Based on a study commissioned by the USDA, economists report that compliance leads to billions in net economic costs. 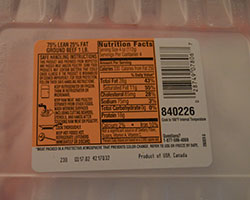 MANHATTAN, Kan. – Any policy that results in higher costs of compliance without a quantifiable benefit will likely have an adverse economic impact, and recent research shows mandatory country-of-origin labeling, or MCOOL, is one such policy.

The U.S. Department of Agriculture (USDA) assigned the research, based on a requirement in the 2014 Farm Bill to quantify the market impacts of MCOOL. The requirement included studying both the implementation of MCOOL in 2009 and a revision of the policy in 2013.

Agricultural economists Glynn Tonsor and Ted Schroeder from Kansas State University and Joe Parcell from the University of Missouri completed the research and issued the full report to government officials May 1.

The researchers found no evidence of meat demand increases for MCOOL covered products—those products sold at retail locations such as supermarkets. Because general meat demand has not increased, and the meat industry as a whole has experienced lower quantities and higher costs to implement the additional labeling procedures, MCOOL has led to net economic losses.

Tonsor said the research involved compiling literature from MCOOL studies and other non-peered reviewed information such as comments regarding cost impacts. The researchers used economic models to quantify price and meat quantity estimates over the next 10 years based on the 2009 and 2013 rulings. They compared those findings to 2008, which provided estimates if MCOOL had never occurred.

Tonsor pointed out that approximately 16 percent of pork and about one-third of beef production is covered by MCOOL, as some products such as those sold in restaurants are not required to bear the label. MCOOL covered beef would have to see at least a 6.8 percent increase and covered pork a 5.6 percent increase in demand to avoid an adverse economic impact.

The researchers had to study 2013 separately because the MCOOL policy changed. The 2009 ruling led to labels such as "Product of U.S. and Canada" showing up on a package of beef, for example. The 2013 ruling required that same package to read more specifically, "Born in Canada, Raised and Slaughtered in the U.S."

"We added the specificity of 'Born, Raised and Slaughtered' stages in 2013, which means additional costs with additional precision," Tonsor said. "But, it's not the same level of costs as we had the first round in 2009. There's an incremental additional cost, but it isn't as large as the original cost to be in compliance."

The poultry industry, he said, was the only one to show a gain. Those gains for 10 years were $753 million for 2009 and an incremental addition of $67 million for 2013. The gains, however, were narrow compared to the billions in losses to the beef and pork sectors that mean a total loss for the meat industry as a whole.

"The main reason is (the poultry sector) doesn't have the same cost of compliance, so at the retail level there is some shift away from more expensive beef and pork prices over to poultry products," Tonsor said. "That serves as a pull for more production on the poultry side, and the poultry industry benefits."

What the future has in store

The World Trade Organization is expected to make an announcement later this month about the future of MCOOL. Some groups and political leaders believe the USDA should repeal MCOOL, while others advocate that the United States has the right to label origin on foods sold in the country.

Tonsor said another approach is to make the policy voluntary.

"Our report and the literature synthesis in it points to a voluntary approach being better," he said. "Watching this situation, I agree that voluntary labeling would be an improvement from where we are now. It's hard for me to say if politically that is where we will be a year from now or three years from now."

To access the full report, visit Economic Analysis of Country of Origin Labeling (COOL). A video interview with Tonsor is available on the K-State Research and Extension YouTube page.