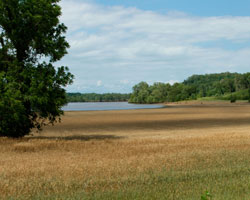 MANHATTAN, Kan. – A team of researchers including a Kansas State University professor has released results of a study that measures the effects of climate change on wheat yields, findings that may have implications for future wheat breeding efforts worldwide.

Agricultural economist Andrew Barkley, who has studied wheat for nearly 30 years, said that the team's major finding is that heat appears to be more damaging to wheat yields than freezing temperatures.

"There's a lot of evidence to suggest that temperatures will increase in the future," Barkley said. "What we've done here is estimate the impact of what might happen to wheat yields if temperatures increase in Kansas."

In Kansas, the country's most productive wheat-growing state, farmers plant winter wheat in the fall and harvest it in late spring and early summer. The nine-month growing season makes the crop susceptible to many temperature swings.

If temperatures continue to rise, as climate patterns currently suggest, wheat yields may be damaged in the spring when flowering and grain filling occur.

"In Kansas, wheat is extremely important economically; crops are worth up to $3 billion per year just in Kansas, and we produce about 15 percent of the wheat that is grown in the U.S.," Barkley said. "So we're interested in wheat for several reasons, but with climate change, we're concerned about the potential impact of that on wheat in the future."

Barkley added that more recently released varieties of wheat – which are normally higher yielding – are less heat resistant than older varieties. For farmers, it could force a decision about using those pest- or disease-resistant varieties and accepting the risk of losing yield to high spring temperatures.

"Our research points to developing genetic strategies to identify the exact genes and DNA that will help us change the wheat plant so that it can accommodate for heat," Barkley said. "At this time, the [Kansas State] agronomy department is working on that exact thing."

From 1985 to 2013, breakthroughs in wheat breeding helped Kansas farmers improve their yields by 27 percent, according to Barkley. "We've had huge success in increasing the amount of food we get from each acre in Kansas," he said.

Knowing that rising temperatures threaten that success, though, is "good news, in a way," Barkley noted.

"As we progress, we are going to be able to deal with these changes in temperature as they arise. Climate change is a slow process, and wheat breeding also is relatively slow, but there's been major advances in wheat breeding, so that we can change the average time it takes to develop a new variety from over 10 years to about half that time. We really have a positive forecast of changing these wheat varieties to accommodate for the heat."

The study is published in the May 11 Proceedings of the National Academy of Sciences. Other researchers on the team include Jesse Tack of Mississippi State University and Lawton Lanier Nalley of the University of Arkansas.