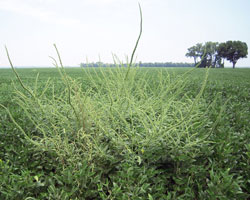 MANHATTAN, Kan. – A mystery has been solved by Kansas State University scientists, and as a result agricultural producers struggling to control one of the toughest weeds around will benefit.

For several years, agricultural producers and professional agronomists in Kansas had noticed that the effectiveness of a recent class of herbicides in controlling an aggressive pigweed species called Palmer amaranth seemed to depend on temperature. The popular "HPPD-inhibitor" class of herbicides would control Palmer amaranth well under cool conditions (less than 80 degrees F), but often were less effective as temperatures increased into the upper 80s and into the 90s, said Curtis Thompson, K-State professor and weed management specialist.

But why? Were the observations real, or just a coincidence? If real, this phenomenon would have significant implications for spray timing and possibly even crop selection. To answer the question, it was important to discover and explain if indeed any physiological or molecular mechanisms are involved in such response.

K-State scientists have now provided the answer. In a new paper published in the online journal PLOS ONE, K-State assistant professor and weed physiologist Mithila Jugulam and her team have shown the physiological and molecular mechanisms for this temperature effect. The research explains what is going on within Palmer amaranth plants at different temperatures and how it influences the effectiveness of HPPD-inhibitor herbicides.

HPPD-inhibitor herbicides kill plants by blocking the activity of the critical HPPD (4-hydroxyphenylpyruvate dioxygenase)- enzyme. Without a sufficient level of activity of the HPPD enzyme, the plants cannot produce certain compounds they must have to survive.

Jugulam and her team tested the level of control of 8- to 12-inch-tall Palmer amaranth when sprayed with mesotrione, one of the most widely used HPPD-inhibitor herbicides, under three temperature schemes:

They found the efficacy of mesotrione in blocking the HPPD enzyme in Palmer amaranth was decreased when the weed was grown under high temperature stress. The plants survived when they should have died. And by tracking the chemical compound within the plants under different temperature schemes, the K-State scientists were able to explain specifically why this is happening.

"Also, when temperatures are elevated Palmer amaranth HPPD enzyme activity is increased , making it harder for the HPPD-inhibitor herbicides to block the activity of all the HPPD enzymes in the weed," she added.

Both mechanisms are important in determining how effective mesotrione herbicide will be on Palmer amaranth, she said.

"This explains why the herbicide in the field is more consistent in controlling Palmer amaranth when applied earlier in the growing season, or when applied in the morning rather than the afternoon later in the season when afternoon temperatures are high," Jugulam said.

This is what producers and agricultural service providers see from time to time in the field, Thompson said.

"In general terms, mesotrione seemed to be a little inconsistent in its effectiveness on Palmer amaranth, and we didn't know why," Thompson said. "Mesotrione seemed to be more consistent in controlling Palmer amaranth when used earlier in the season for corn production than when used later in the season for grain sorghum production. We needed to know if we were dealing with herbicide resistance or something else.

"When weeds known to be susceptible to a certain class of herbicides are not controlled by that herbicide, our first thought is often that the weeds might have developed resistance to that class of herbicides. That's not always the case," Thompson said.

If the weeds have become resistant to a herbicide – and some populations of weeds have developed true resistance to HPPD-inhibitor herbicides – then producers have to start using other types of weed control practices on those populations, Thompson explained.

"Now we know for sure that the temperature at application time is an important factor in the effectiveness of this HPPD inhibitor herbicide on Palmer amaranth, and we can provide a good explanation for why sometimes Palmer amaranth is not controlled. This is a significant finding for everyone in the field trying to control this weed, which has become an ever greater problem in Kansas," he added.

Other K-State scientists from the Department of Agronomy involved in the project included research associates Amar Godar, Vijay Varanasi, and Sridevi Nakka; and professor Vara Prasad.

The PLOS ONE journal article, titled "Physiological and Molecular Mechanisms of Differential Sensitivity of Palmer Amaranth (Amaranthus palmeri) to Mesotrione at Varying Growth Temperatures," can be accessed online.