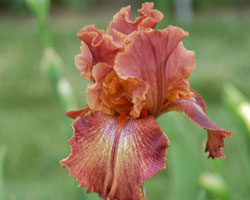 MANHATTAN, Kan. – Showy, elegant, and easy are terms that describe bearded iris flowers, and because they grow so well in the heartland, it’s a good idea to divide them every few years, according to Kansas State University horticulturist, Ward Upham.

Bearded irises are well-adapted to this part of the country, said Upham, who coordinates K-State’s Horticulture Rapid Response Center and the K-State Research and Extension Master Gardener Program.  Because they multiply so quickly, after several years the centers of the iris clumps lose vigor and flowering occurs toward the outside. Dividing them every three to five years will help rejuvenate them and increase flowering.

Iris may be divided from late July through August, but late July through early August is ideal.  Because iris clumps are fairly shallow, it is easy to dig up the entire clump, he said. The root system consists of thick rhizomes and smaller feeder roots.

A few steps now can mean beautiful iris for years to come, he said.

1) Use a sharp knife to cut the rhizomes apart so each division consists of a fan of leaves and a section of rhizome. The best divisions are made from a double fan that consists of two small rhizomes attached to a larger one, which forms a Y-shaped division. Each small rhizome has a fan of leaves. The rhizomes that do not split produce single fans. The double fans are preferred because they produce more flowers the first year after planting. Single fans take a year to build up strength.

2) Rhizomes that show iris borer or soft rot damage may be discarded, but you can physically remove borers from rhizomes and replant if the damage is not severe. Mild cases of soft rot can be treated by scraping out the affected tissue, allowing it to dry in the sun and dipping it in a 10 percent solution of household bleach. Make the bleach solution by mixing one-part bleach with nine parts water. Rinse the treated rhizomes with water and allow them to dry before replanting.

3) Cut the leaves back by two-thirds before replanting. Prepare the soil by removing weeds and fertilizing.

A K-State Research and Extension video showing how to divide iris is available at Iris: Dividing.