Give me more of the good fat 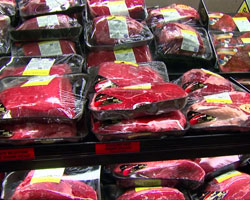 MANHATTAN, Kan. – Many people know that omega-3 fatty acids have considerable health benefits, including aiding in heart health. Heart disease accounts for roughly 600,000 deaths every year in the United States, according to Sean Fox, agricultural economist at Kansas State University.

Consumers could help decrease their risk of heart disease by consuming more omega-3 fatty acids, commonly found in foods such as fish and some nuts and seeds. Research at Kansas State examined the potential of adding beef, enhanced with omega-3 fatty acids, to that list of foods and if consumers would be willing to pay a premium for the enhanced product.

“The momentum behind this idea would be the nutritional attribute that beef producers could potentially use to enhance the demand for beef,” Fox said.

He explained that the American diet is low in omega-3 consumption. Salmon is a primary source of omega-3 fatty acids, but fish consumption levels are low. U.S. consumers eat, on average, about 16 pounds of fish per year compared to 63 pounds of beef, according to the U.S. Food and Drug Administration.

Enhancing beef with omega-3 fatty acids, Fox said, could provide an opportunity for the industry. While beef is already a popular source of protein, adding nutrition to beef products by enhancing the omega-3 levels could increase consumers’ demand for beef.

The science behind fortification

Fortified foods are foods that have added micronutrients. Calcium, for example, is a mineral essential for bone growth in humans. Although perhaps most notably a mineral in dairy products, it is often added to fortify other foods, such as orange juice.

The fortification of omega-3 fatty acids in beef would occur in the cattle feeding process – adding ingredients that are high in omega-3s to the animal’s diet in the feedlot. Fox said this has been done in the past using flaxseed as the added ingredient, and omega-3 beef products have been on the market for a while. The feeding process, however, can be adjusted to add more omega-3 health benefits.

“There are different types of omega-3s,” he said. “They are known by the acronyms ALA, EPA and DHA. ALA is the most common.”

ALA, or alpha-linolenic acid, is often found in plant oils, such as those in walnuts and flaxseeds. EPA, eicosapentaenoic acid, and DHA, docosahexaenoic acid, are more common in fish, according to eXtension.

“When you add flax to the diet for animals, you enhance the ALA levels in the beef,” Fox said. “But, it turns out that the EPA and the DHA, the ones that are found in salmon and other fatty fish, are the ones that have the greatest health benefit (to humans).”

Fox said that K-State animal scientists have found adding an algae extract to the beef diet can enhance levels of EPA and DHA in the beef product.

Fox and a graduate student conducted a survey of consumers across the nation to gauge their response to a new style of a beef product, enhanced with omega-3s, should it become common in the market. They also aimed to find what consumers would be willing to pay for it compared to other beef products.

The researchers found that for ground beef and steak specifically, the survey showed an increased preference for grass-fed beef over the omega-3 enhanced beef. Prior studies have shown grass-fed beef to have somewhat higher levels of omega-3s compared to conventionally raised beef. However, the survey also showed a demand for the omega-3 enhanced product, and that people were willing to pay a premium for it.

“The average premium for steak was around $3.70 a pound for grass-fed steak compared to conventional steak,” Fox said. “When we looked at the omega-3 enhanced product, the average premium was in the ballpark of $1.85 a pound. That is a premium over and above what they were willing to pay for the conventional product.”

There was a similar trend for ground beef. Fox stressed that the numbers are lower due to ground beef being a lower-value product with a lower baseline price: “For ground beef, the average premium for grass-fed beef was $1.27 a pound compared to about $0.79 a pound for the omega-3 enhanced product.”

While Fox and his colleagues are still unsure why consumers in the survey gravitated toward grass-fed beef, they suspect that consumers may perceive grass-fed beef as a more natural product and having additional attributes such as enhanced animal welfare.

Fox said there is still work to be done if the beef industry chooses to move forward in offering omega-3 enhanced beef products, as the cost of enhancing the beef has not been analyzed.