The International Year of Soils: Soils Protect the Natural Environment

As the world’s largest filter, soils help support the beauty and usability of other natural resources in rural and urban areas. 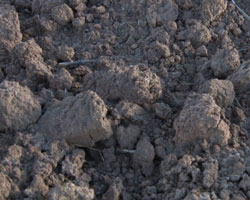 MANHATTAN, Kan. – Managing the health of the world’s largest filter – soil – means protecting the larger environment and the other resources it contains. Clean water and clean air are dependent on having a healthy soil for a particular environment, whether that environment is rural or urban.

“Having a healthy soil is important to the environment from a number of aspects,” said Peter Tomlinson, assistant professor of agronomy at Kansas State University. “We need a healthy soil so we can efficiently grow our food crops. Healthy soil has good water-holding capacity, so when we have large rain events, water is able to rapidly infiltrate into the soil, and we minimize the amount of runoff.”

Reducing soil runoff, also called soil erosion, in rural areas is important to keep nutrients in fields to help with food production rather than losing these nutrients to other areas, such as lakes, rivers and other water resources. In urban areas with man-made surfaces such as roads and sidewalks, proper stormwater management is crucial.

“Soil purifies water,” said Gary Pierzynski, head of K-State’s Department of Agronomy. “In a stormwater management system in a community, you can direct some of that surface runoff to areas where it can interact with soil. A rain garden is a good example. You can actually take pavement – an impervious surface – and increase the permeability by providing spaces for water to percolate through, then gather that water and direct it to an area that is vegetated.”

“Water is transpired back to the atmosphere by the plants, or slowly discharged into subsurface soil layers or perhaps to surface water after a fair amount of cleansing has already occurred,” he added.

All people can do their part to ensure soil and environmental quality. “Soils Protect the Natural Environment” is the September theme for the 2015 International Year of Soils.

Much activity occurs below our feet, which can make soil a fascinating natural resource for many people. Quality soils rely on microorganisms such as fungi and bacteria, to larger organisms, such as earthworms, for nutrient cycling and environmental protection.

“The collection of diverse organisms inhabiting a soil work together to transform our plant residues and decompose them into available nutrients for future crops,” Tomlinson said.

The main three nutrients needed in the soil for crop production are nitrogen, phosphorus and potassium, he said. Once plants finish their life cycle, their residues return to the soil surface. Microorganisms break down the residues and help return nutrients back to the soil, so these nutrients are available to another generation of plants.

This cycle is continual in many prairie systems and conservation areas, Tomlinson said, but in agricultural systems, people should recognize the removal of some nutrients in the grain or hay that is harvested.

“We need to add back to the system nitrogen, phosphorus and potassium to continue to maintain the health of soil,” he said.

Soil tests can help with balancing soil nutrients. In grazing systems, the nutrients are often placed back into the soil naturally through livestock manure, Tomlinson said. People can also apply manure or commercial fertilizers to enhance soil.

Diversity of plant species is also important for soil quality, he said. Legume species can help fix nitrogen in the soil, for example.

Pasture burning in the spring is a way to accelerate the nutrient cycle in rural areas, Tomlinson added. It provides for a flush of nutrients – carbon, nitrogen, phosphorus and potassium – for the next growth cycle in the prairie.

“I often say that soils are much like the plumbing or electrical system in your home. You don’t miss them until they don’t function properly. That’s in the case for soils in urban and agricultural environments,” Pierzynski said.

The more green space available in urban areas, the more support soils can provide to environmental health in those areas. That’s because soils can absorb stormwater and not allow it to flow directly into other bodies of water that are used for drinking, irrigation, recreation and many other needs.

“The old way of dealing with stormwater was gathering it from the streets and parking lots and discharging it into creeks, lakes and other sources of water,” Pierzynski said. “What happens in that situation is any contaminants in the water, which could include any chemicals or fertilizers used around the home or anything that spills on the streets, such as fuels or oils, go into the stormwater and straight into that larger body of water.”

Soil helps purify water in three ways: physically, chemically and biologically. The physical process of filtration is similar to running a liquid through a screen that separates the solid particles out, he said. Many of these particles are sediments and organic materials that become part of the soil fabric and don’t pose concerns to soil quality.

He said that chemically, soils can bond to contaminants and hold them in place. This helps reduce any harmful chemicals from entering the groundwater supply.

“Microorganisms that are either present in the soil or perhaps whose activities are enhanced by plants can degrade compounds (in stormwater) and convert these to less harmful substances, most times to carbon dioxide and water that are returned to the atmosphere,” Pierzynski said.

While urban planners can help by adding more green space, homeowners can help protect the environment by providing adequate but not excessive nutrients to keep landscape materials in good condition and increasing organic matter content to allow for the rapid infiltration of water.

To watch a video interview about “Soils Protect the Natural Environment” that features Tomlinson and Pierzynski, log on to the K-State Research and Extension YouTube page. The Soil Science Society of America has numerous resources for the public, teachers and children about soil and each monthly theme for the International Year of Soils.

MANHATTAN, Kan. – As Gary Pierzynski spoke on the reasons behind World Soil Day and the 2015 International Year of Soils at an event in Manhattan, Kansas, he described soil as “more than a mixture of things” that creates a resource “greater than the sum of its parts.”

Pierzynski, a university distinguished professor and head of the Department of Agronomy at Kansas State University, was one of the featured speakers at the event that celebrated the International Year of Soils and kicked off the 12th International Phytotechnologies Conference on Sept. 27.

Soil is a resource that has many purposes, he explained. It provides for food production, human health in the form of developing antibiotics and other medicines, a home for creatures big and small, water purification and cultural significance, just to name a few.

Pierzynski said the purpose of World Soil Day, hosted on Dec. 5, and the 2015 International Year of Soils is to increase the awareness worldwide of the importance of soils for food security, agriculture, mitigation of climate change, poverty alleviation and sustainable development.

Chuck Rice, also a K-State university distinguished professor and renowned soil scientist, spoke at the event about the Food and Agriculture Organization of the United Nations’ Global Soil Partnership (GSP), in which he is involved. Rice said every continent on earth has issues related to soil loss and soil quality.

Some of the soil concerns, he said, derive from erosion, the decline in organic matter, contamination, paving, compaction, loss of biodiversity, salinization, and floods and landslides. The GSP aims to address these and other issues to maintain healthy soils required to meet the needs of a growing world population.

Following Rice’s presentation, Ravi Naidu, director of the Cooperative Research Centre for Contamination Assessment and Remediation of the Environment and University of Newcastle, Australia, posed a question to the audience: “What would the planet be without soil?

Naidu elaborated on the need for soils in food security and ecosystem services, including carbon storage. He also reiterated how soils are the basis of many ancient religions and civilizations, as well as serving as a storage reservoir for water and a home to millions of organisms.

At the end of his presentation, Naidu said providing for the needs of 9 billion people – the expected world population by 2050 – without ruining the biosphere will be one of the greatest challenges we have ever faced.

The final event speaker was John Floros, dean of K-State’s College of Agriculture and director of K-State Research and Extension. He said in addition to meeting the food needs of the 9 billion, we must take into account consumers’ wants and needs.

Floros described the food system as “complex” and that it has taken thousands of years to get to the system we have today. A food scientist by training, he said more research must be done to continue improving the food system.

Doubling food production in the next 50 years while decreasing inputs such as water and land used to grow food will require research in food consumption patterns, preventing food loss and food waste, maintaining our natural resources and protecting the environment, and educating consumers about food safety and the integrity of the food supply.

The event ended with a panel discussion with experts fielding questions from the audience. The International Phytotechnologies Conference will continue through Sept. 30 in Manhattan.