Cropland conversion could have troublesome effect on conservation

Examining conservation following the biofuels boom in the last decade 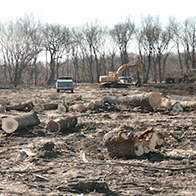 MANHATTAN, Kan. – Federal agricultural and energy policies introduced as part of the biofuels boom of the late 2000s may have had adverse effects on conservation, according to a recent study from the University of Wisconsin. The research paper, "Cropland Expansion Outpaces Agriculture and Biofuel Policies in the U.S.," documents how policy thought to be good for the environment can sometimes have undesirable consequences.

In fact, regional satellite-based studies suggest that the U.S. landscape could be experiencing the greatest transformation to cropland since the "fencerow-to-fencerow" farming era of the 1970s, and the Dustbowl of the 1930s. The study found that between 2008 and 2012, an estimated 7.34 million acres of land was converted to crop production.

Land sources of recently converted cropland varied within the study, but grasslands pulled ahead as the source of most new cropland at about 77 percent. Eleven percent of the land was converted from shrub land and forest, 8 percent from idle land, and 4 percent from wetlands or other land. The study doesn't take into account conversions of 15 acres or smaller.

In 31 of the 47 states that saw conversion, corn was the first crop planted on newly converted land. Corn and soy were the most frequently planted crop on newly cultivated land in the agricultural belt of the Midwest.

The study also suggests that an estimated 42 percent of the expansion of cropland may have come from land leaving the Conservation Reserve Program (CRP), which raises another policy question. The CRP, administered by the U.S. Department of Agriculture's Farm Service Agency, is a cost-share and rental payment program that pays a yearly rental amount to farmers in exchange for removing environmentally sensitive land from agricultural production.

According to the USDA FSA's document "Expiring Contract Options for CRP," landowners with expiring contracts have various options for managing the land aside from returning it back to crop production, including converting it to wildlife habitat or conservation easements. Both actions would provide for the continued protection of natural resources and benefit conservation.

Why does this matter to Kansas and other states? "These land-use changes often occur in areas where we need permanent vegetation such as trees and grasslands to protect our streams and rivers," said Bob Atchison, rural forestry leader for the Kansas Forest Service at Kansas State University. "This vegetation improves our water quality and sustains our water supplies."

Removal of streamside forests has been documented in northeastern Kansas. According to geospatial data collected and analyzed by the Kansas Forest Service, on one stretch of the Delaware River an estimated 21 acres of streamside forest have been bulldozed.

The Delaware is a major tributary of the Kansas River and forms Perry Reservoir, a major regional lake for outdoor recreation and watersports 20 miles northeast of Topeka. Without streamside vegetation present to stabilize riverbanks and reduce sediment entry into the reservoir, the lake is slowly filling up with dirt.

"Reducing sediment from our water supply is an important job because more than two-thirds of Kansans get their water from federal reservoirs, and that percentage is growing," said Mitch Lundeen, former water quality forester with the KFS. "As sediment replaces water, this leads to loss of capacity in these reservoirs, and as the demand for water grows, shortages could become a possibility."

The expense to dredge these lakes is enormous, as is the cost of building new ones, so it's imperative that conservation practices are put into place before it's too late.

"Streambank stabilization is so important, as it is cheaper to keep the sediment out of the lake in the first place, instead of having to deal with it after it's already there," said Katie Ingels, communications director for the Kansas Water Office. "Once lakes get to a certain point though, you have to address the sediment that's already in place. This is where we are with John Redmond now, and where we're heading with other lakes here in the near future."

The John Redmond Reservoir, about 70 miles south of Topeka, is currently the subject of a dredging project due to sedimentation and loss of capacity.

"As of today, the total cost when you factor in dredging costs for removal of 3 million cubic yards of sediment, leasing of sediment disposal sites, construction of those disposal sites, and re-vegetation after use, has the project at nearly $19 million," said Ingels. "The current sedimentation situation at Redmond, and how that loss of capacity impacts downstream water users has prompted the need to address this situation now."

"Our government has invested, and will be investing huge amounts of money to dredge federal reservoirs and stabilize streambanks above those reservoirs, Atchison said. "It only makes sense from an economic perspective to develop policy and incentives that protect riparian forests above these reservoirs."

According to the University of Wisconsin study, loss of shelterbelts and windbreaks is also occurring throughout Kansas and the Great Plains due to cropland expansion. In western Kansas and the panhandles of Texas and Oklahoma, many highly-concentrated areas of cropland expansion can be observed. In these places, establishing center-pivot irrigation over the rapidly depleting Ogallala aquifer, which stretches across eight Great Plains states, is of substantial concern.

"This practice raises huge sustainability questions," Atchison said. "The research supports that shelterbelts can actually increase crop yields and are often the last conservation practice to prevent soil erosion during a drought."

"Protecting streamside forests and shelterbelts from cropland conversion will provide both public and private benefits to all Kansans," Atchison said. "Good, sound policy is needed that supports our agricultural community which provides us our food, and at the same time, protects our natural resources and benefits conservation."

A conclusion suggested by the results of the Wisconsin study was that removal of adverse incentives, and proper implementation of U.S. agricultural and biofuel policies would go a long way toward achieving this end.

Contact the Kansas Forest Service for more information about protecting the woodlands and windbreaks of the state, or go online to www.kansasforests.org.