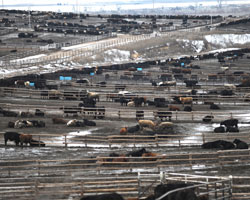 MANHATTAN, Kan. – Infectious and contagious diseases in livestock production can be devastating to those who are directly and indirectly involved in agriculture. In addition to the hardships associated with taking care of the diseases themselves, people also have to consider the potential economic impact.

One of the most economically important diseases is foot-and-mouth disease (FMD), a severe, highly contagious viral disease that can cause illness in animals with divided hooves, such as cows, pigs, sheep, goats and deer, according to the U.S. Department of Agriculture's Animal and Plant Health Inspection Service. Although it is not a human health or food safety threat, FMD could lead to significant economic losses from depopulation of infected or potentially infected livestock and trade shutdowns.

While FMD has been found in some parts of the world, North America, Central America, Australia, New Zealand, Chile and many European countries do not have the disease, according to APHIS, but the potential for the disease exists globally. Simulation models can help prepare for potential outbreaks, such as the one used in recent research led by Dustin Pendell, a Kansas State University agricultural economist who specializes in animal health economics.

Pendell used output from FMD spread models to examine the economic impact of an outbreak under 15 different emergency vaccination strategies in the U.S. Midwest. The models included economic linkages from different species of livestock and crop production all the way to the final consumer, including international trade partners.

If a FMD outbreak were to occur in this region and no emergency vaccination program was implemented, the research found estimated losses to producers and consumers at approximately $188 billion and additional government losses at $11 billion due to controlling livestock movement and depopulating infected livestock.

However, if an aggressive emergency vaccination program was implemented, such as a 50-kilometer (31-mile) vaccination zone where livestock were vaccinated at a rate of 50 herds per day at day 22 and 80 herds per day at day 40 from the onset of an outbreak, the economic losses would be reduced significantly to $56 billion for producers and consumers and $1.1 billion in governmental costs.

Results of the research are included in a report available online titled, "Economic Impact of Alternative FMD Emergency Vaccination Strategies in the Midwestern United States." The research was part of a larger project that examined the continuity of feedlots in the Midwest if there was an outbreak of FMD and also involved K-State agricultural economist Ted Schroeder, veterinarian and epidemiologist in the K-State Department of Diagnostic Medicine/Pathobiology Mike Sanderson and a former graduate student.

How the models worked

Pendell said that while previous research has been done on the topic of FMD emergency vaccinations, these studies examined a smaller region, such as three, eight, or at the most, 15 counties. Their study included a wider breadth of geographic location by including eight states across the Midwest.

The epidemiological models the researchers used are designed to simulate and forecast a disease spread, Pendell said.

FMD vaccines are controversial for many reasons, the research report said, which highlighted another need for the study. The controversies include, but are not limited to, the ability to distinguish between vaccinated and infected animals, delays in regaining lost export markets, costs of the vaccinations, uncertainty in the value of an emergency vaccination program and availability of a vaccine for a certain strain of FMD.

Many economic questions also surround how to determine the best emergency vaccination protocol for FMD, the report added. These questions include whether or not to allow vaccinated animals to live versus depopulating all susceptible animals within a certain radius regardless if they received a vaccine, how to find available personnel to administer emergency vaccines within a specified radius, how to identify infected herds prior to vaccine administration and what vaccination zone is ideal to control FMD.

The study isolated two main drivers of economic impact related to emergency vaccination: vaccination zone and vaccination trigger. The zone refers to the area around an infected herd where all of those animals will be need to be vaccinated. The trigger is how many herds become infected before a particular strategy is implemented.

The study examined different sized vaccination zones including a 10-km (6-mile) range versus a 50-km (31-mile) range. This affected the number of animals that were depopulated, according to the research report. By increasing the size to 50 km, average losses to producers and consumers due to a FMD outbreak were reduced by 48 percent.

An additional 10 percent in savings was realized by increasing the vaccination capacity at days 22 and 40 following a FMD outbreak, which recognized cattle producers would be the ones vaccinating the higher number of livestock in their own herds.

Because of the estimated economic losses found in the research, Pendell suggests adopting an emergency vaccination approach to protect and prepare the industry and markets for a potential FMD outbreak could be warranted in certain situations.

"We hope this information and any other research that we do in the animal health arena is going to help in case something happens in the future," Pendell said. "This is intended for policy makers, animal health officials and producers to use in making better policy decisions on vaccinating, and in this particular case, emergency vaccination for foot-and-mouth disease."