Safety protocols in place during processing and tips for ground meat safety in the home. 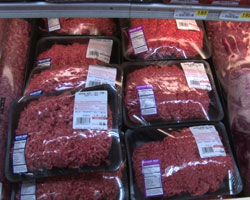 MANHATTAN, Kan. – A popular food product that many consumers enjoy preparing in different ways, ground meat is often considered versatile and affordable. In the United States, consumers on average eat about 60 pounds of beef every year, of which about 42 percent is in a ground form, said Travis O'Quinn, a meat scientist at Kansas State University.

But despite its popularity, studies that have shown contaminants in ground meat, particularly ground beef, coupled with recalls might make consumers question ground meat safety. While contamination is a possibility, O'Quinn said that responsibility in preventing foodborne illness should be shared by everyone involved in the production chain to the consumer's plate.

While meat contamination is at times a prominent concern, any food product could potentially have contaminants, which is why safe handling practices are important, said Londa Nwadike, food safety specialist for K-State Research and Extension and the University of Missouri Extension.

When grinding meats, Nwadike said, the outside surface of the product—where contamination is most likely to occur—is mixed with the untouched inside. If any contaminants are mixed in, they have the potential to multiply quickly. Contaminants that could be found include pathogens such as E. coli and salmonella, among others.

The two experts provide information that consumers should know about what industry safety measures are in place currently to prevent foodborne illness from the ground meat supply and how consumers can do their part to protect themselves.

Safety in beef processing and packing

O'Quinn, who is also a fresh meat quality specialist for K-State Research and Extension, said ground meats such as beef are tested throughout the processing and packing process to help ensure any meat that could be contaminated doesn't make it to the consumer. Therefore, recalls that occur mean the industry's system is working to protect consumers.

"Ground beef is highly regulated," O'Quinn said. "Both the company that produced the product and the U.S. Department of Agriculture (USDA) send it for microbial testing to ensure that no bacteria of concern, specifically pathogenic E. coli, are in that product."

That doesn't mean all contamination is identified, he said, but the meat industry takes many precautions to prevent as much contamination as possible.

"Contamination can occur at multiple steps of the harvest process, from the time an animal goes into a packing plant until products go out the other side," O'Quinn said. "We might think most contamination would occur on the harvest floor itself. The biggest opportunity for contamination actually occurs when the hide goes off the animal, because contaminants on the outside of the hide have the opportunity to touch the sterile inside surface."

Some examples of preventive measures taken by meat processors, he said, include that before the animals are harvested, they go through a hot water bath cabinet, which is essentially a hot water mist. Before the hide is removed, they again go through a hot water bath to remove as much of the potential contamination on the outside of the hide as possible. In the hide removal process, plastic and other barriers are put on the hide to further prevent potential contamination.

"Once the hide is removed, the carcasses go through another hot water bath cabinet, in which (processors) spray 180 degree (Fahrenheit) water on the outside of the carcass to hopefully kill as many bacteria that may be there," O'Quinn said.

"Many times before that carcass is ever fabricated, or even when the meat goes into packages, it's typically sprayed with some form of antibacterial, such as citric acid or lactic acid," he added.

Consumers often have the misconception that if they grind meat at home, there's no potential for contamination, O'Quinn said, which is "absolutely not correct."

"All the types of contamination that we can get from a packing facility, from the outer surface of the meat coming into contact with the inner surface of that meat through grinding, can occur in the home as well," he said.

Nwadike said consumers should make sure not to cross-contaminate cooked meat or other ready-to-eat foods with raw or undercooked meat that could contain contaminants. In addition to preventing cross-contamination, cook ground meats such as beef, lamb and pork to 160 F and all poultry products to at least 165 F. Whole beef, lamb and pork cuts should be cooked to a minimum temperature of 145 F, with a three-minute rest time.

The processes of consumers preventing cross-contamination starts at the local grocery store, farmers' market or butcher, she said. Other safety measures can occur when storing, thawing and preparing meat.

1. Buying meat at the store

At the store, consumers should look for the "best by" date on meat products.

"The 'sell by' date would just be an indicator for the store when it should be sold," Nwadike said. "If it's a 'best by' date, that's the date that you as the consumer could say, 'It's getting close to that date; maybe I won't buy that one if I can't eat or use it before then.'"

Make sure the meat package isn't torn and that it feels cold. After deciding to buy a meat product, make sure to keep it away from other groceries in the cart to prevent meat juices dripping onto other foods. Make the meat counter the last stop at the grocery store and the grocery store the last errand before returning home.

"If it's a long time between when you buy the meat and get it home, you might want to bring a cooler," Nwadike said. "You don't want meat in the temperature danger zone, which is 40 to 140 degrees (F), for longer than two hours."

Bacteria such as listeria can grow at refrigerator temperatures, especially if the temperature creeps up to 50 F, she said.

It's good practice to put raw meat into a plastic bag around the store packaging, so no juices drip into the refrigerator or onto other foods. Put meat on the lowest shelf in the refrigerator and ready-to-eat foods on the top shelves in case dripping occurs.

Any other surfaces that raw meat products touch directly, such as countertops or sinks, should be cleaned and sanitized well.

Nwadike said the best way to thaw any meat is in the refrigerator.

"A lot of people might thaw on the counter or in the sink, but the outside of the product could get up to room temperature while the inside is still frozen," she said. "When a meat product is at room temperature, that's a perfect environment for microorganisms to multiply."

Consumers can also use the microwave to thaw meats, but be sure to cook that meat right away. Don't thaw it in the microwave and try to put it back in the refrigerator.

"You can also thaw meat in cold water, just make sure the water is changed often and is staying cold," Nwadike said. "Don't use hot water. Put a bag around the outside, so the package doesn't leak and you don't get water into your meat."

When cooking, always use a meat thermometer to ensure the product gets to the minimum temperature for doneness for the specific meat product. Color is not a good indicator of doneness, particularly for ground meats.

"I tell people microorganisms don't care what color the meat is; they only care what temperature it's been cooked to," she said.

When dining out, Nwadike recommends that consumers "pass the message that it's important to use temperature as an indicator of doneness" to restaurant staff.

All meat is susceptible to contamination

Consumers have many different meat options, from conventional to grass-fed to organic, among others. The experts said no matter what the source of the meat, there is always a potential for contamination.

"The meat industry is doing its job to make sure meat is as safe as possible, but no matter where consumers are buying their meat products, no matter what the source of the meat is, if microorganisms get introduced, they can multiply," Nwadike said.

The USDA regulates the meat industry in the country, O'Quinn said, regardless of how the animals are raised and marketed. It inspects U.S. meat the same way it inspects meat coming from another country.

"Meat overall in the U.S. is safe due to standards of inspection in place by the USDA," he said. "To be sold in the United States, meat such as beef that is coming from another country must undergo the same stringent inspection process that a product produced domestically must."

A video on ground meat safety that features O'Quinn and Nwadike is available on the K-State Research and Extension YouTube channel.