The International Year of Soils: Soils and the Products We Use

Food, clothing, art and many other everyday products are possible because of soils. 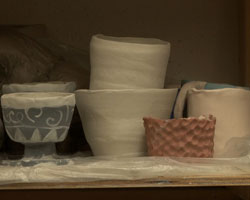 Soils and the Products We Use Video

MANHATTAN, Kan. – Often when we think of items that originate from soils, food-producing plants immediately come to mind. Past that, we might recall that clothing—particularly from cotton—depends on soils, as well as trees and other building materials, such as adobe or drywall.

Products such as fuels, glass, computer chips, cat litter, paper and many forms of art are also connected to soils. Even the coffee cup used for this morning’s caffeine boost was likely made from porcelain, a ceramic created from a particular form of clay.

“Soils and the Products We Use” is the October theme for the 2015 International Year of Soils, which aims to bring awareness of the importance of soils to sustain life in numerous ways.

Soil can be divided into three different particle sizes, said Michel Ransom, professor in Kansas State University’s Department of Agronomy. Sand has the largest particle size. Silt is intermediate in particle size, and clay has the finest particle size. All soils play a crucial role in making products we use every day, Ransom said.

Large-particle soils such as sand are commonly used as foundations for houses and roads. If sand is heated to high temperature, it can make glass and crystal.

“The minerals that occur in clay particles largely supply the ability of soils to retain nutrients that plants use, such as calcium, magnesium and potassium,” Ransom said. “These are many of the same elements we need for our human bodies.”

Even though it has a fine particle size, clay has a large surface area and a net negative electrical charge, Ransom said. This increases its ability to retain water and nutrients, such as calcium, magnesium and potassium that are all positively charged.

“Adobe is a prominent building material in parts of the world that is predominantly made from clay that has been mined,” he said. “Many people have probably seen the adobe buildings in arid to semi-arid parts of the U.S. (Adobe) doesn’t work quite as well in more humid areas, because these areas to have too much rainfall and kind of melt down (the adobe).”

Other building products are made from clay minerals. Gypsum is used to create drywall, or sheetrock, Ransom said. Another clay mineral called serpentine is a major building component of asbestos, which has good insulating abilities but is also potentially harmful if people breathe large quantities of dust that contains asbestos.

Many high-quality papers contain clay minerals, such as kaolinite, Ransom added, which is also a prominent mineral in clay pottery.

The American Indians had known deposits of clay that they would go to and be able to dig out and mine, Ransom said. Typical pottery today is similarly made from special kinds of clays that have been processed, molded and heated to create art.

She said making ceramics is a long process, and working with clay is not easy. But, it’s rewarding to see the art through to the end.

“(Clay) feels a little clumsy at first,” Santoferraro said. “But, the longer you work with it, the more you understand and the better you get.”

Another perk of working with clay and making ceramic art is thinking about how the material is used in other ways to sustain life, she said. This thinking traces back to some of the first uses of clay.

“Very early, people discovered that to get water from the stream to home, if you took clay from the riverbed and lined your woven basket, it would then hold water,” Santoferraro said.

Different types of clay come from different regions of the world, she said. Traditionally, artists would use the clays available locally, but playing with different types can be an adventure.

There are different additions and subtractions artists can make to their clay body, which is why she encourages students to find what suits their needs, whether that’s based on color, workability or plasticity, as examples.

“We work with the periodic table of elements to compose glazes and clay bodies,” Santoferraro said. “So, we are scientists. We maybe don’t go as in-depth in understanding all of the (elements), but we are balancing equations and calculating to make sure we have what we need.”

“That’s what attracted me to ceramics,” she continued. “I thought I was going to be a scientist or doctor. When I found out I could make artwork and still have a bit of a science brain, that’s when it clicked for me.”

To watch a video interview about “Soils and the Products We Use” that features Ransom and Santoferraro, log on to the K-State Research and Extension YouTube page. The Soil Science Society of America has numerous resources for the public, teachers and children about soil and each monthly theme for the International Year of Soils.