Are all yogurts created equal? Not exactly, a nutritionist says 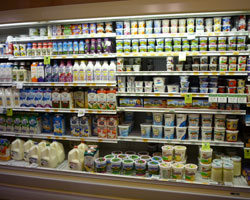 MANHATTAN, Kan. – Greek. Probiotic. Live cultures. Heat-treated. The verbiage on yogurt containers can be dizzying. A Kansas State University nutritionist said that while there are differences in the array of yogurts available, most aid digestibility and have other nutritional benefits.

"The nutrient content of different kinds and brands of yogurt varies a lot for calories, protein, carbohydrate/sugars, fat and other nutrients," said Mary Meck Higgins, human nutrition specialist with K-State Research and Extension. "If yogurt is your go-to dairy food, know that while almost all fluid milk is fortified with vitamins A and D, only some brands of yogurt are. Several brands have extra amounts of probiotics. Many yogurts have added colors and either added sugars or artificial sweeteners. Some have added preservatives and thickening agents. Some yogurt is certified organic. Some are made from soy rather than cow's milk."

"Read the ingredients list and Nutrition Facts label before you buy yogurt," said Higgins, who is also a registered dietitian. "Compare brands, so that you know what you're getting."

"A 6-ounce serving of almost any brand of yogurt is a good source of protein, calcium, riboflavin and vitamin B-12," Higgins said.

Because most yogurts have live and active cultures of probiotics, which are the kinds of bacteria that are beneficial to our health, most yogurts aid digestibility, she said. These bacteria are added to milk as part of the fermentation process involved in making all yogurt. They convert lactose, the naturally occurring sugar in milk, into lactic acid. That gives yogurt its tart and tangy flavor.

If the yogurt is heated after being cultured, it no longer has live probiotic bacteria and is labeled "heat-treated." However, if the yogurt package states it contains "live and active cultures," then it had at least 100 million cultures of live probiotics per gram of yogurt at the time of manufacture.

"Probiotics may prevent both diarrhea and constipation, improve lactose tolerance, reduce gastrointestinal infection and inflammation, improve the immune system, help with digestion, offer protection against detrimental bacteria and help re-establish healthy gut flora after taking a dose of antibiotic medicine," Higgins said. She noted, however, that not enough research has been done to make an evidence-based recommendation on which strains of probiotic bacteria are the most beneficial, nor to give advice on how much or how often they should be eaten to maximize their effect.

Higgins cautioned against eating raw (not pasteurized) yogurt. It puts one at risk for a foodborne illness from disease-causing microorganisms, such as salmonella, E. coli, listeria and Campylobacter.

The method used to make Greek yogurt affects its nutrient content greatly, Higgins said, so different brands vary as to how many nutrients they have.

"If going with Greek-style yogurt, look for one that has about the same number of calories, more protein, less carbohydrate, less sugar and less sodium than a serving of regular yogurt. Read the Nutrition Facts label before you buy," she said.

• Keep yogurt refrigerated. Discard any that has been at room temperature for more than two hours.

• Babies under the age of 6 months should not be given yogurt. Health experts advise offering plain pasteurized whole-milk yogurt to children ages 6 months to 2 years old.

• To be more in control of the ingredients, buy plain yogurt made with just milk and live cultures. If desired, flavor it yourself. Add fruit (chunks, chopped, crushed, pureed, juiced) or mashed avocado, or a small amount of unsweetened cocoa, strong brewed coffee, mint, dill, basil, garlic, vanilla extract or maple flavoring.

• Use plain regular or Greek yogurt as a healthful substitute for sour cream, cream cheese, ice cream or mayonnaise, and for some of the butter or oil in most recipes.

• For the least cost per serving, buy a large container of plain yogurt. When you get home, flavor it, if desired, and transfer it into see-through single-serving-sized reusable containers with tight-fitting lids. Refrigerate them, and enjoy ready-to-eat, easy-to-grab healthful treats whenever you prepare a meal or snack.

K State Research and Extension is a short name for the Kansas State University Agricultural Experiment Station and Cooperative Extension Service, a program designed to generate and distribute useful knowledge for the well being of Kansans. Supported by county, state, federal and private funds, the program has county Extension offices, experiment fields, area Extension offices and regional research centers statewide. Its headquarters is on the K State campus in Manhattan.