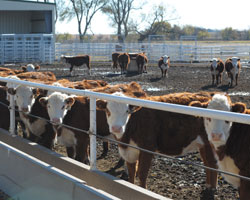 MANHATTAN, Kan. – As the air turns crisp and the leaves change color, replacement heifer selection begins to weigh on cattle producers’ minds. The process can be confusing and stressful for producers, as the decisions made can directly impact the future of their program. Kansas State University animal scientist, Bob Weaber, offers tips to aid producers in selecting heifers with the best likelihood of becoming productive and efficient cows for years to come.

Weaber encourages producers to make appropriate sire selection decisions for building quality replacements. If a producer plans to keep more replacement females, tactical selection of bulls to be sires of replacement heifers that emphasize maternal traits versus other traits is a must.

“If you’ve made an investment in genetics,” Weaber said, “either via bull purchasing or through an AI (artificial insemination) program over the last year, and these replacement candidates are a result of those decisions, certainly those females produced by bulls that have been selected for their maternal traits – maternal calving ease, appropriate mature weight, lactation, stability EPD (expected progeny difference) – should be given priority in your selection criteria.”

Weaber also points out that crossbred heifers typically have a more productive life and possess greater reproductive qualities than their straight-bred counterparts. Therefore, crossbred heifers should be given special consideration as replacements.

Figuring out where heifers were born, in terms of the calving distribution and their weights and performance measures, are key pieces of information, he said.

Weaber provided an example to further explain: “Say you have a heifer calf that was born the last day of your calving season. When she enters your breeding herd, she’s going to be one of the last females to reach puberty, have the fewest opportunities to become pregnant in your structured breeding season, and if she misses by two or three days in the breeding season, she’s out as a 2-year-old.”

“If you’ve invested $1,000 or $1,500 on development costs above her market value as a calf to get that heifer to have her first calf,” he added, “you don’t want to lose her because she missed by two or three days. That’s why we skew our selection heavily toward females born in the first 21 or 30 days of the calving season.”

Feed and other input costs, has some producers concerned about mature cow size and lactation potential. Weaber said it is important to choose replacement females that fit the mature size and maintenance requirements appropriate to forage constraints of the operation.

Over time, he said, many producers have selected heifers that have higher performance and growth traits to meet demands further down the beef value chain. While cattle that grow quickly are an important contribution to the beef production system, producers must be careful not to go too far. With today’s genetics, it is fairly easy to build cows whose nutrient requirements can substantially exceed the nutrients available in a grazed forage environment.

For this reason, he recommends producers keep an eye on maintaining, or in some cases slightly decreasing, the mature weights of their cows.

“Replacement female selection has accelerated our path of maybe making cows too big,” Weaber said. “Our usual practice of walking into the replacement heifer pen leads to selecting ‘the standout.’ The biggest, nicest fleshed, easiest conditioned heifers in the pen are the ones that we naturally want to select.”

“Certainly older heifers have a tendency to be that way because of age,” he continued. “But, we have to be careful that we don’t select heifers that are the extremes in that group, because they represent the highest growth genetics, and likely the highest mature weight out of our cow herd.”

Another factor linked to selecting these “standout” replacements is that they are likely from cows with the highest lactation potential in the cow herd, Weaber said, which leads to increased production and maintenance requirements for these cows.

To combat this trend, he recommends that producers select replacement heifers that reside in the middle of the group for adjusted 205-day weight or adjusted weaning weight. The adjusted weight takes into account differences in age of the heifers and age of their dam.

“To keep the weights of your cows pretty constant, pick the middle third of the heifers in terms of weaning performance,” Weaber said. “Skew that selection to include heifers born early in the calving season to have this optimization of born early in the calving season and from the middle group in weight and performance. That should put a downward pressure on the increase of mature weight.”

An Excel spreadsheet is available at Research and Extension Beef that calculates adjusted birth weights, weaning weights and yearling weights. The spreadsheet requires producers to enter information on their heifers, such as the birthdate or birth week and age of dam.

Another item to consider when selecting replacements is biology. Look for replacements out of mature cows that “fit” the system.

“They ‘fit’ in the production environment, and because of that ‘fit’ they have the ability to reproduce every year,” Weaber said. “Those cows are likely on target in terms of weight, body condition, lactation potential and have obviously been fertile.”

“About three-quarters of the genetic flow of the cow herd is driven by sire selection,” Weaber said. “That doesn’t mean female selection is not important. It can be particularly important if you are trying to limit supplemental feed sources.”

“I encourage producers to sit down and figure out the trajectory that they want to go, understand the data they may need to make that informed decision, collect that data, and then make an informed and thoughtful replacement heifer selection.”