A K-State wildlife specialist speaks on why rodent control is important to prevent property damage and the potential spread of diseases. 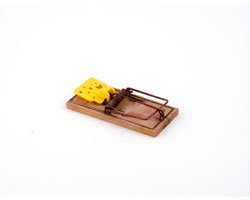 MANHATTAN, Kan. – When warmer days go away, rats and mice come out to play—inside our homes and other buildings. K-State Research and Extension wildlife specialist Charlie Lee said late fall is the time of year when home and farm owners should prepare for rodents seeking shelter in warmer places, and they should also understand the real damage these pests can do.

The Food and Agriculture Organization of the United Nations (FAO) outlines three main reasons why rats and mice are considered pests. They can take a negative toll on our food supply, tear up buildings and possessions, and transmit dangerous diseases to humans.

While food loss can occur throughout the production chain, all the way to the consumer, rodents are a main cause of food loss worldwide. Rodents both eat and contaminate crops, Lee said.

Rice is a staple food source globally, and Lee said rodents eat about 10 percent of all rice produced, which is enough to feed about 350 million people a year. If rats and mice don’t consume crops, contamination in infested areas is another major issue.

According to the Ontario Ministry of Agriculture, Food and Rural Affairs, a rat can contaminate ten times the amount of feed it consumes. A rat produces about 25,000 fecal pellets per year, while a mouse produces 17,000. Rodent urine contaminates as much as or more than the droppings.

The losses have an economic impact. As an example, Lee said each rat on a farm will eat, spoil or damage approximately $25 worth of grain per year. The U.S. Fish and Wildlife Service estimated that in the United States, loss of stored grains and property destruction due to black and Norway rats is estimated to exceed $19 billion per year.

Rats and mice damage structures by burrowing into walls, insulation and under foundations, Lee said. People may not realize that damage until it’s too late, as the creatures tend to come out at night.

Look out for chewed electrical wires, wooden structures and wall material. Rats and mice use many of these materials to create nests. Droppings will indicate the presence of the pests and when action is required to eliminate them from the home or other building.

Rats and mice are responsible for at least 45 different diseases, Lee said, including some diseases harmful to humans that include the hantavirus, leptospirosis and the plague.

Cotton rats, deer mice and white-footed mice can carry hantavirus, which causes a sometimes-fatal respiratory disease called hantavirus pulmonary syndrome, Lee said. According to the Centers for Disease Control and Prevention (CDC), hantavirus is spread by breathing in dust contaminated with rodent urine or droppings; having direct contact with rodents and their urine, droppings or nest material; or even bite wounds from rodents, although they are rare.

Leptospirosis, Lee said, is a potentially fatal bacterial infection that can lead to kidney damage, liver failure and meningitis. According to the CDC, eating food or drinking water that’s contaminated with urine from infected rodents and other animals mainly spreads this disease. Human contact with soil contaminated with urine from infected animals is another method of transmission.

According to Lee, wild ground-dwelling rodents, including ground squirrels, prairie dogs, woodrats and chipmunks, are involved in a cycle with fleas to spread the bacterium that causes the plague—the same plague spread by rats that killed millions of Europeans during the Middle Ages.

Modern antibiotics help combat the plague, but the CDC reports cases exist in the United States, some of which have caused fatalities.

Most rats of concern in the Midwest are the Norway rat, otherwise known as the brown rat or sewer rat, Lee said.

“You can recognize them with having a blunt muzzle and small eyes,” he said. “This rodent does a lot of digging and burrowing.”

“The females are sexually mature at 75 days of age,” he added. “They have fairly large litter sizes of seven to 11. But, because of high birth mortality, they’re only weaning about 20 rats per year.”

House mice, which most people recognize as brownish gray small rodents with a nearly hairless tail, are typically found in areas of good shelter near or in the home itself.

“House mice reproduction is quite different than the Norway rats,” Lee said. “They’re sexually mature at five weeks of age, which is about half the time of a Norway rat. Each pair will produce about 50 young per year, but each litter of offspring will also begin producing young well before year’s end.”

Lee said these two species have been problematic for centuries, and he doesn’t see anything new on the horizon to eliminate the problem. Following the same steps—prevention, sanitation and reduction—are key to controlling the pests.

“It starts with trying to rodent-proof the building,” Lee said. “You do that by closing up places where it’s obvious that they’re getting in.”

“The next step is sanitation, which is simply habitat alteration,” he continued. “Clean up inside and out, particularly pet food and spilled grains.”

“Then finally, the third step is population reduction. Many people rely on trapping, and some rely on toxicant programs.”