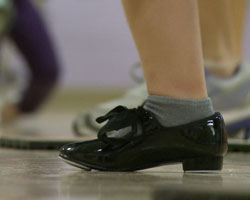 MANHATTAN, Kan. – A partnership among the Kansas State University School of Family Studies and Human Services, K-State’s School of Music, Theatre and Dance, and Parents as Teachers of Manhattan, Kansas, is helping parents and their children to develop healthier relationships one “tap” at a time.

“Tap to Togetherness” is an applied developmental research project that brings together families with young children to learn about tap dance while enjoying a positive physical and engaged activity together, said Bradford Wiles, assistant professor in the School of Family Studies and Human Services.

Goals of the project are for children to learn about different ways of moving, incorporating music and dance into their daily lives, and practicing healthy behaviors. Adults also gain insight into their child’s thinking and learning as they take on tap dancing, and develop positive parenting techniques to ultimately encourage healthy family relationships.

“The cost of participation is extremely minimal because we hope to reach vulnerable families,” Wiles said. “One of the ways you can reach vulnerable families is through providing activities that are low or no cost and do not require equipment. For the program, you don’t need to have tap shoes. If you want to make that tapping noise, you can tape a penny under your shoes.”

Wiles, also an early childhood specialist for K-State Research and Extension, added that there is less gender bias associated with tap dancing when compared to other forms of dancing. One of his colleagues on the project, Julie Pentz, is an associate professor of dance and the director of the K-State Dance Program. Because Pentz is a world-class dancer who has prior involvement with Parents as Teachers, she and Wiles identified it as an avenue to begin working with families.

With the partnership, free tap dancing sessions are provided to help meet the identified goals. K-State students have been involved to help study the project’s success.

“One of the things our (extension) field staff talks about is the disconnect within families,” Wiles said. “There’s a body of new literature about the concept of families being together but alone—sitting in the same room, but individualized because you’re engaged in things that aren’t communal.”

Technology often drives the disconnect, he said. In the Tap to Togetherness project, leaders encourage families to use their smartphones to play music and dance. This means leveraging the technology to engage family members.

“Then you can use music and dance in the home to alleviate the isolation,” Wiles said. “The best part is you can use that device to put on the music we play in Tap To Togetherness. You can use it to learn some of the dance steps.”

“We are finding families are responding by bringing music and dance into their homes,” he continued. “One of the most gratifying parts is that parents are using tap and the music to get the energy out (among their children), and then go on with the evening process.”

Wiles said many adults are also benefiting by rekindling their former interest in dance and are enjoying dancing with their children.

While there is still work to be done studying the success of Tap to Togetherness, some of the initial findings are exciting and could have wide-reaching implications, Wiles said.

The researchers have found that smartphone use by adults has dropped considerably since the beginning of the project. Initially, adults would mostly tend to their phones while tap instruction was in session. The parents’ disengagement seemed to transfer to their children, who tended to be less interested in the activity.

“We are getting evaluations from parents who are saying they are using their smartphones less, while using music and dance more as a way to fill the down time with their children, or to keep them from watching television or using a smartphone or tablet as entertainment,” Wiles said.

Another finding is the difference in the style of participation among cultures. Ethnically diverse families, or non-white families, tended to have both parents and any siblings involved in the activity. These families were also more hands-on with their children and often manipulated their limbs for them. Wiles stressed the importance of recognizing cultural differences in education.

There was also a noticeable improvement in child motor skills, balance and the ability to follow directions since the beginning of the project. Adults indicated that the project has increased family use of music and dance in the home, that they enjoyed having something new to learn with their children and that their children have benefited from interacting with other children in the program.

A video feature about Tap to Togetherness is available on Kansas State University’s YouTube page.