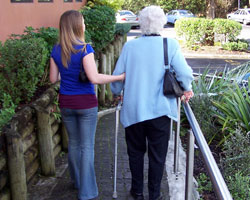 MANHATTAN, Kan. – More than 5 million people in the United States have Alzheimer’s disease, according to the Alzheimer’s Association. Not only is Alzheimer’s disease the sixth leading cause of death in the country, but it also currently cannot be prevented, cured or slowed. With the U.S. population aging, it is estimated that by 2025, the number of people age 65 and older with Alzheimer’s will surpass 7 million. By 2050, the number could reach 16 million.

Mirroring the national statistics, Alzheimer’s disease is also the sixth leading cause of death in Kansas, said the Alzheimer’s Association. About 12 percent of Kansans currently have the disease or related dementia.

Erin Yelland, assistant professor in the School of Family Studies and Human Services at Kansas State University, said there are 10 main signs of Alzheimer’s. If signs seem to be there, the first thing to do is contact a primary care physician. Early diagnosis is important.

“Alzheimer’s disease is predictable,” said Yelland, who is a a K-State Research and Extension adult development and aging specialist. “We know certain issues are going to come up, and we know the process of decline that you might be experiencing. By educating yourself, you can understand what might be happening, but more importantly, your family members are going to understand what they are going to experience while you’re battling this disease.”

The 10 signs, according to the Alzheimer’s Association, include:

The first early sign of Alzheimer’s disease is memory loss and an evident decline in cognitive function, Yelland said. People in early stages might forget important dates or events, ask the same information repeatedly, or need to rely on notes or family members to provide reminders for things they used to do on their own.

Experiencing some memory loss and forgetfulness as we age is normal, Yelland added, but Alzheimer’s disease brings more dramatic instances of memory loss that disrupt daily life and functioning.

2.      Challenges in planning or solving problems

Concentrating might become more of a problem. Forgetting to pay bills could become more frequent. Following a simple recipe could pose a challenge.

3.      Difficulty completing familiar tasks at home, at work or at leisure

For those with an early onset of Alzheimer’s disease, they will likely notice doing daily tasks they were once accustomed to has become a greater challenge, Yelland said. At home, this could mean having trouble running the dishwasher, or finding the correct button to turn on the microwave, oven or television.

Driving to and from work or other once-familiar places becomes difficult for those with the disease. At work, doing once routine tasks becomes burdensome. When writing a check, for example, they could forget what information goes on each line.

Yelland said that ultimately, these people might start to notice that “the normal” in their lives doesn’t seem normal to them anymore.

They might also confuse seasons of the year: going outside in the winter wearing shorts and a t-shirt, or wearing a parka during the summer. They might forget where they are and how they got there.

Experiencing vision problems is another sign of Alzheimer's disease, Yelland said. This could bring on difficulty in reading, judging distances, and determining color or contrast, all of which could lead to problems with driving.

6.     New problems with words in speaking or writing

Those with Alzheimer’s disease might have trouble conversing with others, lose their train of thought and repeat themselves, Yelland said. They often struggle with finding the right word or call things by the wrong name, such as referring to a watch as “hand clock” or “wrist clock.”

This aspect can be particularly tough on families, especially if the person suffering from Alzheimer’s can’t remember a loved one’s name.

“One of the biggest things I tell people is just be patient and don’t argue,” Yelland said. “So many times a person with Alzheimer’s may not remember something or someone, but don’t say, ‘Why don’t you remember that person?’ Stay calm, so they stay calm. Don’t get agitated.”

7.     Misplacing things and losing the ability to retrace steps

Yelland said most people know that when they lose something, such as a car key, they simply have to trace their steps to find it. This is not something people with Alzheimer’s disease can do easily.

They might lose an item and cannot think back to when they last saw it. They might put objects in unusual places or accuse other people of stealing something they cannot find.

People with Alzheimer's disease often experience changes in judgment or decision-making. For example, they might use poor judgment when dealing with money. They might forget to keep themselves clean or comb their hair.

9.      Withdrawal from work or social activities

“Oftentimes when all these frustrations and hard times are happening, people with Alzheimer’s disease do realize it,” Yelland said. “They know what’s happening to them, and it’s hard for them to deal with it.”

10.   Changes in mood and personality

People with Alzheimer’s disease or related dementia could experience a swing of emotions that range from confused, suspicious, depressed, fearful or anxious. Some days will likely be more pleasant than others for them. Certain times of the day might be better, too.

Yelland said there’s a sundowning phenomenon often associated with Alzheimer’s disease and dementia, meaning people are more cognitive and able to do things in the morning. By the evening, things become a bigger struggle.

“Even throughout the day you can have changes in your cognition,” she said.

For that reason, it might be in the best interest of family and friends to encourage balancing the checkbook at the beginning of the day, for example, or preparing the dinner meal early in the morning so at night it’s not as much of a struggle.

While there is no cure for Alzheimer’s disease, Yelland said about 90 percent of what is known now about the disease has been discovered in the last 15 years. While it’s a complicated disease, some of the risk factors that are backed by research include: age (most of the people who get it are over age 60); familial history, especially if a parent, brother or sister has the disease; and the presence of a rare gene called Familial Alzheimer’s Disease or FAD.

Early this year, Yelland will lead extension agents through trainings titled, “Know the 10 Signs of Alzheimer’s Disease: Early Detection Matters,” to help increase the knowledge base of extension professionals around Kansas and equip them with tools to assist an aging population in the state.