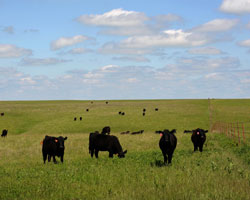 MANHATTAN, Kan. – In the midst of the spring calving season, beef producers could experience calf losses due to late-term abortions and stillbirths. Although it might seem that there is an increase in the number of calf abortions occurring, a certain number of them are a regular part of the calving season, according to Gregg Hanzlicek, director of production animal field investigations at the Kansas State University Veterinary Diagnostic Laboratory.

According to Hanzlicek, the most commonly diagnosed cause of late-term abortions in the samples submitted to the KSVDL was a vitamin A deficiency in the mother, which can occur as a result of multiple factors. Hay that was put up during a drought will contain less of the nutrient, and older hay and stored minerals will see their levels of vitamin A deplete over time.

A deficiency can also occur when a producer does not provide enough of the nutrient in relation to the dam’s needs through a trace mineral program or does not monitor his or her herd’s consumption to ensure nutrient requirements are being met, he said.

If a vitamin A deficiency is responsible for multiple abortions in a herd and is determined as the cause, extra supplementation could help alleviate the risk of having more stillborn calves.

“We can run those yet-to-calve cows and heifers through the chute and give them a vitamin A injection, and that will perhaps reduce the amount of abortions that may occur later in the calving season,” Hanzlicek said.

He recommends cow-calf operators test their forages for nutrient content and consult a nutritionist about proper nutrient supplementation. Although forages aren’t normally tested for vitamin content, many times forages are deficient in multiple nutrients, and only through testing can an appropriate diet be formulated. The complete nutritional balance of the dam prior to and at calving is one of the most important factors to assure a successful calving season.

Another common cause of late-term calf abortions, Hanzlicek said, is infectious bovine rhinotracheitis, or IBR, a highly contagious virus that can affect both the respiratory and reproductive systems in cattle. IBR can cause respiratory disease or various reproductive problems, including infertility, birth defects and abortion.

If IBR is determined to be the cause of an abortion storm, there is not much a producer can do during the current calving season. He or she should formulate a plan to avoid the problem next year.

“It’s important that if it is diagnosed in the herd – or even if it isn’t – that a producer sit down with a veterinarian to help design a vaccination program that is going to help protect that herd against IBR abortions,” Hanzlicek said.

Another virus, bovine viral diarrhea, can cause a calf to be aborted or have various anatomical defects depending on the stage of gestation the dam becomes infected. If BVD is determined to be the cause of an abortion, a situation similar to how IBR is handled is necessary – a producer can do little during the current calving season, but a vaccination program should be set up to prevent the issue in the future.

He recommends that producers test the herd to find carriers of BVD; without eliminating the carrier animals, any control program’s success is unlikely.

Some factors that cause late-term abortions are random and difficult to predict or prevent, Hanzlicek said. Sometimes a fetus will develop a congenital defect – an anatomical abnormality that occurs by chance – and the result is a calf that is stillborn or is aborted. In addition, various environmental bacteria can infect a fetus and cause a late-term abortion.

“Typically when we diagnose the environmental bacteria as the cause, they’re not abortion storms,” Hanzlicek said. “They’re one or two abortions in the herd. These are bacteria naturally found in the environment on all operations that the cow or heifer are exposed to, but for whatever reason that bacteria gets in the bloodstream, crosses the placenta and causes damage to the fetus.”

In some cases, sudden-death calf losses occur, which means a calf is born alive but is found dead within a few hours or days. According to Hanzlicek, in 2015, multiple cases submitted to the KSVDL were found with toxic levels of copper and/or selenium in calf’s liver.

“In all these cases, there was also a history of the producer injecting the calves with one injection or multiple injections of one of the commercially available injectable minerals,” Hanzlicek said.”

Although there was one case where a producer did not follow the labeled directions and administered too much of the product to the calves, he said that in several cases the dosage was reported to have been followed correctly.

The reason the toxicity occurred is still under investigation. It may have been an isolated response by the calf. It is also possible, he said, that the dams were on an adequate plane of mineral nutrition, and therefore the calf’s mineral status was sufficient. But, the injectable product “pushed” the status into a toxic situation.

Hanzlicek said he recommends that cattle producers consult a nutritionist or veterinarian to determine what supplementation is necessary in their herds.

“If (injectable minerals) are used, it’s important to follow labeled directions,” he said, “but it’s more important to ask, ‘Do we believe this action is going to benefit our calves and not harm them?’”

If one cow in a herd has a late-term abortion, Hanzlicek said the producer should consider consulting a veterinarian on whether collecting samples for diagnostic purposes is necessary.

“It’s unlikely that the veterinarian is going to say, ‘Let’s send some samples in,’ on the first or second calf to try to find the problem,” he said. “But, it does make sense for the veterinarian to guide the producer on saving the fetus and the placenta, or the tissues in case there are multiple abortions in the near future, because the probability of finding a diagnosis increases as more samples are submitted for a diagnostic workup during an abortion storm.”

He also said that the best sample, when possible, is the entire fetus and multiple sections of placenta, but if this is not possible, saving the appropriate tissues from each case is also valuable. All samples should be kept cold, but not frozen, if possible; some diagnostic value may be lost when working with a fully frozen sample.

K-State Research and Extension is a short name for the Kansas State University Agricultural Experiment Station and Cooperative Extension Service, a program designed to generate and distribute useful knowledge for the well being of Kansans. Supported by county, state, federal and private funds, the program has county Extension offices, experiment fields, area Extension offices and regional research centers statewide. Its headquarters is on the K-State campus, Manhattan.