Weevils are most active in temperatures between 45 and 80 degrees. 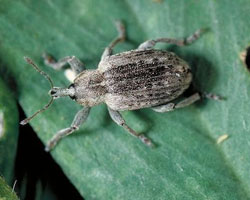 MANHATTAN, Kan. – The alfalfa weevil can wreak havoc on an alfalfa field, so it’s important for growers to know all current methods of controlling and preventing them. The weevils are incredibly durable and can survive low temperatures, said Jeff Whitworth, Kansas State University associate professor of entomology.

“The alfalfa weevil is a cool-weather insect, so that means it does best between 45 and 80 degrees Fahrenheit,” Whitworth said. “Once it gets too warm, it ceases activity, and once it gets below 45 degrees, it will cease activity.”

However, just because the temperature has dropped, doesn’t mean that the weevil is gone for good, he said. It has a knack for being able to survive in relatively extreme temperatures for a creature of its size. Adult weevils are only about three-sixteenths of an inch long.

“Anytime the temperature is less than 45 degrees, the (alfalfa weevils) crawl down into the leaf litter around the soil. They don’t really hibernate; they just become inactive,” Whitworth said. “When it warms back up, they start moving and start laying eggs.”

The survivability and determination of alfalfa weevils to lay eggs is what makes them a troublesome pest, Whitworth said. From October to March, the weevils lay eggs, which will hatch anytime the temperature is above 45 degrees.

“I’ve seen eggs hatch as early as late February and continue on through May, because some of those eggs that were laid in October and November developed enough that they started hatching in February,” he said.

The eggs can be difficult to find, as they are laid in the stem. This can make finding the right time to treat them also difficult.

“Whether (the stem is) horizontal or vertical, the alfalfa weevil will still lay the eggs inside that stem,” Whitworth said.

The biggest problem, Whitworth said, is finding the right time to treat them. Treating them before they can lay eggs might seem like a good option, but this method has proven difficult to time accurately. Because of their hardiness, alfalfa weevils tend to be out and active for a majority of the year.

“We have put out fall treatments, where we tried to kill the adults in the fall before they lay the eggs. The problem with that is timing,” Whitworth said. “The difficulty with these fall treatments is that insecticides aren’t very effective when the temperature drops below 45 degrees.”

Therefore, insecticide effectiveness can be an issue when temperatures fluctuate regularly. In addition, fall treatment tends to kill off beneficial insects that help control non-beneficial insects on an alfalfa field, he said.

The current inclination for alfalfa growers will be to treat the weevils at the first sign of damage in early spring. However, Whitworth recommends waiting until later when there are more weevils present.

“Those first few larvae will feed a little bit, but there’s more to come,” he said. “Wait until you have a 50 percent infestation, meaning 50 percent of the stems are infested with live larvae. That’s probably a good time to spray.”

Alfalfa growers can visit the K-State Research and Extension Bookstore online or their local extension office for more information on the alfalfa weevil,