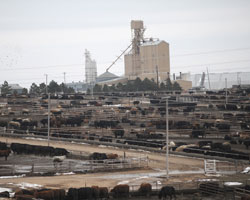 MANHATTAN, Kan. – Have you ever left for a conference feeling just fine, shook a lot of hands and mingled, then returned home to spend a day or two in bed with the cold or flu? The same thing can happen to livestock throughout the various phases of production as new groups of animals mix and germs spread.

It’s simply part of life – both humans and livestock get sick – and sometimes to get better they need to be treated with antibiotics, said Mike Apley, veterinarian and professor of production medicine and clinical pharmacology at Kansas State University’s College of Veterinary Medicine.

Since the announcement in 2012 that antibiotics used for promoting growth in livestock would be phased out, heated discussions and debates have come to light surrounding the use of antibiotics as a whole and the livestock industry’s role in antibiotic resistance.

“Guidance 209 was finalized in 2012, and what it said was two things,” Apley explained. “First, the FDA (U.S. Food and Drug Administration) does not feel that using medically important antibiotics for growth promotion is judicious or consistent with stewardship of the antibiotics, so that practice needs to stop. The pharmaceutical industry agreed to do that voluntarily by removing growth promotion indications from the labels of their products. And, since any extra label use in feed is illegal, this takes away that potential use.”

“Secondly, veterinary oversight over the use of medically important antibiotics in the feed or water of food animals was established, again by the voluntary inclusion of this requirement on the labels for these products.”

He said that a veterinary feed directive (VFD) ruling was put in place in hopes that by increasing the involvement of veterinarians, the professional judgment and training of the veterinarian would lead to increased antibiotic stewardship. These VFDs work similarly to prescriptions necessary to use other products in veterinary medicine. The final revised VFD ruling took effect Oct. 1, 2015, and the new labels for in-feed medically important antibiotics will be phased in December 2016.

To authorize feed antibiotic use through a VFD, the veterinarian will learn about the producer’s operation, assess the medical challenges and then prescribe antibiotics used in feed according to their medical judgment, Apley said. Medically important antibiotics used in water will require a prescription, just as a prescription is required for injectable products. In the case of antibiotics in the feed, the veterinarian’s only options for the dose, duration and indication are on the label.

There are many theories about how antibiotic-resistant bacteria can be spread from animals to humans, but Apley said the truth is scientists on both sides of the argument struggle to prove probability. Then enters the precautionary principle, which is a recognized regulatory approach commonly used in Europe.

“The precautionary principle says that if there’s enough information to cause me as a regulator to think that there’s a potential harm to human health, and that threat is big enough that if it gets snowballing and we can’t stop it there can be great harm, then I’m going to remove that threat until someone can prove to me that it’s not a threat,” he said. “The FDA will adamantly deny using the precautionary principle, but when you look at the data showing that growth promotion use can be separated from prevention, control or therapeutic uses as far as selection for resistance, well, there is none.”

Human versus animal use

He said the misconception we often see in mainstream media comes from the statement of facts about how many antibiotic-resistant cases are reported each year that seamlessly transition to talk about the use of antibiotics in animal agriculture. But, when he went through the tables and data provided, the statistics did not provide a strong link.

The Centers for Disease Control and Prevention reported that in 2013, an estimated 2,049,442 cases were linked to antibiotic-resistant bacteria that resulted in 23,488 deaths. When Apley studied the data, he said he found that out of 17 different antibiotic-resistant microorganisms listed in the report, only two had a defined connection to animal agriculture.

“There are some that could be linked to food animal production,” Apley said, “and that’s where the precautionary principle is used. But, consumers should know that we are serious about the health of our animals, and we’re serious about raising healthy food. When they hear about an outbreak or something that slipped through the cracks, think about this: numerators are easy, but denominators are hard.”

Apley means that while hearing about a single case of antibiotic resistance once every six months may be scary, think of how many millions and billions of meals were eaten in that time frame, and there was only one case.

“If there are illnesses or a loss of life, that is the last thing we want,” he said. “I’m not downplaying that. But, you look at the big picture, and one out of a billion is a pretty good record. We have an incredibly safe food supply, and we have the vast majority of producers who are committed to raising animals right.”

Apley said that perhaps the greater issue of antibiotic resistance doesn’t even pass the pasture gate. What if producers could be overusing their last line of defense?

The last new antibiotic group released and approved for human or animal use – and we now use a member of that group in food animals – was in 1978, he said. Everything since then has just undergone chemical modification. Those modifications may help for a short time, but eventually they lose their effectiveness.

“Bacteria are like opossums; they live stupid and have a lot of offspring,” Apley said. “It’s not that the bacteria outsmart us, but it’s that there are so many offspring with so many different mutations that the ones that can survive multiply, and we have a new, adapted population. So we create new versions of the same antibiotics that outrun them for a while, and then they genetically select to overcome them.”

He said that antibiotics can often be used as a management tool, and when that practice becomes routine, the price paid can be a loss in value of that antibiotic when it’s needed to actually treat an animal.

“For producers and veterinarians, antibiotic resistance isn’t just about whether we do or don’t affect human antibiotic resistance,” Apley said. “It’s about preserving these valuable tools for our use 10 to 20 years down the road. We have to be good stewards of them, and that means doing everything we possibly can to make sure we don’t have to use them.”

In some cases, antibiotics are required for disease control, but Apley encourages producers to work with their veterinarians and try other preventative measures such as vaccines, biosecurity, animal flow, environmental management, culling and diagnostic testing first to control disease and lower the use of antibiotics.