The fight against broadleaf weeds in winter wheat 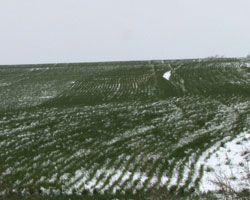 MANHATTAN, Kan. – Most of the wheat and weeds are inactive during cold weather; however, that can quickly change in the Midwest. While broadleaf weeds are dormant, wheat producers can get a jump-start on managing them in winter wheat.

“The weed and feed approach is a common practice,” said Curtis Thompson, Kansas State University professor of agronomy.“It is a sound practice, because we want to get nitrogen on early – well before the wheat has taken off and surely before jointing. Putting herbicide in with the nitrogen (fertilizer) can be extremely valuable.”

Thompson, a K-State Research and Extension weed management specialist, said it’s important to select a herbicide with residual activity, which means it has adequate persistence at the soil level following application. These herbicides will have an acetolactate synthase (ALS) inhibitor and could include the names Finesse, Rave, Amber, Glean, and Ally, as examples.

Producers in western Kansas may be dealing with the weed kochia in early spring. Thompson said these producers might want to also consider including herbicides that contain dicamba in the mix to help control it, or use Rave, which already includes dicamba. Additional herbicides having activity on kochia include Huskie and Starane although they have less residual effect than dicamba.

“As soon as we start to see any green coming in winter wheat, these winter annual weeds are also beginning to take off,” Thompson said. “That can be an excellent time to apply these herbicides.”

Thompson added that most of the ALS inhibitors will not cause leaf burn on wheat. Even when instances of chlorosis occur, the wheat will typically recover.

Chlorosis, which happens when leaves appear paler due to insufficient chlorophyll production, typically is in response to a combination of the herbicide application and cold weather, he said. The resulting chlorosis often is cosmetic.

“There are some ALS inhibitor products that have very little residual and should be tank mixed with a growth regulator, such as a dicamba,” he said. “When the wheat is fully tillered, we can use 2,4-D, and at that point we can get our broadleaf weeds controlled. We don’t have to worry about herbicide residuals carrying into the double crop.”

The herbicide label is the best reference for producers and should always be consulted, he said.

Thompson said there are restrictions regarding different herbicides. One chemical that is commonly mixed in is dicamba. Dicamba can be applied up to the jointing stage of wheat; 2,4-D has the potential to shut down tillering, thus the wheat must be fully tillered before using.

“Frozen soils, herbicides, fertilizer and precipitation do not go hand in hand,” Thompson added, as it increases the risk of contaminating surface runoff.

More information can be found in the “2016 Chemical Weed Control for Field Crops, Pastures, Rangeland, and Noncropland” from K-State Research and Extension. It is available online or at local extension offices in Kansas.