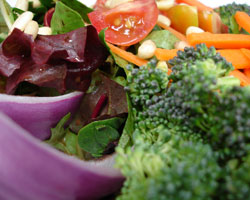 MANHATTAN, Kan. – A few abnormally warm winter days might have gardeners thinking ahead for next spring’s planting. Planning now isn’t premature, however, because most cool-season crops should be started from seed in early February.

According to Kansas State University horticulture specialist and Master Gardener coordinator Ward Upham, gardeners who start vegetable plants indoors should list the seeding dates on a calendar so plants are ready to transplant to the garden at the proper time. To do this, select a transplant date for a particular fruit or vegetable, and count back the number of weeks necessary to grow it.

If gardeners are interested in starting onions from seed, they should do that immediately.

“Onions are one of the first plants to be seeded for transplanting, because they take a significant amount of time, six to eight weeks, to reach transplant size,” Upham said. “They can be set out relatively early – late March in much of eastern and central Kansas.”

Broccoli, cauliflower, cabbage and lettuce are typically transplanted in Kansas in late March or early April, Upham said. It takes eight weeks to get from seeding to transplant size, so for an April 2 transplant date, those vegetables should be seeded on Feb. 6, for example.

Other popular crops grown in Kansas include peppers and tomatoes. Those are not transplanted until early to mid-May, he said; therefore, they would need to be seeded in mid- to late March.

Upham recommends buying seed from a reputable source, including garden centers and seed catalogs. Check the package date to make sure it was packaged for the current year.

“Though most seed remains viable for about three years, germination decreases as seed ages,” he said, noting some exceptions. Seed from members of the carrot family, which includes parsnips and parsley, are usually only good for less than two years.

For those who are unsure of viability of their seed and have plenty on hand, Upham said there is an easy method to test it:

Upham said gardening soil should not be used to germinate seed indoors. It is typically too heavy and may contain disease organisms. Use a media specifically formulated for seed germination.

Seed starting mixes usually contain a mixture of peat moss and shredded pine, among other ingredients that are lightweight, hold a lot of water and oxygen, and are sterile.

Dennis Patton, horticulture agent for Johnson County in Olathe, Kansas, said a downside to seed starting mixes is they usually don’t contain many nutrients. He recommends that at least once a week gardeners incorporate a water-soluble fertilizer when watering their seeds and starter plants.

Keep the soil moist, as this allows for germination. Using clear plastic wrap over the top of the containers can reduce the amount of watering needed. The plastic can be removed once seeds begin to germinate.

“Then once they’re up and growing you may want them to dry out slightly between watering,” Patton said. “Water saturation can lead to rot issues.”

“Another tip is don’t water if you’re going to turn the lights off,” he added. “If you water, that plant will push a little bit of growth. Water and fertilize going into a light to keep that transplant sturdy.”

Most plants will germinate in either darkness or light, but be sure to allow for light once emergence occurs; lighting the plants well is a major key to growing success, Patton said.

“I think when people have grown transplants indoors and have not had success, they may have been relying on the old, ‘put it in the south windowsill’ method,” he said. “But, there’s not enough light intensity for a long period of time to grow a great transplant that way. Most gardeners who are growing their own starts are using ordinary shop lights that are available from any home supply or hardware store.”

How close that light is from the top of the growing plant and how long the light is left on also determines starter plant success, Patton said. The rule-of-thumb is the light should be about 2 inches, and no more than 4 inches, from the top of the plant. Gardeners may need chains or another method to raise or lower the height of the light as the plants grow.

Leave the light on at least 14 to 16 hours per day, Patton added. This will give gardeners that nice, short, stocky plant that is desired to transplant outdoors.

Another item to consider is that while germination often requires warmer temperatures than found in most homes, plants can be grown at cooler temperatures of 65 to 70 degrees Fahrenheit during the day and 55 to 60 F at night, Upham said. A heating mat may be required to assist with germination, or put the container closer to the celling or on top of the refrigerator for more heat.

To help the plants transition well in the garden once transplanted, growers should brush over the plants with their hands daily to help them become stockier, Upham said. About two weeks before transplanting, the plants will need to be “hardened off.”

“Plants grown inside will often undergo transplant shock if not hardened off,” Upham said. “Plants are hardened off by moving them outside and exposing them to sun before transplanting occurs. Increase the number of hours and degree of exposure over the two-week period.”

More information is available online at Horticulture, Forestry and Recreation Resources, or at local extension offices across Kansas.