The focus is cost-effective streambank stabilization. 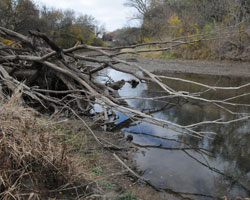 SALINA, Kan. – When farmers and ranchers proclaim, “I’d like to leave my land in better shape than when I acquired it,” most are simultaneously thinking about the next generation. They would like their children, grandchildren and future descendants to enjoy the same successes that they have witnessed.

Being a good steward of the land means thinking of and applying innovative means to improve land and water quality. It means growing crops and livestock efficiently while taking care of the natural resources that make food production possible, said Brad Shogren, a farmer from McPherson County, Kansas.

Through his involvement with a local conservation district, Shogren has worked with other farmers and stakeholders to develop more cost-effective ways to stabilize streambanks along tributaries of the Smoky Hill River. When streambanks collapse, sediment drifts into the water. Without prevention measures, the sediment can disrupt water flow and quality.

While the process of reshaping streambanks and placing rocks along the banks to prevent erosion has served as the traditional method of stabilization, this method is extremely expensive, said Ron Graber, watershed specialist for K-State Research and Extension. Especially in central Kansas, where Graber works, rock would need to be hauled to the site, which creates an added expense.

Graber said using on-site material such as trees as opposed to the traditional method has proven to be more cost effective. After extracting a suitable tree near the streambank, a dozer is used to trench into the bank to create a new home for the tree.

“We trench in and bury the root wad of the tree back into the bank,” Graber said. “We try to go in at least 10 foot. If we can go in 20 to 25 foot, that’s even better. We have the branches pointed out into the water with the stream. The idea is that they point downstream or with the flow.”

Because the tree is angled with the flow, it helps trap and settle sediment while making the streambank sturdier, he said. The process has thus far proven successful for many landowners.

“We’re excited about the possibilities of these projects and hoping they will continue to work well,” Graber said. “Initial evaluations (from demonstration sites) are indicating that.”

Cost savings for landowners is one of the most visible benefits. Graber said construction costs alone for the traditional “reshaping and rock” method are typically at a minimum $70 a linear foot, but more realistically as much as $90 to $100 a linear foot.

“If we’re talking about a site that is 800 linear foot long, you can see that we get a lot of money tied up into construction,” Graber said, “and then we’ve not paid the engineering costs.”

That example would mean up to $80,000 in construction costs alone.

He said the tree method could be done for about $1,000 per tree structure. That same 800-foot site might need eight tree structures, or one placed in the streambank about every 100 feet. That total cost of construction would be close to $8,000.

“This is a lot more palatable for a landowner to try to fix themselves without any cost-share (assistance),” Graber said.

In addition to providing lower costs, using on-site trees to stabilize streambanks is also improving water quality. According to a North Carolina Cooperative Extension report, sedimentation of surface waters clogs stream channels, which can lead to further erosion and flooding. It reduces the storage capacity of reservoirs, destroys wetland areas, and degrades water quality for municipal, industrial and recreational means.

Graber said local stakeholders in McPherson and Saline counties, along the Smoky Hill River, listed more than 100 sites that needed stabilization assistance. So far, they have assessed 80 of those sites by measuring bank heights and estimating erosion rates.

“In that process of identifying sites and trying to assess those, we ranked all of them 1 to 80,” Graber said, with No. 1 in the worst condition. “We know some sites are much worse depending on how tight the bend or the curve is, and how long it is. Just by doing those estimates of erosion, some of them are eroding less than a foot per year. Some of them are more in the 4 or 5 feet per year.”

Because using trees is a newer technique, Graber said local stakeholders didn’t want to pick out the worst sites to fix initially. They wanted to try to fix those that contributed some sediment into the river system before “jumping in head first on a really bad one.”

“We go to some of those landowners, talk to them about this process, see where their interest level is and go from there,” Graber said. “We have several completed and several more lined up who are interested.”

Shogren said many landowners are also interested in cost-effective streambank stabilization because of the benefits to wildlife. By restoring the streambank, more vegetation can grow.

“Some wildlife enthusiasts just love when we put in one of these sites,” Shogren said. “They go fish. We’re making habitat that is also suitable for deer, turkey and other wildlife that need those forages to survive.”

The landowners themselves must witness the many benefits before buying into the process, Shogren said. It’s an ongoing process that requires learning and improving.

“Over the years, we’ve had to learn,” Shogren said. “There have been a couple failures. We’ve had to go back and redesign. We have moved to also using recycled concrete – local resources from our cities and highways – so if someone is doing a project, we can gather those materials, truck them to a site inexpensively and use them later.”

“When you do one successful project in one area, the next guy downstream sees what has happened and wants to do it,” he added. “If we could get a third of the sites done over the next 10 years, I think it would be pretty significant, and it would definitely have an impact on the amount of the sediment load we have in the river.”

Shogren said he is optimistic, because the landowners he has talked to have a true interest in improving their land.

“As we stabilize these banks and look at these newer inexpensive ways of doing it, the old theory that ‘the coffee shop is the best place to promote your ideas’ works,” Graber said. “If we have a landowner who is happy with what’s happened, the cost is minimal and they’re excited, they’re going to tell their neighbors. We’ve already seen where some of the idea sharing is going on.”

K-State Research and Extension and the Kansas Center for Agricultural Resources and the Environment (KCARE) at Kansas State University has partnered on this water quality project with landowners, local Watershed Restoration and Protection Strategy (WRAPS) groups, local conservation districts, municipal stakeholders such as those from the City of Salina, the U.S. Army Corps of Engineers, Kansas Department of Health and Environment, Kansas Department of Agriculture’s Division of Water Resources, and other public and private agencies.

A video about the cost-effective streambank stabilization project in Kansas is available on the K-State Research and Extension YouTube channel.