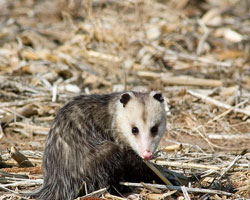 (Photo is courtesy of the Kansas Department of Wildlife, Parks and Tourism.)

MANHATTAN, Kan. – Opossums, or “possums” as they are often called, are commonly considered a nuisance. They are frequently called “ugly creatures” that rummage through garbage, terrorize other small animals, and play dead when threatened or harmed. However, research suggests these marsupials may be beneficial to the wildlife ecosystem in a variety of ways.

“Kansas has a large number of Virginia opossums,” said Charlie Lee, wildlife management specialist for Kansas State University and K-State Research and Extension. “They have a wide range throughout Central and North America, and their range continues to expand.”

He said opossums are found all the way from Costa Rica to the southern part of Ontario, Canada. They are typically found east of the Rocky Mountains and along the West Coast. They are limited in northward and westward expansion by temperature and snow depth, though, as they are not well equipped for the cold and snow.

The breeding season for opossums in Kansas begins in early February, Lee said. The mothers will wean their first litter of the year in May and will mate again for another weaned litter around September.

Opossums are marsupials, and like kangaroos, they carry their young in a small pouch until they grow and develop. They are the only naturally occurring marsupials found in North America.

Many people believe opossums are unpleasant to the eye.

“People think they look too much like a dirty, scavenging rat, rather than an interesting creature of Kansas,” he said. “They certainly have unique characteristics that should get people thinking of them in a positive manner.”

Many may also believe that opossums are not intelligent; however, research has shown that they are generally smart despite their small brain size. According to a University of Missouri publication, opossums scored better than rats, rabbits, cats and dogs on their ability to remember, but they did not score better than humans. Opossums also tend to outcompete other creatures for food.

They will kill a cockroach or even a mouse found in their territory, although they are generally not aggressive toward humans, Lee said. In fact, their common defenses are either fleeing or playing dead when pursued by a human.

Opossums are commonly thought of as the sanitation workers of the ecosystem, he added. They eat carcasses, rodents, insects, snails, slugs and beetles.

“One unique fact about opossums is that they’re a magnet for getting rid of blacklegged ticks (otherwise known as deer ticks),” Lee said.

He referred to a study by the Cary Institute of Ecosystem Studies that examined tick feeding on mammals. Those tested included different species such as white-footed mice, chipmunks, squirrels and opossums, among others.

“On opossums, only 3 percent of the ticks that were introduced were able to feed,” Lee said. “If you examine the normal tick load of opossums in the wild, which is around 200 ticks, and they’re consuming more than 95 percent of those ticks as part of their grooming process, they are responsible for removing about 5,500 ticks per year per opossum.”

For the most part, opossums are immune to rabies although a few cases have existed, he said. On average, a feral dog is eight times more likely to carry rabies than an opossum. Opossums are also resistant to some poisonous snakes including rattlesnakes, cottonmouths and pit vipers.

Lee said despite the benefits of opossums, they are known to carry a variety of bacterial and viral diseases. They can carry the dangerous equine protozoal myeloencephalitis, or EPM, which mostly affects horses when they ingest feed or water contaminated with opossum feces. The disease in horses can be prevented or reduced by proper sanitation and biosecurity.

Problem opossums – such as those found by a landowner in buildings or destroying property – can be controlled without a permit, he said. They are classified as fur-bearers, and they can be taken by hunting or trapping during regular season.

More about the opossum can be found on the Kansas Department of Wildlife, Parks and Tourism website.