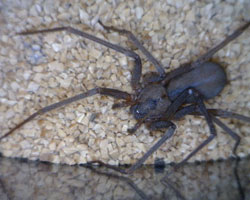 MANHATTAN, Kan. – They have a bad reputation for their venom, but brown recluse spiders truly are shy and would rather escape an encounter with a human than bite, according to Kansas State University research entomologists who have been studying the creatures for the past five years.

In fact, research associate Holly Schwarting and graduate student JR Ewing, both in Kansas State’s Department of Entomology, have hand collected more than 600 brown recluse spiders from homes and other buildings. They said none were aggressive or tried to bite, but the spiders did, however, try to escape.

“Their first, middle and last inclination is to escape,” said Kansas State University associate professor Jeff Whitworth. “They are quick and can run rapidly for short distances.”

March is when homeowners typically start seeing the brown recluse, which sometimes can be identified by the violin or “fiddle” shape on its back.

“Brown recluse spiders typically are dormant from October into March,” said Whitworth, who is an entomologist with K-State Research and Extension. “That is when their food source – generally insects and other spiders – is also less available, even in controlled indoor environments, such as our homes.”

The spiders can be found outdoors, as well as indoors, throughout most of Kansas, although have not been confirmed from natural habitats in the northwest corner of the state, he said.

“They are so commonly observed in dwellings,” Whitworth noted, “that most folks don’t even realize they occur in nature.”

On average, the spiders produce about 50 eggs annually, which hatch in the spring or summer and reach maturity the following year. They are reclusive from the beginning. Though they can be cannibalistic, they don’t seem to be overly aggressive to each other, he said.

“In fact they really do not seem to be aggressive, period,” he added.

“Brown recluse spiders are common,” Whitworth said. “You don’t have to like them, but you might as well get used to the idea that they are and will continue to be living with us for a long time.”

More information about spiders and insects in Kansas is available at K-State’s entomology extension website.