Information to help control and manage this invasive grass 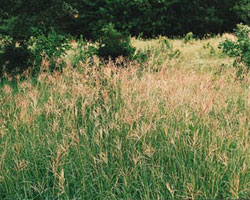 Photo is courtesy of The Noble Foundation

HAYS, Kan. – Old world bluestem is a plant that is becoming increasingly prevalent in native grasslands commonly used for cattle grazing, particularly in drier regions. The grass that was brought to the United States as a soil-stabilizing plant has come under fire due to how it affects the surrounding ecosystem.

Because old world bluestem can become invasive and reduce the growth and vigor of other grasses that are more nutritious and palatable for livestock, the plant can negatively affect plant biodiversity, insects and wildlife.

“In western Kansas, old world bluestem will begin to grow later than native grasses; they are not as cold tolerant,” he said.

The plant is easily distinguishable, because its color is typically pale with a yellowish-green tint. The seed heads can be seen from a distance due to their pinkish or purplish tint. These grasses grow quicker than native grasses and also produce a seed head quicker, Harmoney said.

There are two types of old world bluestem, yellow and Caucasian. They are similar in their effects on pastures and how they grow. Where the two types differ is in their appearance. This is visible by examining the seed heads.

“Caucasian old world bluestem has a more branched seed head, with branches throughout,” he said. The silhouette of the seed head resembles an evergreen tree, with the branches of seeds getting shorter toward the top.

Harmoney noted that it is an extremely persistent plant that does well under dry and arid conditions. Old world bluestem has actually performed better than some native grasses under arid conditions.

These plants also are prolific seed producers. They have seed banks beneath them that can result in plants years after herbicide control treatment.

While old world bluestem is notoriously hard to treat, there are a few methods to control it.

“Some of the most successful treatments to control old world bluestem are with either glyphosate treatments at different rates and times or with imazapyr, another herbicide,” Harmoney said.

Another way to manage old world bluestem using glyphosate is by doing a one-time application of 2-3 pounds per acre once the plant begins early heading.

Imazapyr can be used in a similar way, Harmoney said. Apply a quarter-pound to a half-pound per acre early when the plant has four to five leaves. Repeat eight weeks later using a quarter-pound application.

“If you already have old world bluestem, I would recommend to manage the area as its own field,” Harmoney said, “especially if you have an area that you are able to segregate from other pastures.”

The plant is not toxic to livestock, so it can be grazed, even though it is not the most nutritious forage when mature, compared to other grasses, he said. By segregating an area of old world bluestem from non-infected areas, landowners can use different pasture-management techniques such as burning, mowing and intensive grazing. This leads to the plant having new leaf growth to aide in herbicide treatment at a later time.

Removing old world bluestem can allow other plants and seedlings to grow in the ecosystem, Harmoney said. However, because old world bluestem often has a seed bank underneath, there is a possibility that the plant will reemerge from seed two to three years after being treated. This means there is a need to reapply herbicide over time to control possible new seed growth.

“To mitigate the likelihood of getting old world bluestem, if reseeding an area to grass, you should ensure the seed company you use is a dealer that keeps track of the plant,” Harmoney said. It is important that companies are free of these old world bluestem seeds in their production systems; seed contamination is a form of spreading the grass when reseeding the ground.

Hay from some states have a higher likelihood of having old world bluestem as well. Southern states such as Texas and Oklahoma are more likely to have traces of the plant.

More information about Harmoney’s research on old world bluestem, among other research projects, is available online.