As children wrap up another year of school, a K-State specialist shares tips on how to get them physically active over the summer, which is necessary for their full development. 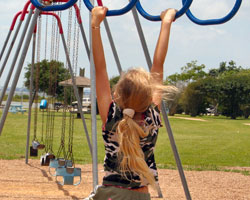 MANHATTAN, Kan. – With all of the technology used for entertainment in today’s society, it can prove troublesome getting your child up from the couch and out onto the playground. But the trouble is worth it. Studies continually show physically active children outshine their peers in the classroom.

The classroom is just the beginning of the benefits of a physically active child, according to Bradford Wiles, assistant professor in Kansas State University’s School of Family Studies and Human Services, who said physical activity helps build connections between the body and brain.

“Kids who are physically active are much better at getting along with peers and adults,” Wiles said. “They also do better on standardized tests; the impact of physical activity cannot be underestimated.”

Wiles, an early child development specialist for K-State Research and Extension, said that in fact, physical activity could positively affect both the cognitive and emotional development of children.

“Physical activity as a pursuit doesn’t necessarily need to be in a team environment, but it often is,” Wiles said. “So they’re learning cognitive development skills, how to work with one another, and how to handle winning and losing.”

It’s important to realize that the cognitive and emotional development children experience by participating in physical activity can’t happen if they are playing alone, he added. Being involved as a parent is essential for developing a well-rounded child.

“Physical activity with an adult, preferably a parent, is so much more beneficial not only for the child but for the parent as well,” Wiles said. “We have an obesity issue with young children and adults. It doesn’t matter what you choose to do to be physically active; what matters is that you’re doing it consistently.”

Consistently kicking the soccer ball around or playing catch will not only improve the physical abilities of both the parent and the child, but this also works to improve the relationship between the two, he said. Being flexible and open to opportunities to new and unique kinds of physical activity is also important. There are multiple ways to perform any type of activity, and adults need to remember to be patient.

“While we may think the right way to play soccer is to kick the ball back and forth to one another, if a child decides they want to kick the ball all around the yard and then finally kick it to you, that’s ok,” Wiles said.

At times, it can be a struggle to get children physically active. One of the best ways to get a child out and about is to model it, the specialist advises. If a child sees his or her parent being physically active, that child is much more likely to follow suit.

What is not advisable, said Wiles, is using video games as a reward for being physically active.

“You’re teaching them that being sedentary is a reward,” he said, adding that a better approach would be to make being active just part of their everyday schedule.

Kids should be moving, no matter how young they are. For kids younger than age 3, Wiles advises that they should be active for half of the time that they’re awake. Whether that be crawling or walking – whatever they are capable of – it’s important for their cognitive development that they be active early in life.

“There’s a time to sit and relax, but that time is not early or middle childhood,” Wiles said. “That’s where we grow; play and physical activity are the work of early childhood.”

“As kids get into elementary school, the recommendation is physical activity for an hour a day,” he continued. “I would echo that. I think even more importantly, physical activity with an adult is much more beneficial.”

Physical activity is even beneficial in keeping consistent sleeping schedules. Wiles said kids are much more ready for bed, when it’s bedtime, if they’ve been outside playing.

Wiles recommends looking toward the Centers for Disease Control and Prevention, the National Association for the Education of Young Children, the U.S. Department of Agriculture and your local extension office for more information on the benefits of physical activity for children.