Research indicates that combined losses in corn and soybeans alone would total $43 billion annually in the U.S. and Canada 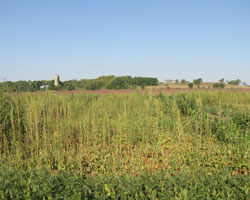 MANHATTAN, Kan. – Imagine that weeds were left to grow uncontrolled in corn and soybean fields across North America. That scenario would cut U.S. and Canadian yields by about 50 percent, resulting in $43 billion in annual economic losses to those two crops alone, according to a new study.

The research, conducted by the Weed Science Society of America and led by Kansas State University professor Anita Dille, spanned seven years from 2007 to 2013. Details about the study are available at Crop Loss.

“We were interested in trying to understand just how much impact weeds still have on our crops. Despite the great improvements we have in crop genetics and fertility, we’re still having to manage weeds,” Dille said, noting that weeds compete with crops for everything from sunlight to moisture to nutrients in the soil.

The WSSA is a professional organization of scientists from universities, industry and government agencies across the United States and Canada who are interested in weed science. Dille chairs the WSSA’s weed loss committee.

“What we saw in corn is that we’d lose over half of our yield if we didn’t manage those weeds – a 52 percent yield loss,” Dille said. “And in soybeans, almost the same – 49.5 percent total yield loss on average.

The United States leads the world in both soybean and corn production, while Canada ranks 7th and 11th, respectively, according to the United Nations Food and Agriculture Organization.

“We wanted to document that weeds were still a significant pest to manage, that we need to maintain all the different weed control practices that we have. There’s a lot of pressure on the industry to say, ‘hey, stop doing this or that.’ We wanted to highlight that these weeds are still so important and that we need to come up with every option that we can to manage them.”

A recent dramatic reduction in research funding for weed management in crops is a trend she and other scientists find disturbing.

Weed scientists conduct a number of weed control studies each year, Dille said, so the WSSA team asked them to provide the yield data from corn and soybean trials, specifically the untreated plot yield, and yield from plots with their best weed control methods. The team looked at the yields from both and took the difference to calculate how much yield loss happened.

“So, the idea,” she said, “was they did everything right to produce their best crop – their best seed, they fertilized it, they irrigated it – whatever they needed to do, but they just didn’t control the weeds in the untreated plots, so we could see what kind of yield loss impact that would have.”

In comprising the WSSA report, the scientists used data from these trials, plus the U.S. Department of Agriculture’s National Agricultural Statistics Service and Statistics Canada on how many acres were harvested of those crops and the value of the crops over the years studied to determine the total potential impact of weeds on the crops.

Dille recommends crop producers identify exactly what weed species are a problem on their farm, and to use more than one strategy to control them.

“Weeds are smart. They keep figuring out how to survive whatever we throw at them,” Dille said, including altering their genetic makeup to tolerate some herbicides. “The reason some people ended up with herbicide-resistant weeds is that they often used a really good product over and over again and the weeds weren’t exposed to other control practices. If we change it up, keep the weeds on the defensive, then they potentially won’t become resistant because we’ve controlled those resistant ones with a different technique.”

Know what your weed species is, she advises. When does it come up? How fast does it grow? How long does it compete with the crop?

“Once we know about their biology, then we can design and pick the best practices to go after the plants before they’re a problem,” she said, adding that many resources are available to help producers identify weeds, including online fact sheets and publications with photos. “County extension agents and university faculty and extension specialists are ready and willing to look at pictures or specimens to determine what plant a grower has.”

A video of an interview with Dille is available.

According to a Weed Science Society of America study, Kansas alone would potentially have lost 52.6 percent of soybeans at an average financial cost of $666,435,000 per year over the seven years of the study (2007-2013) if weeds had been left to grow unchecked.

The study indicated a potential yield loss of 46.3 percent of dryland corn per year at a value of just over $500 million without any sort of weed management.

More information about the study, including data for other states is available at Crop Loss.