1 in every 10 adults in Kansas has been diagnosed with the disease that can lead to stroke, blindness and kidney failure. 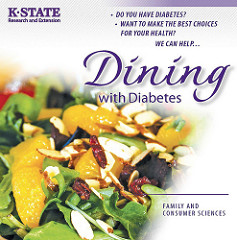 MANHATTAN, Kan. – Imagine a gathering with 10 of your friends and family members. Now imagine that at least one of you has a disease that can lead to blindness…or amputation...or a stroke. The prospect is not at all far-fetched.

About one in 10 Kansans has been diagnosed with diabetes, a chronic disease characterized by elevated blood sugar (blood glucose). High levels of blood glucose are a result of inadequate production of insulin or a resistance to the effects of insulin, a hormone produced by the pancreas.

K-State Research and Extension is offering Dining with Diabetes, a national extension program designed to boost the health and wellness of Kansans with Type 2 diabetes and help educate their family members, caregivers and others who support them.

The prevalence of diabetes is greater in African-Americans, Hispanic Americans, among older adults and those with a family history of Type 2 diabetes, Price said. Some risk factors, however, can be modified, including being overweight or obese, physical inactivity, high blood pressure, high blood cholesterol and smoking.

An estimated $245 billion was spent on diagnosed diabetes in 2012 in the United States alone according to a study by the American Diabetes Association, Price said, including direct medical expenses and lost productivity. That was up from $43 billion in 2007. The study also indicated that people with diabetes spend an average of 2.3 times the amount of money on their health every year that people without diabetes spend. That works out to an average of $13,700 a year per person, about $7,900 of which is directly attributed to diabetes.

Dining with Diabetes is a series of two-hour classes held once a week for four weeks. Lessons focus on the best ways to take care of yourself if you have the disease; healthful food choices including familiar foods; low-impact physical activity; food sampling; cooking techniques using herbs, spices, reduced-fat foods and artificial sweeteners.

For more information or to find if a class is being held in your county, check http://www.k-state.edu/diningwithdiabetes/ or contact Price at 620-820-6123 or gprice@ksu.edu.

Diabetes by the numbers in Kansas

MANHATTAN, Kan. – Diabetes is a chronic disease characterized by elevated blood sugar (blood glucose). High levels of blood glucose result from inadequate production of insulin or a resistance to the effects of insulin, a hormone produced by the pancreas.

According to the Kansas Department of Health and Environment:

More information is available at http://www.kdheks.gov/diabetes/download/Kansas_Diabetes_Facts.pdf

-       Source: Kansas Department of Health and Environment Fact Sheet May 2016