After the ice storm: Tending to damaged trees 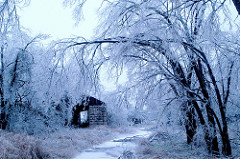 MANHATTAN, Kan. – After the ice storm that struck Kansas last weekend, many people – especially in the middle of the state – are dealing with damaged trees. Ward Upham, extension associate for Kansas State University, said tree damage often leaves homeowners with a decision about whether a tree can be saved.

For those facing that choice, as well as cleaning up plenty of fallen limbs, the first step is to wait until all the ice has melted.

“Slippery ice and chainsaws don’t mix,” said Upham, home horticulture rapid response coordinator for extension agents across Kansas and the state extension Master Gardener coordinator. “Check for downed power lines or hanging branches. Don't venture under the tree until it is safe. If large limbs are hanging precariously, a certified arborist has the tools, training and knowledge to do the work safely.”

The next step is to remove debris to avoid tripping over it.

After that, a careful examination of the tree is necessary to decide if saving the tree is feasible. Upham provided this checklist of steps to make that decision and give surviving trees the best chance to thrive:

Upham also noted that pruning can be dangerous. “Consider hiring a trained, certified arborist to do major work,” he said. “Also, a good arborist knows how to prune trees so that storm breakage is less likely to occur. Preventing damage is better than trying to fix it once it has happened.”

For more information about tree care and more, subscribe to the K-State Research and Extension Horticulture Newsletter: www.ksuhortnewsletter.org. An audio interview with Ward Upham speaking on the radio show Agriculture Today is available at http://www.ksre.k-state.edu/news/radio-network/agtoday-mp3/011917-upham.mp3