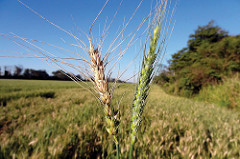 WASHINGTON, D.C. — Kansas State University is one of 11 research universities that have joined an effort to ask for stronger federal support of the agricultural and food sciences.

Plant pathologist Barbara Valent was in Washington, D.C., today as part of the project organized by the Supporters for Agricultural Research (SoAR) Foundation, which hopes to encourage stronger funding of agricultural and food science in the 2018 Farm Bill.

Scientists at the 11 universities are currently involved in solving some of the thorniest questions in food production despite the federal government’s limited research budget for the U.S. Department of Agriculture.

All of the projects are funded currently by the USDA National Institute of Food and Agriculture through the Agriculture and Food Research Initiative (AFRI), which was established in the 2008 Farm Bill. The universities involved include Cornell, Iowa State, Kansas State, Michigan State, Nebraska, North Carolina State, Ohio State, Penn State, Texas A&M, the University of California-Davis and Virginia Tech.

Their work covers many topics, including a new process to remove allergens from peanuts; Bovine Respiratory Disease; diseases and pests that affect such crops as rice, wheat, soybeans and other row crops; and more.

Valent leads a team that includes more than half a dozen researchers from Kansas State University plus scientists from six other universities, the U.S. government and agricultural agencies in Bolivia, Brazil and Paraguay.

Valent said the researchers have developed new insight on management of rice blast disease, which is already a problem in the U.S.  The devastating wheat blast fungus only occurs in South America and, most recently, in Bangladesh, and the team has developed the tools to quickly detect and try to defeat the fungus if it appears on wheat in the U.S.

“We are working on basic understanding of how this fungus affects plants and searching for new sources of resistance,” Valent said. “We’ve succeeded in finding the first resistance gene — called 2NS — for wheat blast. Breeders have been using a piece of a chromosome from wild wheat that has provided rust resistance and nematode resistance. Our good luck was to find that it also provides some resistance to wheat blast.”

But the fungus is a constantly moving target, she said.

“We’ve expanded our capacity and developed good collaboration for field tests in South America,” Valent said. “(Farmers in South America) want to know about resistance, they need resistance. They are going to use the things we are finding. Ultimately, the best way to keep this disease from spreading is to control it in South America.”

Funding for that project ends late this year, however, and with funds for agricultural research becoming more scarce, it leaves an important research project in peril.

“We are trying hard to secure funding for 2018 and beyond, so that we can keep our productive, multidisciplinary team together and not lose momentum on solving the critical problems,” Valent said.

When AFRI was first established, the Farm Bill authorized $700 million for food and agricultural science. But Thomas Grumbly, president of SoAR, noted that the project currently receives only half of that money, despite a growing demand to feed more people on less land.

“USDA’s AFRI program, the agency’s premier source of competitively awarded grants, generates the science that keeps our farms healthy,” he said. “But farmers need a flood of research breakthroughs, and AFRI’s limited budget only allows for a trickle.”

Each of the 11 research universities calling for more funding is featured in the report, Retaking the Field — Strengthening the Science of Farm and Food Production, which was published March 2 by SoAR and is available online at www.supportagresearch.org/retakingthefield.

Here is a list of the 11 universities that have joined forces to support increased funding of the agricultural and food sciences, along with key projects each is involved in:

Cornell University — Cross-referencing genetic details with climate and harvest data over the past 40 years for every rice-growing region in the U.S. to help plant breeders develop new weather-specific varieties

Kansas State University — Examining the blast fungus, which has long afflicted rice crops and now infects wheat fields, to determine new ways that plants can resist the pathogen and overcome its ability to evolve

North Carolina Agricultural and Technical State University — Devising a process that removes 98 percent of the major allergens in roasted peanuts using a naturally occurring enzyme, and then engineering the process to treat raw peanuts as well

Ohio State University — Examining and cataloguing the microbiome in a chicken’s respiratory tract, the first step in developing management systems that can lower the level of pathogens hurting production

Pennsylvania State University — Analyzing how the saliva of caterpillars and other insect excretions trigger the defenses of crop plants, providing a new path for plant breeders to explore as they develop more resistant cultivars

University of Nebraska, Lincoln — Flagging genetic markers in sows associated with the earlier onset of puberty, allowing the pigs to produce more litters in their lifetime and increasing production efficiency

University of California, Davis — Mapping out more than 90,000 genetic markers in wheat plants and identifying the markers that are linked to further increases in productivity and resistance to dangerous pathogens