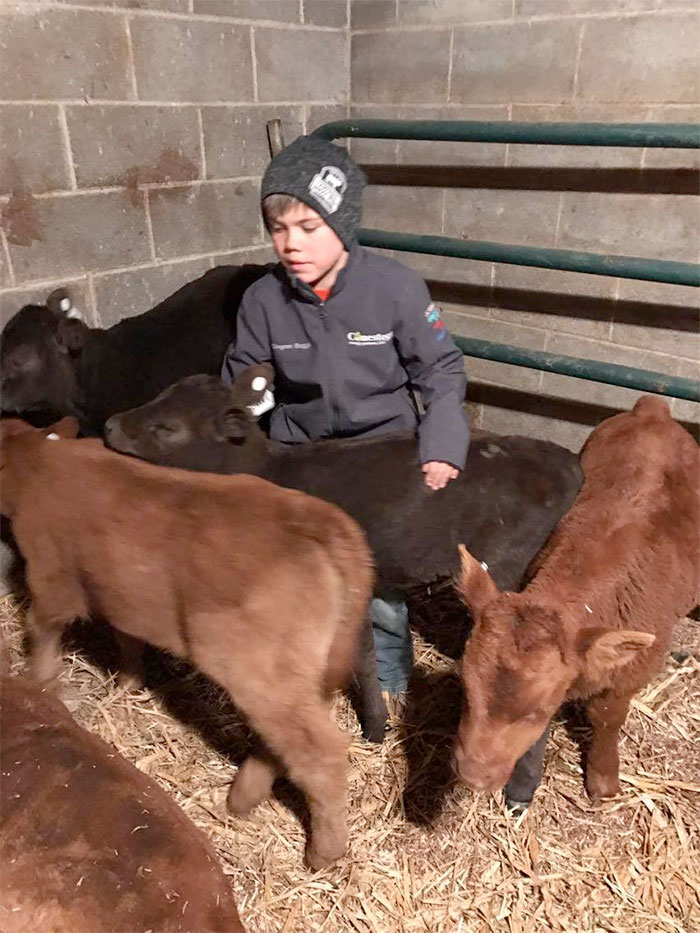 MEADE, Kan. – A Kansas 4-H Club has rallied supporters in the state and surrounding states to take in orphaned calves whose mothers were victims of the wildfires that raced across several western counties last week.

Rachelle Schlochtermeier, one of the parent leaders of the Four Leaf Clover Club in Meade County, said the response to the club’s idea to “do something” for families affected by the fires has been overwhelming.

“We have been hearing from people all over the state of Kansas, even people from Michigan and Missouri and Oklahoma,” she said. “People want to make a donation or find out how they can help.”

Schlochtermeier and another parent, Erin Boggs, helped their 4-H Club get organized, and have seen clubs in Elkhart, Ness City and Russell join the effort to rescue orphaned calves and place them in good homes. More groups are joining in all the time, Schlochtermeier said.

The volunteers are spending their own time and money traveling to pick up calves, assess their condition and arrange for their care.

As of last weekend, the groups have saved 85 orphaned calves and placed them under care. Once the calves are healthy – and producers have rebuilt barns, fences and other facilities – the club members will return them to their original home.

The fires came at a particularly difficult time for cattle producers, a time when many cows had just given birth. One rescued calf was just a few days old, Schlochtermeier said, and was still nursing. Fortunately for the calf, it was able to get colostrum from its mother, which will help its chances of future health.

Many other calves are 2-3 months old. All of the rescued calves will receive an antibiotic and B12 vitamin, as well as milk replacement, often bottle fed by the volunteers. Schlochtermeier said the Hillsboro Veterinary Clinic has provided some medical care.

Most foster families have taken between two and six calves, Schlochtermeier said. Right now, they don’t know how long they’ll have to care for the animals.

“This is a huge undertaking,” she said. “The condition that some of these calves are coming in …”.

Gathering her emotions, she continued: “This is going to be a long-term thing. The farmers don’t have anywhere to go with their calves right now. There is a lot of work to be done and a lot of commitment needed to keep these babies alive.”

The group has established a Facebook page for people who want to get involved with the effort. On Facebook, search for “Orphan Calf Relief of SW Kansas.” Relief funds have also been set up at Ashland Feed and Seed, Meade Co-op, and at Country Feeds in Montezuma.

Those interested in donating money, products or anything else may contact those businesses directly, or call Schlochtermeier at 785-483-0421.

Official figures for cows lost in the fires that affected parts of 21 counties are not available, but unofficial reports indicate that many ranchers lost hundreds from herds that they’ve spent many years building. The calves are an important connection to bloodlines that the ranchers have worked hard to establish.

“We’re trying to give them peace of mind that their calves are being taken care of while they get the rest of their farm back together,” Schlochtermeier said.

Sidebar: How to help those affected by the wildfires

Here are some ways you can help cattle producers and their families who were affected by the wildfires in southwestern Kansas:

On Facebook: Search for “Orphan Calf Relief of SW Kansas”

Donations: Contact one of the three businesses that have set up accounts for relief funds: