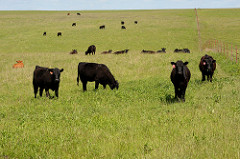 MANHATTAN, Kan. – A Kansas State University study has shown that cattle producers can improve their profits and add another layer of safety for their herds by using ear tags in combination with growth implants.

The Kansas State University study showed that when using the two treatments separately in stocker cattle grazing for 90 days, those animals increased live weight gain by 15 or 16 pounds.

But when the treatments were used together, “our gains were incredible,” Blasi said.

“We were picking up 30 or 40 pounds of live animal gain relative to doing one or the other alone.”

Though the actual benefit to producers’ profits will vary, at a price of 70-80 cents per pound, Blasi said the added value could be about $25. “And after you remove the cost of the products, you’re still several dollars ahead.”

Growth implants are used in beef production systems throughout the United States to increase growth efficiency and stimulate the development of lean muscle.

The university’s work was a follow-up to an earlier study in which researchers looked at the effectiveness of ear tags in reducing horn flies, which slow cattle’s growth due the stress and resulting energy loss they cause.

Blasi said the university’s newer research paired growth implants with either the ear tag or an injectable dewormer to see what the potential response would be.

Ear tags contain insecticides that reduce the fly populations and allow the cows to graze stress-free. The Kansas State study showed that cattle with one ear tag gain an additional nine pounds of live weight, and those with two ear tags gained 12 pounds.

A separate study tested the use of growth implants in combination with an injectable dewormer called Long Range, a product that was not known previously to be a deterrent to flies. Blasi and his colleagues used a digital camera and software to count horn flies in a field where cattle were grazing.

“What we observed was a significant decline in the number of flies compared to another product,” he said. “There was a dramatic difference.”

The injectable dewormer provided about 10 weeks of control for horn flies, and a single ear tag provides about eight weeks of protection.

Blasi also will be talking about this study at the Beef Research Roundup, taking place April 20 at the Western Kansas Agricultural Research Center in Hays. For more information on that event, visit www.wkarc.org.