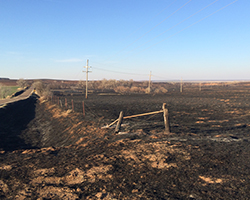 MANHATTAN, Kan. – Officials say it’s a record they never wanted to see: So far, nearly 660,000 acres have burned in Kansas wildfires this week. More than three-quarters of that number occurred in two counties, Clark and Comanche. At this point, one person has died, and thousands of animals perished or had to be euthanized.

What causes such fires? Frequently it is random chance; the forces of nature. Sometimes it’s not the wrong thing that starts a fire, but doing the right thing in the wrong way.

With the staggering scope of this week’s fire outbreak comes concern. People want to know what precautions they can take to avoid another disaster in the future.

One such way, when driving onto property such as pasture land or a hunting lease, is to be mindful of hot exhaust fumes or low-hanging mufflers, both of which can start a fire.

“If you’re pulling a trailer of any kind, always make sure your chains are hooked up where they’re not going to drag on the road,” said Brice Gibson, agriculture and natural resources agent for K-State Research and Extension’s Clark County office in Ashland. “Chains dragging on the pavement can throw off sparks as you go down the road.”

Eric Ward, excess property manager and fire planning specialist with the Kansas Forest Service, cautions property owners to be alert. “Even if you think you live in an area where ‘nothing like this ever happens,’ you still need to be mindful.”

The Kansas Forest Service participates in a national program, Firewise Communities USA, to help people protect their homes and property from fires. “ It’s like a seatbelt,” he said, “it doesn’t guarantee there won’t be a bad outcome, but it dramatically improves your chances.”

Ward said people need to stay away from the fires, no matter how curious they are about the situation.

“No drones, either,” he added, “as they’ll ground firefighting aircraft.” Drones can cause serious damage to aircraft, so if a drone is reported near a fire, the aircraft can’t move in to do their jobs.

Even something as simple as lawn care requires vigilance. “It’s a good idea to keep your lawn mowed, but it’s best to mow early in the morning,” said Jennifer Williams, communications director for the Kansas Forest Service. “Metal mowing blades striking rocks can throw off sparks and set dry grass ablaze. Try to avoid mowing when it’s excessively windy or dry.”

For many Kansans, the natural inclination is to find ways to lend a hand, but in disaster situations, some kinds of help can hinder. People interested in offering aid should contact local charities and relief agencies, Williams said.

“Sometimes people drop off donations at local fire departments during disasters such as these,” she said. “It actually isn’t helpful to bring a pile of ‘stuff’ to donate. That can complicate the job of those managing the crises. Instead, consider donating financially to one of the local departments fighting fire, or to a known, reputable charity that will assist those impacted by the fire.”

Williams said the Red Cross and Salvation Army are both very active in feeding responders and evacuees, and housing evacuees in Hutchinson.

For more information:
Jennifer Williams can be reached at 785-532-3308 or jgwilliams@ksu.edu