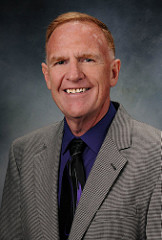 MANHATTAN, Kan. – Gordon Smith, whose successful career with global food companies led to his current job as department head of grain science and industry at Kansas State University, has been named a Fellow by the Institute of Food Technologists.

Smith’s career includes research and product development for such food heavyweights as Sara Lee, ConAgra and Jimmy Dean. Though lean on academic experience, he was chosen as department head for grain science and industry in 2015.

“Receiving the IFT Fellow is an acknowledgment that we need more people to make that switch (from industry to academia),” Smith said. “Students ask questions all the time about the industry. Professors with successful industry careers are in a unique position to provide meaningful answers.”

As vice president for research, quality and innovation at ConAgra Foods from 2005 to 2014, Smith’s accomplishments include patenting and implementing sodium reduction technologies in Orville Redenbacher popcorn. The work is estimated to have eliminated 3 million pounds of sodium chloride annually from the U.S. diet.

Smith was also director of research and development for Sara Lee Foods from 2002 to 2005 where he led the technical innovation, product/process development and quality improvement for several brands, including Sara Lee, Ball Park, Hillshire Farms, State Fair and Jimmy Dean.

From 1991-2002, he held several leadership roles in research and development for Jimmy Dean Foods, where among other accomplishments, he wrote food safety and sanitation policies for 21 Sara Lee Foods’ manufacturing facilities; obtained $1 million in funding for food safety research; and created new products for retail, foodservice, and private label markets.

“The metric in industry is impact to bottom line – profit and volume growth,” Smith said. “A lot of my life has been dedicated to new product development or product improvement.”

He has won numerous awards for his work, including the Jimmy Dean Outstanding Performance Award, Sara Lee Corporation Innovation Award, and the ConAgra Foods Excellence Award for Customer Impact.

The IFT Fellow recognizes individuals for excellence in research, service to industry and service to the organization.

“It is quite satisfying that some of the products I developed the first couple of years I came out of graduate school are still in the market,” he said. “Thirty years later, they’re still here. That’s not too bad.”

For the past six years, Smith has taught a short course through IFT titled, ‘Food Science for the non-Food Scientist,’ targeting students who work in food marketing, sales, operations and finance.

“That’s right up my alley,” Smith said. “For most of my career, I was the research and development guy who interacted with all of these people. We talk about ingredient functionality and food safety to non-technical people at a level that makes sense for them and allows them to go back and have a little better understanding of where the people they’re working with are coming from.”

Each year, only .3 percent of IFT’s members are even eligible to be named a Fellow, which is a lifetime distinction. Smith is one of eight who will be recognized at IFT’s annual meeting in June.

He is quick to praise the work of those in his department and around the university.

“I’ve worked with some industry people who I thought were the best, and now I’m working with some academics who I think truly are world class,” he said. “We have some people in this department, and some administrators in other departments who are some of the most impressive thinkers I have ever interacted with. There are a number of people like that across campus.

“I think it’s terrific. And if you’re truly committed to lifetime learning and you’re not afraid to learn from those people, there are people here willing to teach. I’ve found a remarkable attitude toward lifelong education here. I can say, ‘I get that I’m a remedial academic’ and most people are quick to help me out.”

Smith added that Kansas State University “has a remarkable presence in the food world, whether it’s from agronomy to plant pathology to feed science, animal science, grain science, food science and more.

“I see food science much broader than one department or one person. I think it’s a key strength of the university that we can truly understand how things get from the farm to the table. That is valuable to the consumers, and it will be more valuable in the future.”