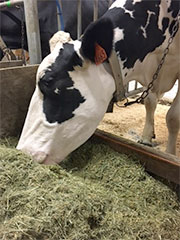 MANHATTAN, Kan. – Researchers at Kansas State University may just have found a safety net for dairy producers during times of limited water availability or drought.

Graduate research assistant Benjamin Saylor is reporting findings of a study showing that teff hay has the potential to replace alfalfa and corn silage in the diets of lactating dairy cows.

Teff is a warm-season grass native to Ethiopia, where the grain is also used for human consumption. Due to its physiology, it is well-suited to drought conditions.

The university’s feeding trials with high-producing dairy cows included a control diet and two alternative formulations of the teff diet.

It’s a surprise finding in that teff grass is relatively high in fiber and somewhat lower in protein. “You wouldn’t look at the nutrients and say this is an exceptional forage, compared to something like alfalfa,” Saylor said.

But in the feeding trials, “it performed well,” he added.

“When you go into something like that, it’s easy to say, ‘well no one is going to adopt this because everyone has been feeding ‘XYZ’ forever,’” said Barry Bradford, professor of animal sciences and industry, who supervised the project.

“For me an important initial spark for this was five to six years ago. A really well-respected dairy nutrition consultant who was working with some big herds in western Kansas, called me one day and said that we need to do something different with those herds long-term. He asked, ‘Are you guys doing anything on more water-efficient forages we can potentially use down the road?’”

Bradford said that helped to lead him and Saylor to this project, which is part of a larger collaboration with researchers in agronomy, agricultural economics and geography.

Doohong Min, an assistant professor of agronomy at K-State, was the lead investigator on a $70,000 grant from the National Science Foundation to study the viability of teff as a dairy forage, Bradford said.

Min coordinated a greenhouse study that helped to set the foundation for the feeding trials. In the greenhouse study, the researchers grew 240 teff grass samples to determine the effects of seed variety and the best time to harvest teff for yield, quality and digestibility.

They found that seed variety did not make a difference, and that in greenhouse conditions, cutting teff at 45 to 50 days after planting was the best time to optimize yield and quality.

The researchers are now working to incorporate an economic analysis, which could shed light on whether it would be profitable for producers to convert land to teff grass to help offset future water shortages.

“I think one of the main limiting factors is that teff has not been grown in field situations across the United States,” Saylor said. “Prior to the greenhouse study, there’s just not enough data for a farmer to say, ‘okay, if I plant this, this is the minimum yield I’m going to get.’ It’s just uncertain. Some additional field trials need to be done across the United States, looking at rain-fed and irrigated fields. We need more data.”

But, he added: “We see in the future that this might be a significant issue. There are industry people that are expressing interest, and the idea is to get some preliminary work done prior to a (severe drought) event. If that time comes, we can provide industry with some options without scrambling.”

Saylor’s work on this project is helping him to complete a master’s degree at Kansas State. He plans to continue his studies in dairy cattle nutrition while pursing a doctoral degree at the University of Florida next fall.