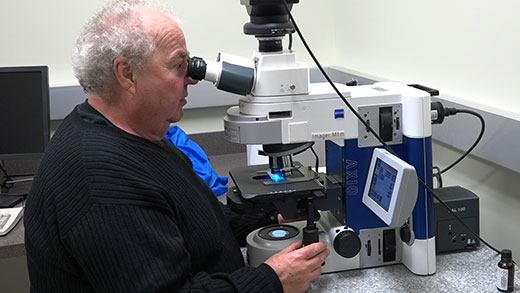 Kansas State University Research Professor Bernd Friebe is part of a team that recently identified Wsm3, a gene that provides resistance to the wheat streak mosaic virus. | Download this photo

MANHATTAN, Kan. – Kansas State University researchers have identified a gene that will provide resistance to the wheat streak mosaic virus, a disease that is currently causing economic losses in Kansas fields.

Bernd Friebe, a research professor with the Wheat Genetic Resources Center in the Department of Plant Pathology said the Wsm3 gene is just the third gene known to provide resistance to the virus – and the first that can do so at outdoor temperatures of 75 degrees Fahrenheit and higher.

Wheat streak mosaic virus is characterized by streaks of yellow-non-uniform discoloration in wheat. Plants infected as seedlings are often stunted and have a reduced head size. The disease causes yield losses so severe that in extreme cases the crop can not be harvested.

Kansas Wheat, a partnership between the Kansas Wheat Commission and the Kansas Association of Wheat Growers, reported in late May that the wheat streak mosaic virus is negatively affecting fields in western and central Kansas. Crop losses could be as high as 20 percent in some areas.

In the past, farmers’ efforts to control the virus have focused mostly on removing volunteer wheat, which harbors the wheat curl mite the primary carrier of the wheat streak mosaic virus.

The first two genes known to provide resistance to the virus were Wsm1 – identified by Kansas State University about 25 years ago – and Wsm2, which was discovered by researchers at Colorado State University.

But those two genes only provide protection in lower temperatures. Used in combination with Wsm1 or Wsm2, the warm-weather friendly Wsm3 could become part of a breeding mix that can give farmers’ much-needed relief, Friebe said.

The new Wsm3 germplasm has been released through the Kansas Agricultural Experiment Station. It is currently available to breeders through the National Science Foundation’s Industry/University Cooperative Researcher Centers program – whose members have immediate access to the germplasm – but will also be available to public breeding programs in two years.

Through traditional breeding processes, it can take several years before resistance genes show up in varieties available for planting.

“Kansas State University is putting it into Everest wheat lines,” said Friebe, referring to the university’s most popular variety currently. Everest was first released to growers in 2009, and in 2017 is the No. 1 wheat variety planted in Kansas for the fifth straight year.

The resistant gene was named Wsm1. Friebe said it took K-State researchers nearly 20 years from the beginning of the study to the point where they had developed a Wsm1 germplasm with reduced wheatgrass genetic material available for wheat breeding.

Technology has since improved, and it took researchers about six years from identifying Wsm3, which was also derived from wheatgrass, and the release of a germplasm, which has only a small wheatgrass segment. Breeding programs have also improved, and instead of 10-12 years to see the resistance show up in new varieties, it will likely take less time for Wsm3.

“Interestingly, both Wsm1 and Wsm3, as a bonus, are also conferring resistance to the Triticum mosaic virus (a related virus also affecting wheat yields) but only at cooler temperatures,” Friebe said.

Until newly-developed resistant varieties are available, growers are urged to continue with best practices for controlling the spread of the wheat streak mosaic virus in their fields. They include timely removal of volunteer wheat and grassy weeds; avoiding early planting; and planting currently-available, resistant varieties.

The Wsm3 gene is just the third gene known to provide resistance to the wheat streak mosaic virus – and the first that can do so at outdoor temperatures of 75 degrees Fahrenheit and higher.

“Leaf, stripe and stem rust each have about 70 named resistant genes. This is progress toward developing more resistance toward wheat streak mosaic virus.”