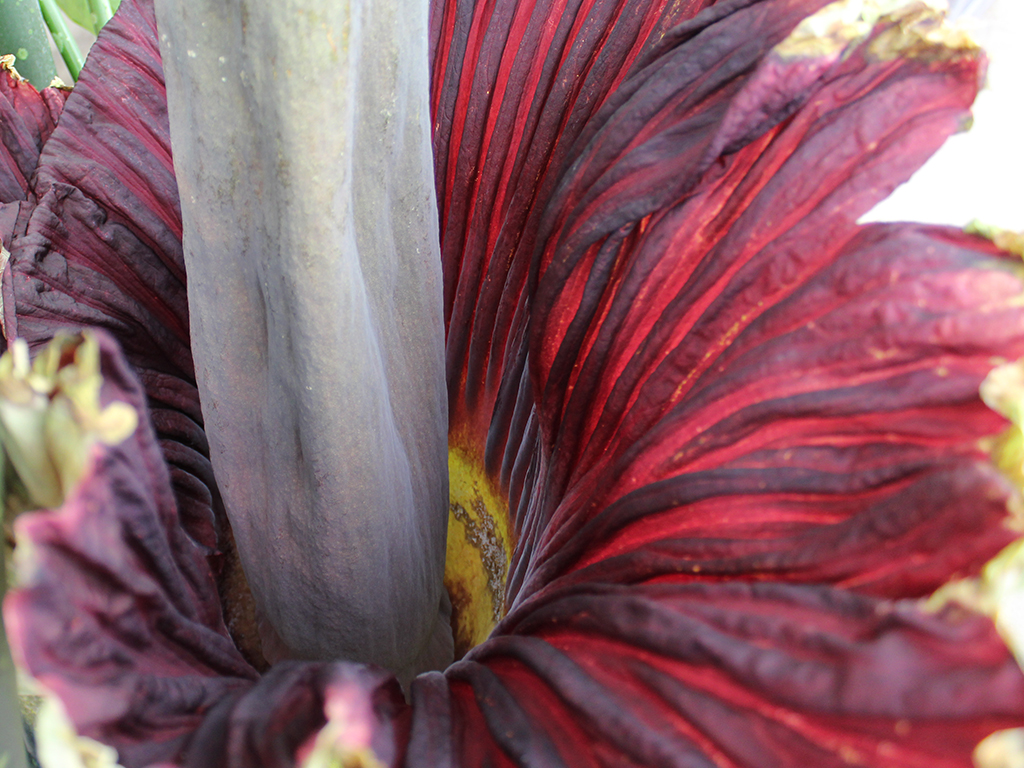 A look inside the titan arum bloom at Kansas State University's greenhouse complex on June 28th, 2017. | Download this photo.

MANHATTAN, Kan. — The initial bloom of a titan arum could take as long as 20 years, after the seed is cultivated. Kansas State University’s titan arum or “corpse flower” was cultivated in 2001 — but the last 10 days have been the longest.

“I’ll never be pregnant, never know what that physically feels like,” said Chad Miller, an assistant professor of landscape horticulture at K-State. “But I think I have a good idea of what a pregnant woman hears, as far as the questions she may get. ‘Is it time yet?’ ‘When will it happen?’ I’ve had a lot of those questions since late last week.”

In the very early hours of Wednesday morning, the spaith of the bloom (what might be thought of as the petals) began to slowly open, stopping about halfway of what has been observed with other corpse flowers around the planet, including last week’s bloom at Cambridge University. Miller said this slow opening might be due to the lack of pollination.

“Oftentimes, by this point, a lot of those other gardens have already pollinated; they’ve cut a little hole in the side of the bloom and dusted some pollen inside. With a lot of plants, once they’ve been pollinated and fertilization has occurred, they keep opening, which is actually an act of wilting.”

“We think of a fully-open bloom as something that is ‘alive,’ but actually that’s the first step in the death of that bloom,” Miller added.

At its peak, the bloom (scientifically called an inflorescence) was about 51 inches high. Amorphophallus titanum produces the world’s largest unbranched inflorescence. 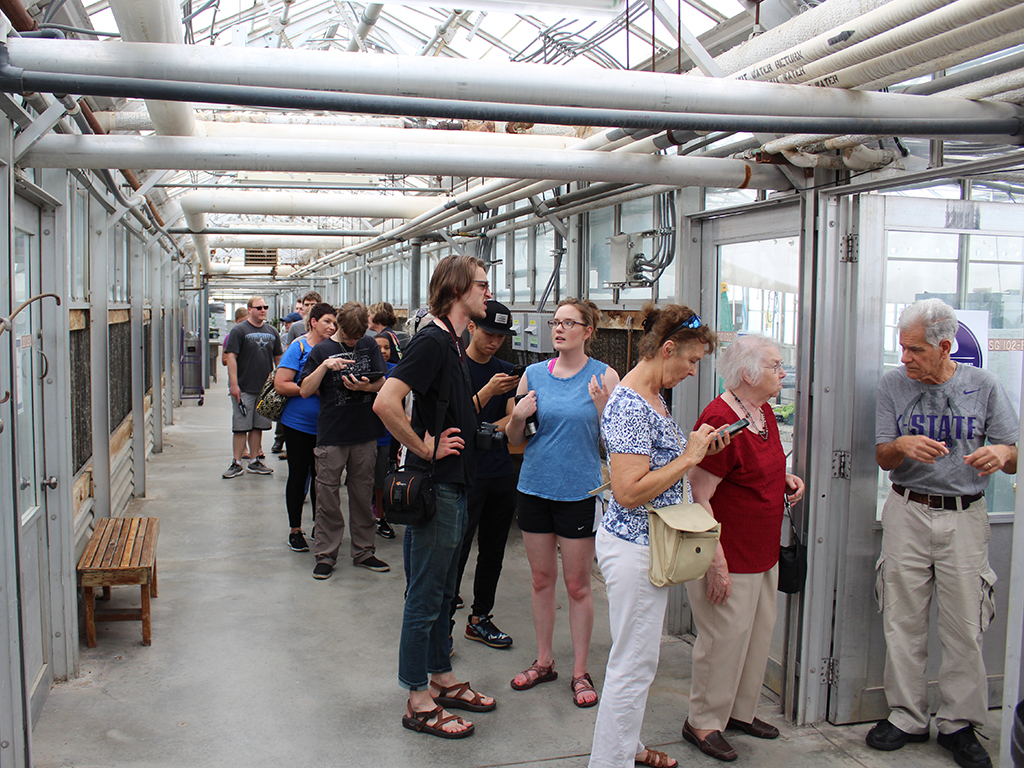 Visitors wait in line at Kansas State University's greenhouse complex to view the titan arum corpse flower bloom on June 28, 2017. The bloom only lasted a little more than 24 hours. | Download this photo.

A slow trickle of visitors made their way to the greenhouse during the past few days. Many more had been following Miller’s updates to the K-State Horticulture and Natural Resources Facebook Page, and the live video stream on YouTube. When people got wind of the bloom Wednesday morning, they began showing up in droves.

The corpse flower experience is multi-sensory — a feast for the eyes, but a sock to the nose.

“If you’ve ever driven by a dead animal on the side of the road in the middle of summer, that’s been lying there for a day or two, that’s what this pretty much might smell like, to most folks,” said Miller. The scent given off by the flower, along with the heat it generates, is meant to draw the flies that serve as pollinators. Bees and butterflies get to sit this one out. 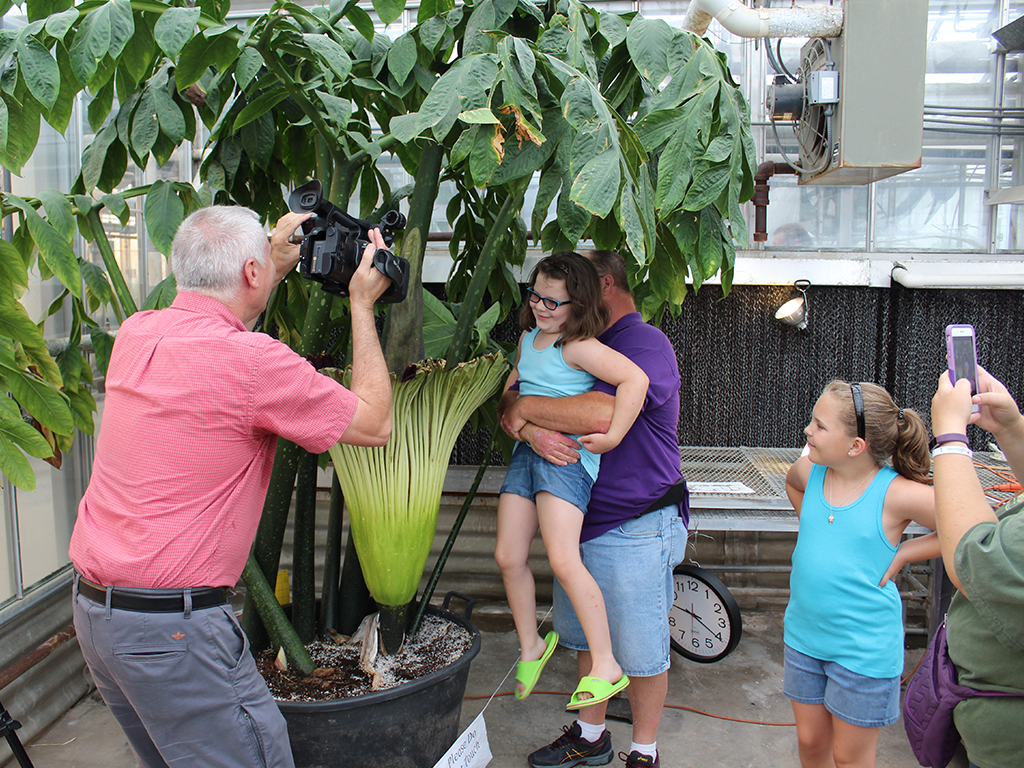 Visitors getting a close look at (and a strong whiff of) K-State's 2017 corpse flower bloom on Wednesday, June 28th. | Download this photo.

Not everyone was thrilled by the stench, which could be detected several yards from the greenhouse.

“I can’t do it,” said one visitor who works in the Department of Horticulture. “I can do barf. I have twin boys, and I can do barf — but I can’t do this!”

Since the flower is only open for about 24 hours, Miller had a narrow window for his next critical mission: pollen. He’d hoped to receive some pollen from nearby botanical gardens, but by early Wednesday afternoon, none had arrived.

“To get the best seed set, it’s imperative to get pollen from another plant,” said Miller. “Since that doesn’t look like it’s going to happen, I’m going to attempt to collect pollen, and save some to share with other universities and botanical gardens in the future.”

For anyone who missed the 2017 corpse flower bloom, Miller is hopeful that another bloom may happen as early as next year.

“Our plant is quite large, so I think we may have another opportunity to see one of these in a year or two, or three.”