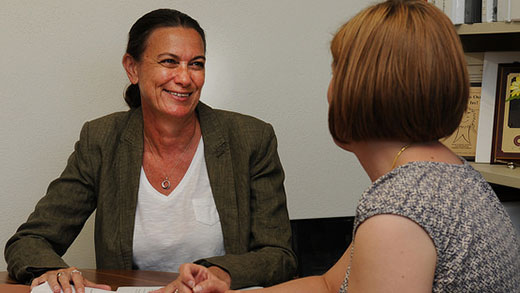 Australian Fulbright Scholar Ruth Wallace says there are a lot of similarities in regional development between Kansas communities and her home country. | Download this photo.

Ruth Wallace has been studying Kansas communities since January

MANHATTAN, Kan. —Though they are half a world apart, Ruth Wallace thinks her home in Australia isn’t too much different from many communities in the state of Kansas.

“I have found a lot of similarities here on issues about what the future looks like and who will be doing the work when you’ve got change,” said Wallace, the director of the Northern Institute at Charles Darwin University, who will complete a six-month Fulbright Scholarship in July at Kansas State University.

Wallace’s stay in Manhattan has included a lot of travel around the state to study changing demographics, economic development, workforce development, social policy and how governments make decisions, and other issues.

“About seven years ago, I was asked to get involved in biosecurity for northern Australia, and an important question we had was, ‘Who is going to do that work?’,” Wallace said. “Clearly the best people to do that were aboriginal people in that sparsely populated region, but we wondered how to build the partnerships with government to engage communities in biosecurity responses and surveillance.

“So, the partnership with K-State Research and Extension has been really valuable because that is what your extension offices do.”

Australia eliminated its version of extension several years ago, meaning a system was not in place at a local level to help citizens.

“They lost some capacity to systematically work with the public and local partner agencies and organizations to identify educational needs and provide educational programs, resources and services that help the public improve their lives, livelihoods and communities,” Hadley said.

Wallace added: “It’s very hard to see what you stand to lose until it’s gone. Once it left us – and we never had it in the integrated way that you have – we were segregated. It’s a completely different situation because it means you don’t have that same level of knowledge in your history and you do not have the vision to help in the future.”

Wallace said extension offices are a key component for economic and regional development in their communities because they can help communicate in good and bad times, share research that is relevant to local challenges, and bring people together for common goals.

“The opportunity of having K-State Research and Extension provide that link between government, community, industry and university to make sure you’re getting the most value out of research is absolutely essential,” she said. “And that’s something that I think we could really learn from in Australia and doing it in more of a systemic way like you have here.”

“One of the things I’ve really seen of extension offices is that they band together no matter what,” she said. “They’ll always help each other out. That is an incredibly strong network in hard times or when something comes out of the blue.”

Wallace said her work with Kansas State University has only begun. She believes her six-month Fulbright experience will lead to more opportunities to understand what it takes to improve regional development in Kansas and back home.

“Resources are shrinking everywhere, but the pool for economic development is really important for regions,” Wallace said. “I say this as part of a larger network of people who are trying to answer these questions internationally, and I hope that K-State Research and Extension can continue to grow its role in being able to speak to those issues.”

In the past few months, Ruth Wallace has seen first-hand how Kansas extension agents have helped citizens with local responses to such disasters as an ice storm and a brutal wildfire that took out nearly 700,000 acres of the state’s prairie.

“One of the things that happens in emergency responses is everyone comes in and focuses on the problem that is going on,” said Wallace, a Fulbright Scholar from Charles Darwin University who has been studying at Kansas State University since January. “So whether it’s a fire or a health outbreak or wheat rust or whatever, everyone focuses on that.

“But if you have actually gone through a few of those things with that community, you know that if we leave people out, we’ve missed a whole lot of the community. And if you don’t do this well, you might have a potential re-emergence of the problem because they didn’t get the information that they needed to clean up their trees, or didn’t get the information about cleaning off your boots, or whatever.”

Wallace said that when situations are handled poorly, it not only affects the immediate response, but also the community’s ability to handle future events. “You’re not going to get the same level of engagement, and it’s a lot more work,” she said.

“We can get a lot more value for investment of government policy and programs if we understand that community’s situation – what’s gone on before – and we can learn form the past and we can also help build it up so that each response improves rather than building a wall of resistance.”

Australia eliminated extension-like services several years ago, opting instead for nationally run programs to help with local programs. Wallace thinks the United States’ extension system is a much better way to operate.

“You’ve got people in extension who have worked in those places for long periods of time, who remember the last time something happened, they remember who got involved, they remember what went wrong,” she said. “Having someone like that in the room gives you an overview and an opportunity to learn that is just invaluable.”

American land-grant universities were first established in 1862 when the U.S. government passed the Morrill Act. It is the forerunner to having a locally-governed extension program in every state. Kansas has extension offices serving all 105 counties.

“It’s taken 150 years to build that shield that the state has against missing things or not planning well or letting things fall through the cracks,” Wallace said. “You have that network that really is going to hold things together very effectively.”

She adds: “I’m very envious. I wish we were doing that in Australia and I think a lot of our planning could shift to this sort of model, a more place-based approach to planning and support that is integrated and is a learning institution but also plans for the long-term.”

Australian Fulbright Scholar Ruth Wallace has been traveling around Kansas since January to study changing demographics, economic development, workforce development, social policy and how governments make decisions, and other issues.

“One of the things I’ve really seen of extension offices is that they band together no matter what. They’ll always help each other out. That is an incredibly strong network in hard times or when something comes out of the blue.”