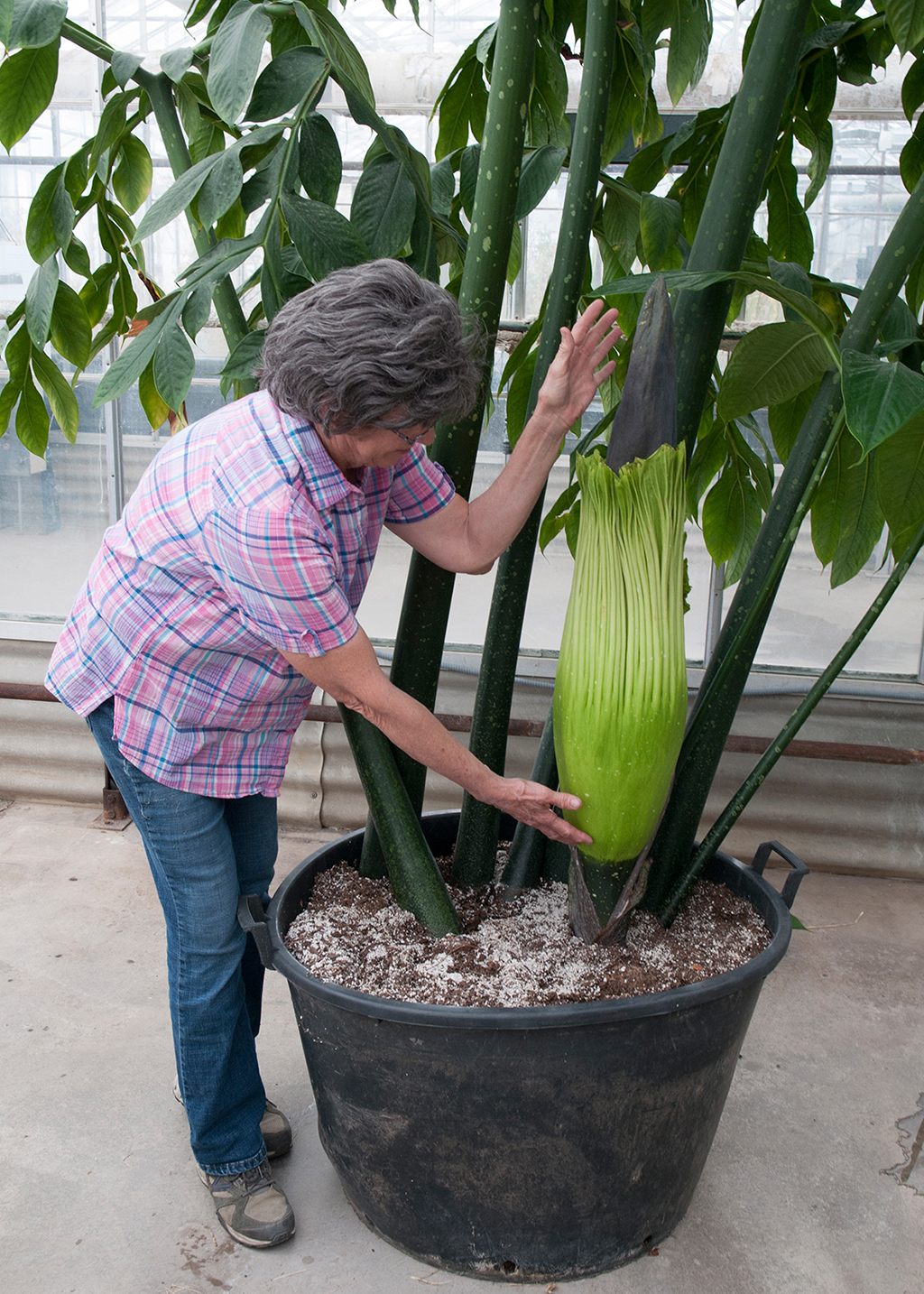 Lea Westervelt, greenhouse manager for the Department of Horticulture and Natural Resources at Kansas State University, checks on the impending bloom of a titan arum, or "corpse flower." The titan arum blooms at irregular intervals — sometimes more than 10 years may pass between blooms. | Download this photo.

MANHATTAN, Kan. — After more than 15 years of greenhouse growth, an unusual flower is about to bloom in a Kansas State University greenhouse.

Amorphophallus titanum, more commonly known as titan arum as well as “corpse flower,” is a tree-like flowering plant that produces one of the largest blooms in the world. “This flower is relatively rare, as there are limited occurrences of it flowering, especially in cultivation,” said Chad Miller, an assistant professor of landscape horticulture at K-State. “The ‘flower’ is actually a conglomerate of florets, creating an inflorescence. And this species happens to produce the world’s largest unbranched inflorescence.”

Miller said this inflorescence will be a little more than 3 feet in height, but that in their native Indonesia, they reach as high as 12 feet.

One reason for the infrequency of the blooms is a part of the flower known as the corm, a swollen portion at the base of the bloom. “The titan arum produces the world’s largest corm — these can grow to be between 100 and 200 pounds,” Miller said. “It takes several years before the corms are big enough and have stored enough energy to produce the large inflorescence.”

The rarity of a corpse flower bloom makes each one an event. In 2005, the San Francisco Conservatory of Flowers welcomed 16,000 visitors to see a blooming titan arum and expected large numbers for another such bloom just last week.

The university’s titan arum was cultivated by former faculty members, Dr. Ken and Janet Schroeder, sometime between 2000 and 2003. K-State greenhouse manager Lea Westervelt says the plant was cultivated from seed, and that this is the first time it will bloom. The bloom will only be open between 24 and 48 hours — but Miller said visitors will know it before they even see it.

“In addition to the sheer size of the inflorescence, the other ‘interesting’ part of the flowering event is the odor the plant emits,” Miller said. “The smell is similar to rotting flesh, hence the common name, ‘corpse flower.’ The spathe — the outer, frilly, modified leaf — also has a dark reddish-purple, velvet appearance. And in the spadix — the tall, pointy part of the inflorescence where all the individual florets develop, near the base — temperatures can reach nearly 100 degrees Fahrenheit at the very tip!”

While bees help pollinate many of the flowers we’re familiar with, most corpse flowers are pollinated by flies and other insects attracted to carrion. This is the reason the inflorescence smells, along with increase in temperature, to assist in spreading the odor, along with the dark flower colors to mimic rotting flesh.

Kansas State University will invite the public to view the flower. Along with typical business hours, greenhouse hours may be extended as the bloom begins to unfurl. The best place to get updates on the event is the K-State Horticulture and Natural Resources Facebook Page.