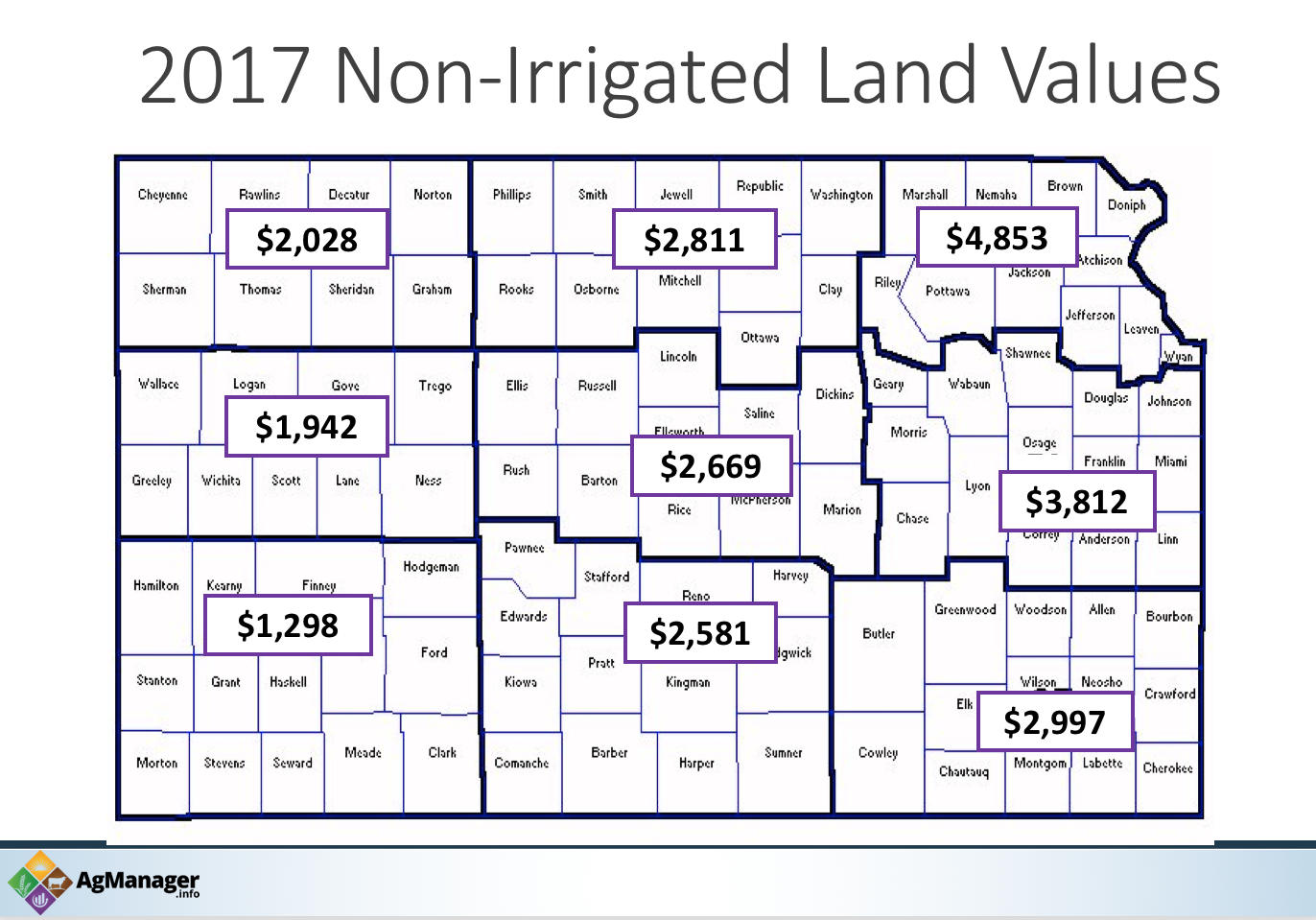 A slide from Mykel Taylor's webinar on 2017 land values in Kansas.

MANHATTAN, Kan. — Farmland prices in Kansas continued a slow, steady decline last year and a Kansas State University economist believes the trend will continue this year, saying values are being pulled down by four years of negative profitability in the agriculture sector, particularly in grain prices.

“All of the numbers are pointing down, but it’s not falling off a cliff,” Mykel Taylor said of the near-term outlook for farmland prices. “It will more likely be a slow, steady decline that appears to be in line with negative profitability in the cropping sector.”

Kansas farmland values overall last year slipped 3.9 percent from the previous year, to an average of $1,970 per acre, according to the U.S. Department of Agriculture.

Taylor said average net farm and ranch income peaked above $180,000 for cowherd operators in 2014, and more than $80,000 for those who grow non-irrigated crops, but lower cattle and crop prices since then weighed on land values, particularly in northwest and south central Kansas. Average net farm income in southwest Kansas in 2017 was about $35,000 while farmers in south central Kansas lost about $5,000. At the same time, farm-family living expenses for the past six years have been around $70,000.

“If you’re making $30,000 or $40,000 and your expenses are $70,000, that’s a lot to cover,” she said, noting that many people are covering the gap by finding jobs off the farm or by using depreciation dollars that are meant to be used to replace old machinery.

Those currently most vulnerable tend to be those who pursued an aggressive growth strategy in 2008-2013 and bought a lot of land and also younger farmers and ranchers who may have more rented land than property they own. In the latter case, those producers are still obligated to make rental payments despite lower crop prices.

“Since Kansas is a non-disclosure state, there is very little publicly available information people may use for determining county-average land values,” Taylor said.

In her work studying land values, she uses data from the Kansas Property Valuation Division of the Kansas Department of Revenue, which include actual sales transactions. She also follows surveys conducted by the USDA’s National Agricultural Statistics Service.

Irrigated land prices have fallen 13.1 percent since 2014 to an average of $2,850 per acre and non-irrigated farmland values fell 13 percent in that period to $1,870, according to the USDA. Pasture land values dipped 7.9 percent.

The data Taylor uses from actual sales transactions shows similar trends but more pronounced declines, with irrigated land down 17.4 percent, non-irrigated acreage down 19 percent and pasture land values down 21.4 percent from their peak in 2015.

In 2016, irrigated land in south central Kansas averaged $6,119 per acre compared with their neighbors to the west in southwest Kansas at $3,826.

“Drought and trade war are my X factors,” said Taylor in describing other potential variables in the direction of farmland values.

Kansas is already in dry-to-drought conditions, with the southwest part of the state in extreme-to-exceptional drought. If drought conditions persist in Kansas but not in other top-producing states, the result could be even more of a drag on farmland prices.

Additionally, if China doesn’t buy U.S. soybeans, sorghum or other commodities, they will buy from other countries. “That doesn’t mean we won’t be able to sell our crops, but it disrupts trade flow and we’d see downward pressure on prices,” Taylor said.

Related information is available at the K-State Department of Agricultural Economics website, AgManager.info

Kansas farmland values, like farmland prices across the country, continue to decline.

“All of the numbers are pointing down, but it’s not falling off a cliff. It will more likely be a slow, steady decline that appears to be in line with negative profitability in the cropping sector.”