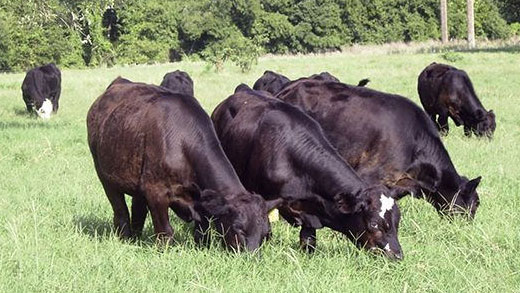 MANHATTAN, Kan. – Kansas State University researchers say they are making steady progress on a study that will help define how water intake relates to a cow’s ability to adapt to drought or heat stress.

Megan Rolf, an assistant professor of animal breeding and genetics, says the cattle industry has sparse information on how much water individual cattle drink each day. Most research to date has estimated an animal’s water intake based on an average for an entire pen of cattle, she said.

“If you’re in an area that has 50 inches of rainfall per year and you have tons of surface water, it’s probably not a big deal and not something you have to think about,” Rolf said. “But if you’re pumping groundwater to animals or if you’re in an area where there is a drought that particular year and your surface water is being depleted or of poor quality, this becomes more of an attractive trait to think about from a selection perspective.”

“It’s possible,” she added, “that we could select animals to drink less water which would be valuable in those types of conditions.”

One of the most important accomplishments that Rolf and colleagues at Kansas State University and Oklahoma State University have made is that they have determined testing guidelines for measuring water intake efficiency in cows.

The Beef Improvement Federation has test guidelines for such measures as feed intake, but no such guideline exists for water intake, Rolf said. The guidelines set the number of days that are needed to collect reliable data on intake so that it can be included in genetic evaluation of the animal.

For example, the BIF has determined that a producer should have 35-42 days of feed intake data to get accurate information on feed efficiency for a given animal or set of animals.

“We wanted to establish how many days we actually need to collect data on these animals because water intake seems to be a bit more variable than feed intake on a daily basis,” she said. “We hypothesized that this might result in a need to collect more days of data to accurately describe that phenotype,” which is a set of observable traits in the animal, such as average daily weight gain and other performance-based measures.

As it turns out, K-State’s work has determined that the same 35- to 42-day period is appropriate for collecting water intake data.

“For regions of the country or to producers who are interested in this type of data, it can be collected in the same time period as dry matter intake data as part of a standard feed intake test,” Rolf said. “We can collect an additional phenotype if a facility has that ability, and I think that is great news.”

The finding does come with some caution, however.

“The thing we have to be careful of is what is the relationship between water intake and other economically-important production traits?” Rolf said. “If we were to select for (drought or heat stress tolerance), what would be the downstream implications in terms of the performance of those animals. That’s what we’re working on now.”

K-State’s work is funded by the Agriculture and Food Research Initiative, a program of the U.S. Department of Agriculture. The project is in the fourth of five years of funding.

K-State researchers have established testing guidelines for water intake, an important step that could one day help producers select cattle that are more resistant to drought and heat stress.

KSU Beef, from the Dept. of Animal Sciences and Industry

“If you’re pumping groundwater to animals or if you’re in an area where there is a drought that particular year and your surface water is being depleted or of poor quality, this becomes more of an attractive trait to think about from a selection perspective. It’s possible that we could select animals to drink less water, which would be valuable in those types of conditions.”