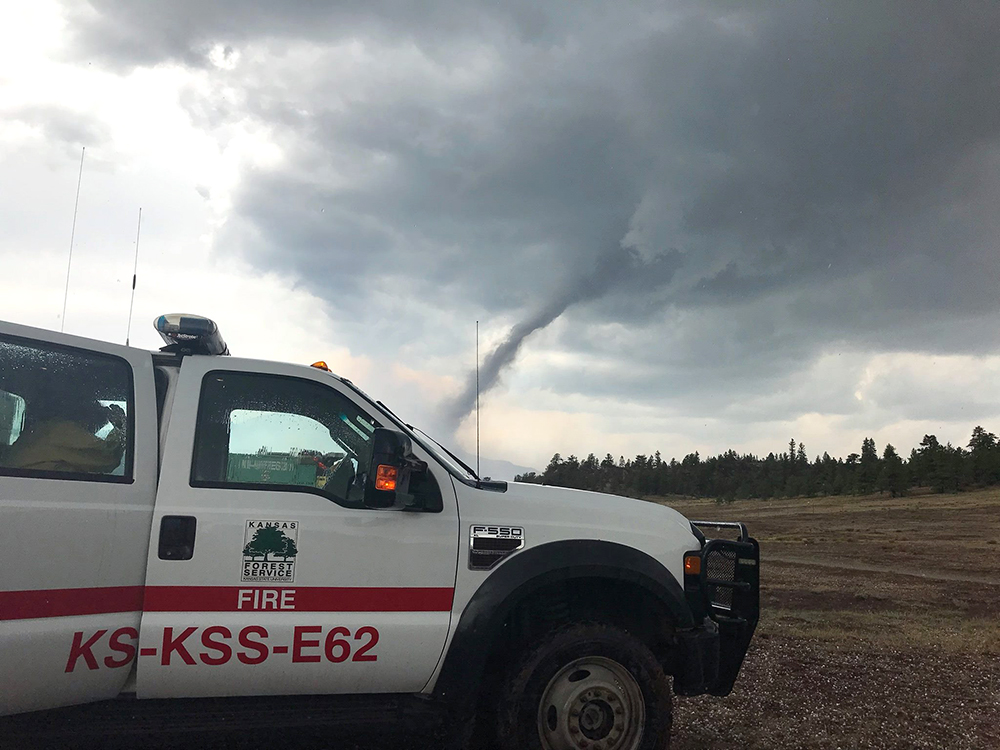 A Kansas Forest Service truck deployed to fight the Weston Pass Fire in Colorado, is forced to pause on July 5 as a tornado passes outside the town of Fairplay. | Download this photo.

As the lead wildfire-protection agency in the state, KFS also maintains mutual-assistance agreements with other states and has directly supported the wildland firefighting efforts in California, Colorado, Nevada, Oklahoma, Oregon and Wyoming.

This is a busier year than normal for firefighters.

“Nationally we are at Preparedness Level 5, which is the highest level of alert for fire agencies,” said Mark Neely, state fire management officer with the KFS. The United States reached that level two weeks earlier than last year (see sidebar).

Members of the KFS staff and several partner fire departments have contributed approximately 7,600 work hours to battling blazes in other states since April.

Most of those hours came in June and July, when 29 people from Kansas worked a combined 6,646 hours as wildfires exploded across the drought-ravaged West, and the tally is growing since then.

Right now, KFS, which is a division of the Kansas State University College of Agriculture, has 18 personnel working fire situations in California, Colorado, Nevada, Oregon and Wyoming, including two staff members: GIS specialist Darci Paull and public information officer Shawna Hartman, who are assigned to the Ferguson Fire near Yosemite National Park. As of Aug. 1, two firefighters have died and nine have been injured battling the 62,000-acre blaze.

In the last two weeks, wildfires have claimed the lives of four firefighters and five civilians in California, and one firefighter in Canada, according to Jason Hartman, KFS fire protection specialist.

As the situation worsens, more people and equipment will be needed. An additional KFS wildland fire engine will be available for assignment nationwide beginning Aug. 6. The engine will be able to provide direct fire attack, structure protection, and initial attack operations wherever they are assigned.

This year, KFS has coordinated with eight area fire departments from various parts of the state and helped place their firefighters on assignments battling western fires.

The Kansas Forest Service is the nation’s fifth oldest state forestry agency. The agency serves rural landowners, communities, rural fire districts, forest and arboriculture industries, and citizens of the state through its Conservation Tree and Shrub Planting, Fire Management, Community Forestry, Rural Forestry, Marketing and Utilization, and Forest Health programs. The Kansas Forest Service state office is located in Manhattan, Kansas, just west of the campus of Kansas State University. The Kansas Forest Service is housed as an independent agency within K-State Research and Extension. The agency receives its direction from a mission statement that reads: “Care of Natural Resources and Service to People through Forestry.”

When wildfires break out in the United States, an organization is at the ready to mobilize forces. The National Interagency Fire Center coordinates wildfire-fighting resources including people, equipment, aircraft and information services. And many of those resources come from other countries.

A multi-agency group within the NIFC determines Preparedness Levels to indicate the amount of need for resources on a severity scale of 1-5.

Preparedness Level 5 indicates “potential for emerging significant wildland fires is high and expected to remain high in multiple geographic areas,” according to the NIFC.

The U.S. was raised to PL5 on July 27. When that happened, KFS fire planning specialist Eric Ward correctly predicted international help would be sought.

Australia and New Zealand have since mobilized 200 personnel to help battle U.S. wildfires. Canada often also participates but has a situation similar to the U.S. this year.

In fact, Ward said the U.S. has sent a dozen or so personnel to Canada. “That indicates there is competition for, and shortage of, most critical resources and all available help is needed.”

According to the Aug. 1 NIFC situation report, nearly 28,000 fire personnel are currently assigned to fires in the U.S.

Through the Kansas Forest Service, 18 people from Kansas are helping battle wildfires in California, Colorado, Nevada, Oregon and Wyoming. Over the past two months, a total of 29 people from Kansas have been called into service to help with wildfire emergencies elsewhere, gaining valuable knowledge and experience to help protect people and property in their own communities.