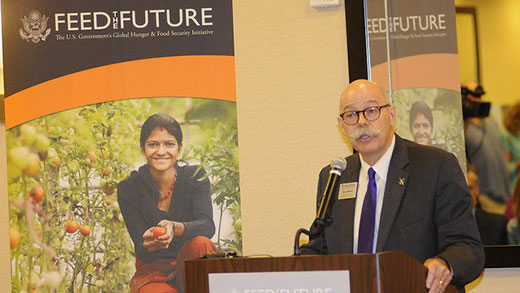 Ernie Minton, the interim dean of the Kansas State University College of Agriculture, welcomes attendees to Thursday’s announcement of $21.9 million being awarded to the university by the U.S. Agency for International Development. The funds will go toward K-State’s work with the Feed the Future initiative, the U.S. government’s effort to reduce global hunger and poverty. | Download this photo.

MANHATTAN, Kan. – Officials from the U.S. Agency for International Development announced Thursday that they have awarded $21.9 million to Kansas State University to continue funding three research labs that work to end global hunger and poverty.

In 2013, USAID awarded three “innovation labs” to K-State through the Feed the Future initiative, which is the U.S. government’s effort to end global hunger. K-State won the awards through a competitive process against programs across the United States.

“These awards don’t happen by accident,” said Jennifer "Vern" Long, the acting director for the office of agriculture, research and policy in USAID’s Bureau for Food Security. “We have a very high bar for extending programs, and it’s really a reflection of the innovative approach that these programs have taken and how they bring the best of U.S. science to bear on these global challenges.”

The three labs are:

-- The Feed the Future Innovation Lab for Sorghum and Millet, known as SMIL.

-- The Feed the Future Innovation Lab for the Reduction of Post-Harvest Loss, known as PHL.

-- The Feed the Future Innovation Lab for Applied Wheat Genomics.

In 2014, K-State also was awarded $32 million for the Feed the Future Innovation Lab for Sustainable Intensification. That project could be considered for renewal next year.

“Agricultural research takes a long time,” said Timothy Dalton, director of SMIL. “What we’ve done is position ourselves in the first phase for important achievements that we will fine tune and bring home to farmers in the next phase.”

SMIL focuses on increasing the resilience of small-scale sorghum and millet producers in the face of climate change. Drought is a key issue that can be studied in developing countries, and the findings can later be applied in the United States as well.

Over the past five years, SMIL has worked in Burkina Faso, Ethiopia, Haiti, Mali, Niger and Senegal.

“In the second phase, we will also look for new opportunities to diversify and strengthen our program. We are in the process of developing those ideas right now,” Dalton said.

PHL has worked to improve global food security by reducing post-harvest losses in stored crops, such as grains, oilseeds, legumes and seeds. The lab was especially active in addressing issues related to aflatoxin in corn – a problem that in bad years can lead to as much as $1.67 billion in losses to U.S. corn producers – but director Jagger Harvey says the project does a lot more.

“We’ve also worked on pesticides and pesticide alternatives that have been very successful,” he said. “Some of our other projects include drying, storage, developing moisture meters, agricultural education and research capacity.

“By studying things out there on the front lines, as they become more of an issue (in foreign countries), and before they reach the United States, we have a good track record, through the innovation labs as a whole, of safeguarding U.S. agriculture.”

Jesse Poland, the director of K-State’s innovation lab for wheat genomics, said his team has made important advancements in using genomic tools to accelerate wheat breeding.

“If you look at the standard breeding process, it takes anywhere from 10 to 12 years to go from crossing wheat varieties to releasing and deploying a new variety,” Poland said.

Using information from the recent release of the wheat genome, he said K-State researchers are using genomic tools to build prediction models on yield, disease resistance and other traits.

“We can know how that variety will perform by year 3 or 4 of the breeding process,” Poland said. “If we can predict those accurately, we can really accelerate the selection and release of better wheat varieties.”

Thursday’s announcement was made at the Hilton Garden Inn in Manhattan during the annual Kansas Governor’s Summit on Agricultural Growth. The news was delivered by U.S. Representative Roger Marshall, R-Kan., and was followed by comments from Gov. Jeff Colyer, who worked for USAID in the early 1980s during the Reagan administration.

“By creating these innovation labs at a public land-grant university, it really is an indicator of how valuable Kansas State is not only to our state, our nation and our agriculture, but the impact that it has around the world … in education, research and in real production,” Colyer said. “Kansas State really was a leader in this 30 years ago and it is extending even moreso today.”

University Provost Charles Taber echoed thoughts that the Feed the Future initiative align well with the U.S. land-grant mission to serve the people of this country.

“For more than 150 years, Kansas State University has been living this mission of expanding agricultural research and ensuring this research gets into the hands of users,” he told the gathering.

“Now through the innovation labs, K-State is taking this mission globally, tackling challenges in food and agriculture that impact us here in Kansas but also reach far and beyond to make this world a better place to live.”

Taber also noted that since 2013, K-State’s work in the Feed the Future initiative has brought together 24 other U.S. universities, 24 foreign universities, 47 private-sector partners, 10 U.S. non-government organizations, eight other innovation labs and 49 international organizations.

Learn more about USAID and the Feed the Future Initiative at www.usaid.gov.

Kansas State University has been awarded $21.9 million to continue work that helps to reduce global hunger and poverty.

“We have a very high bar for extending programs and it’s really a reflection of the innovative approach that these programs have taken and how they bring the best of U.S. science to bear on these global challenges.” 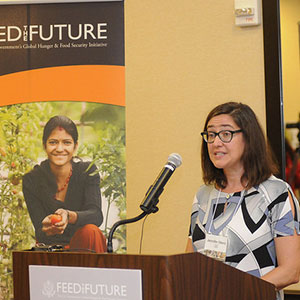 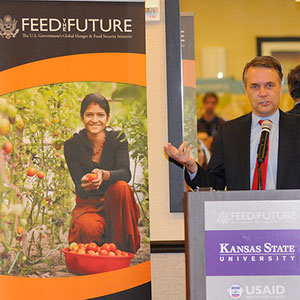