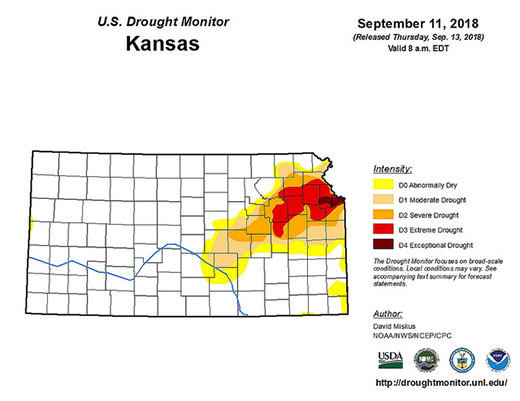 Despite late summer precipitation, the U.S. Drought Monitor showed that as of Sept. 11, 2018, a swath of counties in northeast Kansas are still dry or in drought. | Download this photo.

MANHATTAN, Kan. – A shift in weather patterns that began in early August brought welcome rain to drought-stricken Kansas, but even with the precipitation, the northeast part of the state is still parched.

“Ponds are still low. Streams are not running. There wasn’t as much benefit from the recent rains as we had hoped,” said Mary Knapp, climatologist with the Weather Data Library at Kansas State University.

Some of those counties that experienced heavy rains and flash flooding on Labor Day weekend are still in drought. The Sept. 11 U.S. Drought Monitor for Kansas shows many northeast counties still in abnormally dry to exceptional drought conditions.

“This drought had its roots in a very dry winter,” said Knapp of conditions months ago that were so widespread Kansas Gov. Jeff Colyer issued a drought declaration in March that covered all of the state’s 105 counties.

The current situation with drought in the eastern counties, but generally not in the west except a sliver along the border with Colorado, is just opposite the typical scenario, Knapp said. Semi-arid western Kansas usually tends to be drier than eastern Kansas.  Average annual precipitation in Garden City is 19.15 inches, while in Topeka it is 36.46.  As of Sept. 15, Garden City has received 19.46 inches, while Topeka has received just 18.39 inches.

To help track and record precipitation, wind speeds, soil moisture and other climatological data, Kansas Mesonet, a network of weather stations across the state, has added new stations in Chase (Elmdale) and Republic (Belleville) counties and more will come online soon, according to Chip Redmond, K-State assistant scientist and Kansas Mesonet manager.

That brings the total number of Mesonet weather stations across the state to 61. More are expected to be online in the coming months.

The new site in Chase County, particularly, adds coverage in an area that was lacking in weather monitoring equipment, even on other National Weather Service and Federal Aviation Administration networks, Redmond said.

Climatological data from the Mesonet weather stations is recorded in the Weather Data Library at K-State and accessible online at the Kansas Mesonet website.

Drought continues to plague northeast Kansas, but much of the rest of the state found relief in August and early September rainfall. K-State is expanding its network of weather stations to better monitor and record such information as precipitation, wind speed and soil moisture.

“Ponds are still low. Streams are not running. There wasn’t as much benefit from the recent rains as we had hoped.”