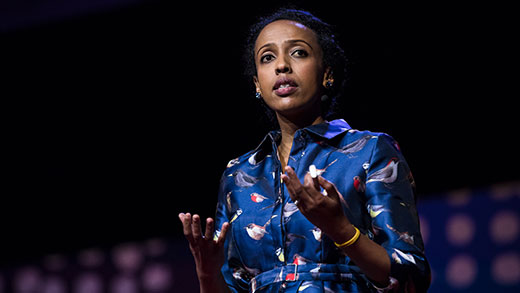 A Global Food Crisis? Speaker says it may come sooner, rather than later

MANHATTAN, Kan. – Is the world heading for a global food crisis?

Some of the leading organizations in the world seem to think so, including the World Economic Forum, which reported recently that demand for food in the year 2050 will be 60 percent higher, yet the available arable land will have shrunk due to climate change, urbanization and soil degradation.

But Sara Menker says a potential food emergency may not wait until the year 2050, and in fact may happen sometime in the next 10 years.

“High global food demand centers -- such as China, India, and Africa -- have extremely young populations that will fuel food demand at an exponential rate,” Menker said. “If you examine current production patterns in regions that export food, such as North America, South America, and Europe, the growth rate of production is not enough to match the growth of demand.”

Menker, a native of Ethiopia who quit a prestigious job as a commodities trader on Wall Street to form a company that aims to find solutions to world hunger, is the fifth speaker in the Henry C. Gardiner Global Food Systems lecture series.

She will deliver the talk, ‘Why there doesn’t need to be a global food crisis,’ in Kansas State University’s McCain Auditorium on Oct. 8 at 7 p.m. Admission is free, but patrons are encouraged to arrive early because the lecture series typically draws large crowds.

“It's not that there is not enough food (in the world), it's just that large segments of the population do not have access to food,” Menker said of the looming food crisis. “And this is a truly global issue. The world can feed itself, and we can meet the demands of a growing global population, but only if we get smart and address the vast data gaps that exist across the global agriculture industry.”

Menker is the founder and chief executive officer of Gro Intelligence, a technology company that is bridging the information gap in agriculture by providing data that can help farmers and others in the agricultural industry determine the most efficient way to grow food in different regions around the world.

“When the 2008 financial crisis started to hit and everything you consume in the world just started crashing, I started wondering how we are going to afford food and looked into investing in agriculture from a purely investment standpoint,” Menker said. “This became a four year obsession into learning about the challenges the agriculture world is facing and out of that emerged Gro and the opportunity to transform how the world understands and uses agricultural data.”

“And the potential impact of this is huge,” Menker said. “Not only can we support our clients to spend more time on analysis and far less on data procurement, but by bringing all this data together and making sense of it all, we can also help tackle major issues around forecasting crop yields and food security on a global scale.”

Her hope is that by making the best use of available information, areas of the world where there is an abundance of uncultivated arable land can help to meet the growing food needs of a world in which the population is expected to reach nearly 10 billion people by the year 2050.

“Our initial focus was in Africa because the data needs were more severe there,” Menker said. “When I began to conduct research and ask farmers about their crop insurance and forecasting yields, the questions could not be answered. I realized this was a systemic problem not only in Africa, but globally, and that tackling supposed African issues meant addressing the fragmentation of agricultural data on a global scale.”

She added that during the Oct. 8 lecture, she intends “to demonstrate that it is possible to meet any pending food shortages by committing to some kind of structural change, which can lead to increased production without having to significantly increase planted areas. This is entirely possible but depends upon using data far more smartly, to analyze, predict and plan for food shortages and address structural imbalances.”

Menker earned degrees in economics and African Studies at Mount Holyoke College and the London School of Economics. She also obtained an MBA from Columbia University.

She has recently given a TED talk on the subject of a global food crisis, which is available online.

Sara Menker, a native of Ethiopia who quit a job as a Wall Street commodities trader to form a company that aims to find solutions to world hunger, will speak Oct. 8 on the topic, ‘Why there doesn’t need to be a global food crisis.’

“The world can feed itself, and we can meet the demands of a growing global population, but only if we get smart and address the vast data gaps that exist across the global agriculture industry.”