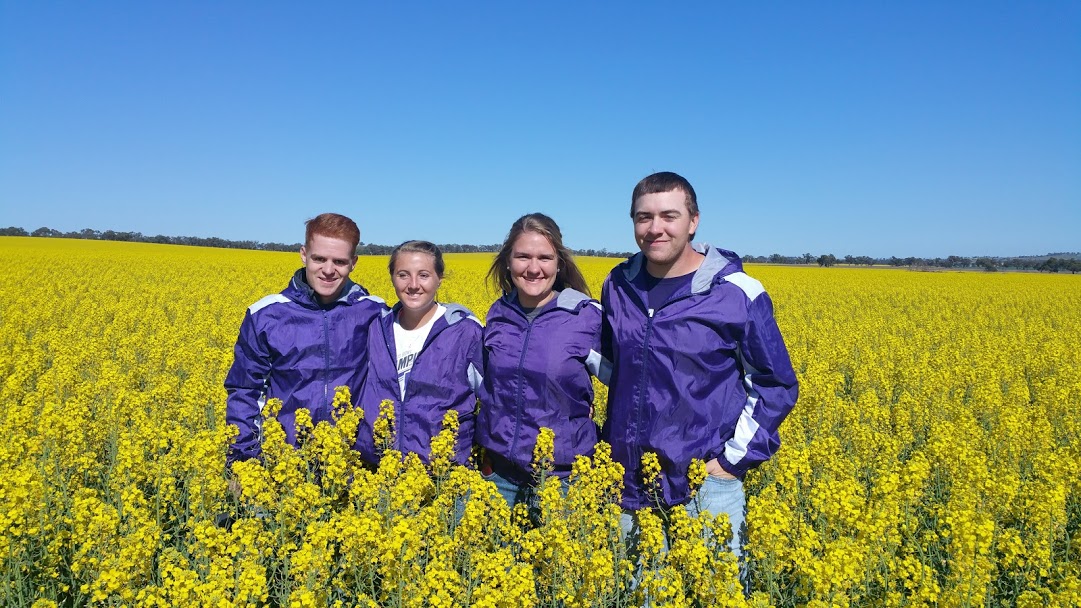 MANHATTAN, Kan. — Four members of the Kansas State University Crops Team recently returned from a study trip to Australia where they competed in the Australian Universities Crops Competition. The event was hosted by the Australian Grain Growers organization and was held in Temora, New South Wales. The K-State team traveled with seven students from Iowa State University and two students from the University of Minnesota-Crookston who also participated in the competition. A team from Virginia Tech University also competed, along with other agricultural universities across southern and western Australia.

K-State Crops Team members making the trip and their hometowns included Keren Duerksen, Newton; Kaylin Fink, Chapman; and Trent Frye, Belleville, all seniors in agronomy, and Nathan Ryan, Louisburg, Missouri, junior in agronomy. The team was accompanied by coach Kevin Donnelly, professor of agronomy. This was the fourth trip for the K-State team since 2012 to participate in the Australian competition.

The K-State team took third place in the contest, led by Trent Frye who was the eighth place overall individual. The University of Sydney placed first, followed by Charles Sturt University from Wagga Wagga, Australia.

Team members Duerksen, Fink, and Ryan were awarded a stipend from the American Society of Agronomy to cover part of their travel expenses as a result of previously placing in the top five in the U.S. Collegiate Crops Contests in Kansas City and Chicago in November, 2017. Additional sponsors of the K-State team were the Kansas Corn Growers Association, Kansas Grain Sorghum Commission, Syngenta, Landmark Implement, Polansky Seed, Norder Supply, and the K-State Department of Agronomy. The university’s College of Agriculture also provided international travel scholarships to the K-State students.

Before and after the competition, the group toured a large irrigated farm, two grain farms featuring mixed cropping systems, a sheep farm, a cherry orchard and processing facility, and a vineyard and winery. They also toured the Rhizolysimeter Center at Charles Sturt University and a field station operated by AGT, the largest wheat breeding company in Australia. Learning about canola and Australian white wheat production, ryegrass herbicide resistance problems, and the use of pulse crops such as lupins and fava beans in crop rotations were highlights for the U.S. teams.

The students also took the opportunity to learn more about Australia. The trip began with visits to popular sites in Sydney, followed by a trip to the Great Barrier Reef at Cairns. On the trip to Temora, the group visited the Blue Mountains west of Sydney. After the contest, they travelled to Melbourne and viewed the Twelve Apostles and other majestic rock formations along the southern coastline on the Great Ocean Road. Seeing koala bears in the wild at a park along the way was a highlight of the trip.