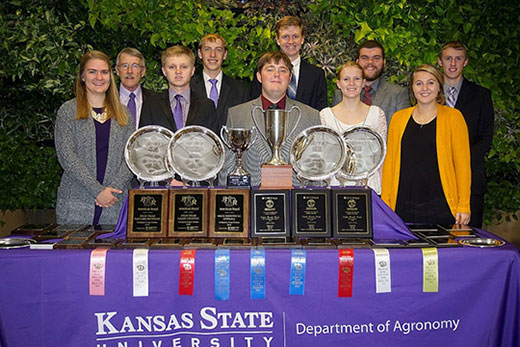 This year marks the 16th win in the past 20 years

In both contests, the K-State team took first place in all three phases of the contest: plant and seed identification, seed analysis and grain grading. In addition, team members swept the 1-2-3 individual overall placings at both events. Such a sweep of all three contest components and the top three individual placings at both contests is very rare and has only been accomplished twice before in the 85-year history of the events, both times by K-State.

In the contests, participants are required to identify 200 plant or seed samples of crops and weeds; grade eight different samples of grain according to Federal Grain Inspection Service standards; and analyze 10 seed samples to determine what contaminants they contain.

For its performance, K-State received a team scholarship award from contest sponsors at Kansas City, and CME Group provided individual scholarships to the top five students at Chicago. They will also receive a stipend from the American Society of Agronomy Reinvest Program to attend the Australia Universities Crops Competition in the fall of 2019.

The K-State Crops team has done it again – won the national championship, that is! That makes it the 16th time in 20 years.