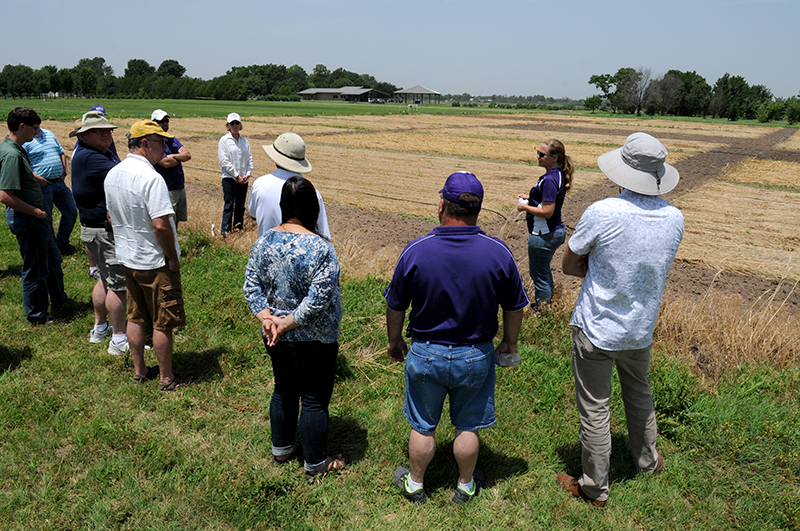 K-State Research and Extension professionals tour the John C. Pair Horticulture Center in this file photo. The center had been slated for closure, but after a process to determine methods for ensuring its self-sustainability, it remains open.  | Download this photo.

Research center saved from closure after input from industry, stakeholders

HAYSVILLE, Kan. — The John C. Pair Horticulture Center in Haysville remains open for extension-outreach and research after being slated for closure.

After receiving feedback from stakeholders, a Kansas State University task force proposed a number of ideas to broaden and modify the scope of work, while simultaneously improving operational efficiencies at the center. One proposed change included making it Kansas’ primary site for industrial hemp research.

“It’s not one, two or even three things – it’s several small steps that will lead to a new, sustainable future,” said Cheryl Boyer, K-State associate professor and extension specialist for nursery crops. “It’s a lot of work, but we are up to the task.”

Staff members are making plans for a field day and tour of the center on June 4.

“This will be the public’s opportunity to experience first-hand the research being conducted at the Pair Center and see how it connects to our everyday lives,” said Sedgwick County horticulture agent Matthew McKernan.

“Whether you are purchasing a bag of local grass seed or buying a new tree from a local garden center or nursery, it is the research conducted at the Pair Center that helps our local horticulture industry provide you with plants that are best adapted to our local growing conditions,” he said.

Yet for those involved in efforts to keep the center open, the time for celebration still has not yet arrived.

“We’ve been given a Band-Aid for the short term,” Boyer said. “But we still need to arrive at solutions for the medium- and long term.”

The John C. Pair Horticultural Center opened in 1970 as the Kansas State University Horticulture Research Center with a focus on research and extension activities related to woody ornamental crop production and utilization.

Last June, the College of Agriculture announced the center, as well as the Pecan Experimental Field, an 80-acre stand of native pecan trees in Chetopa, would be closed as a budget-cutting measure. Officials noted that difficult decisions had to be made due to reductions in base support from the state as well as recent enrollment declines that led to reduced tuition revenue.

After news of the closure decision spread in June, K-State President Richard Myers and Interim Dean of the College of Agriculture Ernie Minton were contacted by private citizens, members of the garden and nursery industry, political leaders, Extension Master Gardeners and others concerned about the loss of the Pair Center.

“I received lots of letters from businesses, and I appreciate that,” Myers said in October.

McKernan said the groundswell of support shows the Pair Center’s importance “not just to our local gardeners and garden centers, but its’ impact on the horticulture industry across the United States.”

Responding to the public, Myers, Minton and other K-State leaders charged faculty and staff with finding ways to keep the center open without reversing the budget cuts.

“We appreciate the administration for rethinking this decision,” said Jason Griffin, director of the Pair Center. “We have to give a big shout-out to local- and national-level industries that stepped up to voice their concern about the decision.”

Griffin, Boyer and McKernan were part of a task force which was formed to solicit and generate ideas and then submit a detailed plan to help the center become self-sustaining.

“We needed to come up with a feasible, entrepreneurial plan that would allow the center to keep its doors open and continue research in order to address the needs of the future,” Boyer said. “Now we need time to move forward on these plans and complete the tasks that we have laid out for ourselves.”

K-State leaders envision the center becoming the home base for industrial hemp test crops in Kansas, which would likely result in grant funding – with strict conditions. Certified plants and seed could generate operating revenue for the center.

The John C. Pair Horticulture Center near Wichita remains open after previously being planned for closure as a budget-cutting measure. Industry and stakeholder feedback from across the nation led to a task force of faculty and staff exploring options to make the center self-sustaining. One such expansion of the center’s scope could include industrial hemp research.

“Whether you are purchasing a bag of local grass seed or buying a new tree from a local garden center or nursery, it is the research conducted at the Pair Center that helps our local horticulture industry provide you with plants that are best adapted to our local growing conditions.”
— Matthew McKernan, Sedgwick County horticulture agent

Recent publications based on research from the Pair Center include: