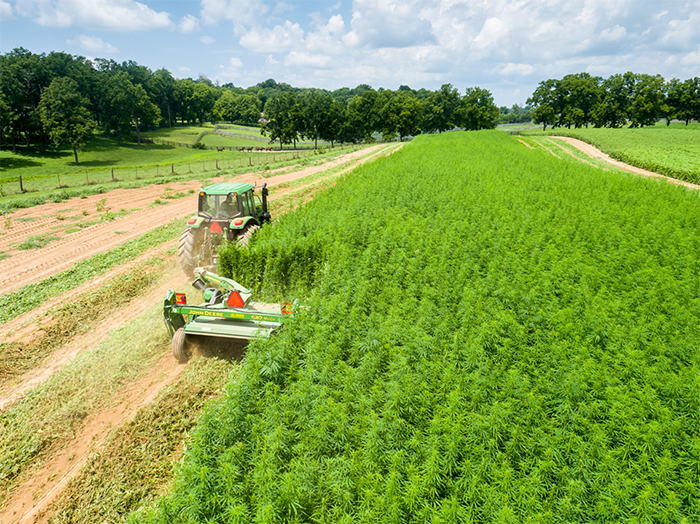 K-State Research and Extension specialists will begin growing and harvesting small, highly controlled plots of industrial hemp at research facilities around the state this year, much like the plot in this file photo from the University of Kentucky. Photo credit: Matt Barton, University of Kentucky Ag Communications | Download this photo.

MANHATTAN, Kan. — At two extremes, some hope industrial hemp can be the next big thing for Kansas farmers while others are convinced it’s fool’s gold.

Somewhere in between are Kansas State University researchers who will be looking for facts that can better inform everyone’s opinions.

In Kansas, Jason Griffin, director of the John C. Pair Horticulture Center in Haysville, leads the way in building expertise on the crop.

Industrial hemp is closely controlled by federal and state regulations because it comes from the same cannabis species as marijuana. But instead of getting people high, it is grown for fiber, seed or oil – each of which leads to a variety of end products.

Last April, the Kansas legislature’s Alternative Crop Research Act was signed into law by then-Gov. Jeff Colyer, allowing the Kansas Department of Agriculture to oversee research into the cultivation of industrial hemp.

Also last year, when the Pair Center faced the possibility of closure due to budget concerns, one of the primary options to shift part of the center’s focus was to consider industrial hemp research. Interim Dean of the College of Agriculture and Interim Director of K-State Research and Extension Ernie Minton made it clear from the beginning that he wants K-State to lead in this area of research because of its potential value to the agricultural marketplace.

Several questions loom large over this burgeoning industry, including whether hemp is an agronomic or specialty crop. Griffin says it’s both, depending on where it’s grown.

Industrial hemp is different from marijuana plants that are used for their intoxicating chemical tetrahydrocannabinol (THC). Industrial hemp contains little THC at all. Hemp can be used in the manufacture of a wide array of products such as paper, clothing, industrial textiles, insulation, body-care products and much more.

Currently, a high-profile use of hemp is for cannabidiol or CBD oil, which is touted as a possible treatment option for a number of health issues. Most of those claims, however, are unsubstantiated because it has been illegal to conduct research until recently.

The 2018 Farm Bill loosens regulations on industrial hemp research and production, removing it from the Controlled Substances Act, thus moving regulation and enforcement from the Drug Enforcement Agency to the U.S. Department of Agriculture. Still, to be legal, hemp plants must contain less than 0.3 percent THC content.

And any crop that grows incorrectly and ends up “hot” – with a THC level above the limit – must be completely destroyed.

Because the 2018 Farm Bill was signed into law in late December and was then followed by a partial government shutdown, KDA began 2019 working from the perspective of the 2014 Farm Bill but with an eye toward the changes in the new federal law – while also working to implement the new state law.

Like Griffin, Northwest Area agronomist Lucas Haag and others at K-State, KDA has a task force focused on rapidly preparing to support farmers who want to pursue growing hemp. Primary among KDA’s responsibilities are ensuring regulations are closely followed to ensure hemp is grown, not marijuana.

Last week, KDA experts and Griffin hosted a webinar for K-State Research and Extension professionals who have already been fielding questions from curious agricultural producers across the state.

Providing such a service is not only necessary; it’s urgent because K-State Research and Extension agents are already getting calls about hemp. Currently, if someone brings a sample into an extension office, the staff is legally required to show them the door. Unless someone is approved to handle the plants, they can look but they can’t touch (see sidebar).

Questions about the growing process are numerous. Among them:

Griffin said K-State Research and Extension is at the earliest steps in trying to answer these questions. The University of Kentucky and Cornell University are the current research leaders in the United States, and they are getting ready to start only their fifth year of growing test plots.

K-State’s ag research will likely include test plots at the Pair Center near Wichita, the K-State Olathe Horticulture Research and Extension Center outside Kansas City, and the Northwest Research-Extension Center in Colby.

“We’re growing for education, not to sell,” Griffin said, noting, “We have not grown any hemp yet.” He said K-State is looking at growing eight to 12 varieties in 8-by-20-foot plots, following Kentucky’s example.

He expects the unexpected, noting that varieties grown at Cornell in New York did not fare well in Kentucky or Ohio. And 10 percent of the test plots in North Carolina went hot and had to be destroyed.

“It scares me – the thought of some farmers investing tens of thousands of dollars … just to have to destroy their crop,” Griffin said.

The jury is still out regarding which growing methods will offer the best return on investment, he said: Crops grown for horticultural uses are more labor intensive – pruning and harvesting by hand – but have higher CBD content, while crops grown for agronomic uses have lower CBD content but also much lower labor costs because they can be grown in larger fields that a combine can run through.

One of the “rules of thumb” K-State scientists will test is “if you can grow good corn, you can grow good hemp.” Environmental stress will be a major factor in that assessment, because stress can cause plants to go hot – and Kansas’ climate is more stressful than Kentucky’s or New York’s, Griffin noted.

Because so many things can go wrong, his advice for K-State Research and Extension agents to pass on in their home counties and districts is to “go into industrial hemp production with their eyes wide open. Just tell them right up front, if anybody is promising you that you’re going to get rich, walk away.”

With recent changes in state and federal laws, research crops of industrial hemp can be grown legally in Kansas for the first time. K-State Research and Extension specialists are preparing to set up test plots in multiple locations around the state to find out what grows well here, why and how. Meanwhile, extension staff members statewide are working to answer questions from interested potential growers.

Every grower of industrial hemp for research purposes in Kansas must follow legal restrictions including obtaining a license to grow, said Dana Ladner, compliance education and outreach coordinator at the Kansas Department of Agriculture.

During a late-February webinar with K-State Research and Extension, Ladner said licensing requirements include state and national criminal background checks and being fingerprinted; developing a research proposal; submitting maps of the location where the hemp will be grown – and only from certified seed; continuous oversight; restrictions barring anyone who is unlicensed from even stepping near the growing hemp plants; and more.

The deadline for license applications to be submitted to KDA is March 1. For anyone who is interested in growing industrial hemp this year but has not already started the process, it’s too late.

That’s not a reason to be frustrated, however. Interested growers can instead take this inaugural year to watch, learn and plan for the 2020 growing season.

Because so much about it us unknown and so many things can go wrong, growers should “go into industrial hemp production with their eyes wide open. … If anybody is promising you that you’re going to get rich, walk away.”