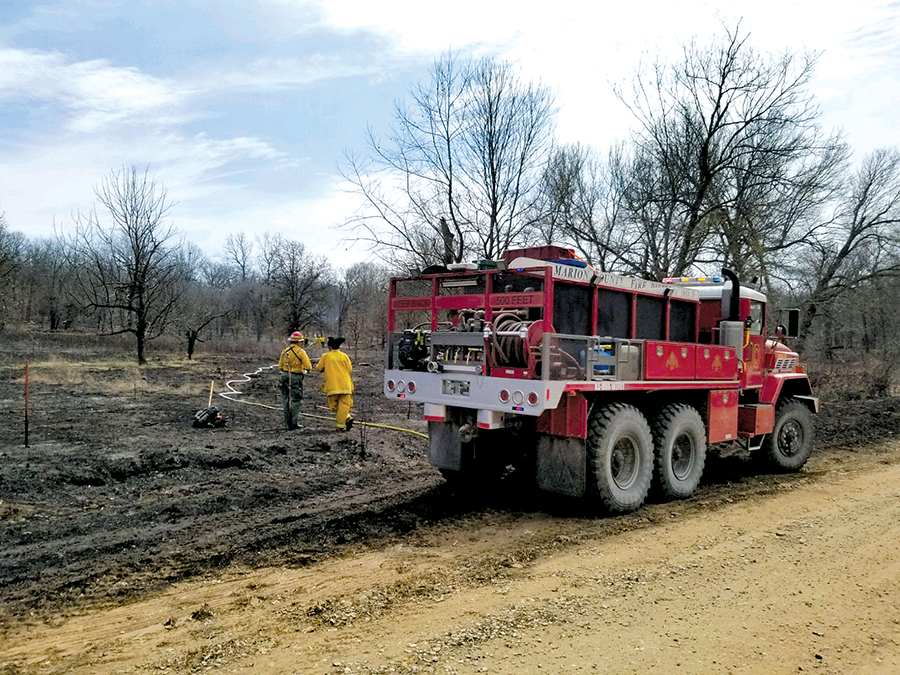 Members of the Marion County Wildland Fire Task Force work on a progressive hose lay. Fourteen members of the task force participated in the dispatch exercise for the Kansas Forest Service Hazardous Fuels Mitigation Project on March 26, 2019. | Download this photo.

The mitigation project reduced the risk of wildfire on the Quivira Scout Ranch while providing training to wildland firefighters and the county task forces.

“The exercise gave us an opportunity to test the response system and discover any potential weaknesses before we have a true wildland fire emergency response,” said Incident Command Trainee and Hutchinson Fire Department Captain Troy Mueller.

Dispatching these resources is a process administered through the Kansas Division of Emergency Management.

Both county task forces were called to the mitigation project on Tuesday with the intent of them integrating into the existing operational plan on Wednesday. As part of the operational plan, the task forces received training in wildland firefighting tactics including mop-up procedures to secure the prescribed burns conducted on Monday and Tuesday.

KFS is tasked with training, equipping, providing financial assistance for local fire departments on wildland fire. KFS also supports programs in fuel mitigation and public education. The annual mitigation project and integration of the task force activation is one of the ways KFS meets those objectives.

Thirty-five firefighters from Marion County and Johnson County were ordered to the Kansas Forest Service Hazardous Fuels Mitigation Project on Tuesday at the Quivira Scout Ranch as a way to test to prepare for a true wildland fire emergency response.

“The exercise gave us an opportunity to test the response system and discover any potential weaknesses before we have a true wildland fire emergency response.”