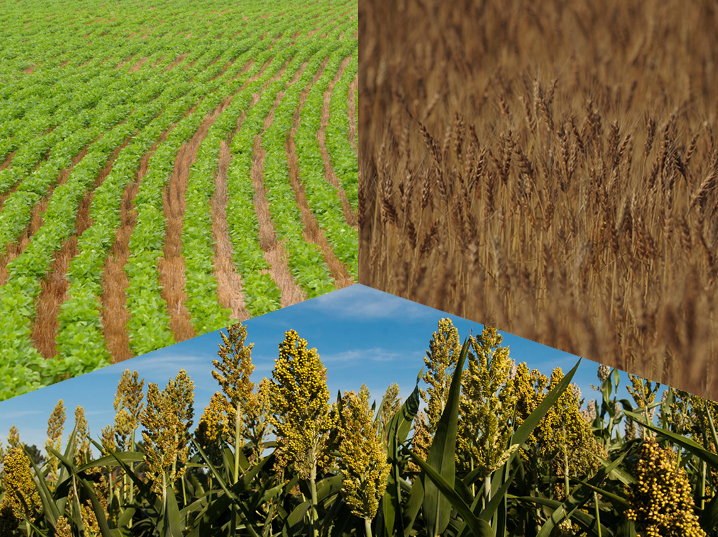 Over the course of a 12-year study, K-State researchers found neutral-to-positive benefits of growing wheat, sorghum and soybeans in properly managed cover-crop rotations.

MANHATTAN, Kan. — A Kansas State University research team is putting the finishing touches on the findings from 12 years of work in which they tested the value of growing cover crops in a no-till rotation with wheat, sorghum and soybeans.

Kraig Roozeboom, a research agronomist with K-State Research and Extension, says the group is finding that intensifying the cropping system with cover crops or double-cropping increases soil organic carbon near the surface, potentially leading to such benefits as better soil structure, aggregate size, water infiltration and more.

“We’ve demonstrated that you can grow cover crops in our environment with either neutral or positive benefits on cash-crop yields if managed appropriately,” Roozeboom said. “And there are benefits to the soil when doing that.”

The researchers conducted the study in three-year cycles, which includes harvesting wheat in June of a given year, followed by double-crop soybeans or cover crops through the summer, then sorghum planted the following May. Soybeans are planted the summer after sorghum harvest.

The cycle starts over again with winter wheat planted immediately after harvest of the full-season soybean crop. Roozeboom notes that the entire system is done with no-till farming.

Double-cropping is a strategy of growing two or more crops on the same land in the same growing season.

“The base system is wheat-sorghum-soybeans; spray out any weeds and volunteer wheat that comes out between wheat and sorghum planting,” Roozeboom said. “We call that our chemical fallow check.”

The work by K-State’s group has drawn the attention of the Soil Health Institute, a national organization that aims to raise awareness of soil health in the United States. The Institute selected the long-term experiment coordinated by Roozeboom for intensive sampling this spring. He said it is “one of dozens of sites” being sampled across North America.

“One of their objectives is to get a better handle on how to characterize soil health scientifically,” Roozeboom said.

The study, which began in 2007, has helped to establish the value of cover crops in suppressing weeds and improving soil health. Roozeboom said the results, in most years, indicate no negative impact on yields of the grain crops in the rotation, with appropriate modifications to nitrogen fertilization applied to sorghum.

“In fact, some cover crops have resulted in yields comparable to that obtained in the chemical fallow system but with less nitrogen fertilizer,” Roozeboom said. “The exception came in the summer of 2018. The previous winter and spring were extremely dry. As a result, sorghum yields were reduced dramatically if a cover crop was grown right up to sorghum planting.”

However, he adds, “sorghum yields after cover crops grown the previous summer and terminated in late fall or by frost over the winter were comparable to sorghum yields in the chemical fallow system.”

The economics of the system are still to be determined. Roozeboom notes that cover crops aren’t always the best route for growers, due to the added cost of planting and fertilizing and managing cover crops. The biggest question to researchers – and perhaps most important to farmers – is whether the added cost and time needed to grow cover crops actually benefits them in the end.

“If you’ve got the added component of grazing livestock on the cover crops, then suddenly cover crops have a much better economics component,” Roozeboom said. “Double-crop soybeans also increase the potential for a positive economic result because of the additional grain harvested from the system in most years.”

K-State’s team has published results from parts of the project, and expect to publish more findings soon. More information also is available from local extension agents, and at the K-State Department of Agronomy’s website.

Scientists have received national attention for a study indicating that cover crops help to improve the health of soil in farmer’s fields.

“We’ve demonstrated that you can grow cover crops in our environment and that there are benefits to the soil when doing that.”